Blood Eye is a grim and gritty tale of ferocious Norse raiders in the 9th century. It has bone-crunching action sequences and a Norse flavour that will leave you desperate to don your ring-maille and plunder the nearest monastery (I believe Giles Kristian is not responsible for any Viking urges you may have). 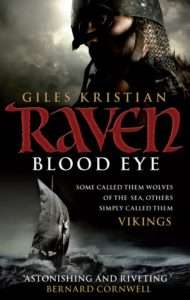 This is my first historical-fiction review, and I think it fits particularly well with Grimdark Magazine. History is immensely grim AND dark, with characters that are as real as you can get. This fine historical-fiction book is a perfect example of a morally grey world that takes you along for the ride. It’s fantastic.

Osric is a young apprentice to a mute carpenter in a Saxon village, life seems peaceful enough. Until…yes, you guessed it, fearsome Norse warriors appear from the mist in a dragon ship, warriors that have the best arms a ninth century marauder could ask for, warriors that want gold and riches and glory. For those that have read tales of Norse adventure, yes, this starts similarly to others, and it contains a lot that other Norse stories also contain.

“The Raven doesn’t need to fear of anything in the world, because he isn’t from this world”

But it is done so perfectly.

From the first page I was gripped, and by the second chapter I knew that I really loved this story. Everything about it sucked me in. The language, thick and heavy with dark-ages phrasing and feel, the characters, mean and women with relatable personalities, morally-grey characters.

It’s damn good. It really is.

“A strong hand kills, but a cunning mind will keep us alive”

Back to Osric, our only Point of View. He is a fantastic character, with enough heart and passion to send me into the shield-wall. He is young and we see the Norse characters from fresh eyes. I won’t spoil any of the story, but his arc is brilliant, and I can say book 2 is shaping up to have him as one of my favourite PoVs ever.

The supporting characters are just magnificent. With all manner of men, and women. Vikings who implore you to want to be on their ship rowing alongside them, saxons who want you to join them fighting the Welsh, and everyone in-between. I am so invested in this story, and I really urge you to read this book.

This is the first Giles Kristian book that I have read and I am immensely impressed. His description is phenomenal, so that I can smell the dirt in the Norsemen’s beards, hear the call of the Gjallahorn, feel the whipping of the sea and wind against my face, taste the iron-blood after taking a wound to the face (well, I actually did take a wound to the face. After reading a particular fight scene I picked up a Viking sword we have mounted on the wall, gave it a swing, only to have a Saxon warrior aka the door-frame send the steel-weapon swinging back at my head. The nurses in A+E did laugh when I told them I was attempting to be a Norse-raider…).

Any book that pulls me away from my medieval obsession is a good one, and Blood Eye, Book 1 of Raven well and truly took me to a place I had been to before, only giving me 1st class VIP treatment through the journey. Hats off to Giles Kristian, one of my new favourite authors!

5/5 – A ripping, roaring, red tale of Norse warriors in a foreign land. The skeleton might be the same as other books you’ve read, but Blood Eye is filled with authenticity and realism that is hard to imitate.