Blood Meridian. This novel by Cormac McCarthy is a book that disturbed me to my core and made me dwell on the realities and philosophies within it. I have struggled to type what I actually think about it and have thus far failed to put into words my feelings around it. But I cannot stop thinking about it. I’ll leave this quote here:

“The truth about the world, he said, is that anything is possible. Had you not seen it all from birth and thereby bled it of its strangeness it would appear to you for what it is, a hat trick in a medicine show, a fevered dream, a trance bepopulate with chimeras having neither analogue nor precedent, an itinerant carnival, a migratory tentshow whose ultimate destination after many a pitch in many a mudded field is unspeakable and calamitous beyond reckoning. “ 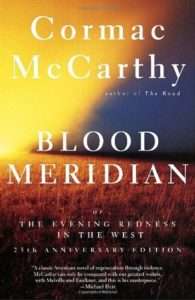 Cormac McCarthy is considered to be America’s best living author. He has written works that have been turned into films – The Road; No Country for Old Men; All the Pretty Horses and Child of God. I have had swarms of recommendations to read something by McCarthy, due to his god-like prose and his dark story-telling. After this single read, I feel it is my job to also recommend and subject everyone I meet to Blood Meridian.

“It makes no difference what men think of war, said the judge. War endures. As well ask men what they think of stone. War was always here. Before man was, war waited for him. The ultimate trade awaiting its ultimate practitioner. That is the way it was and will be. That way and not some other way.”

Blood Meridian or, subtitled as; The Evening Redness in the West (appropriate subtitle by the way), begins in the 1850s Texas-Mexico border. It follows a 14-year old boy we only know as ‘the Kid’ who flees his home in Tennessee and heads to Texas. His journey takes twists and turns leading him to become a scalphunter – joining the infamous Glanton Gang and being paid for each and every Native American scalp in a world that is just as cruel as that sentence sounds.

“The wrath of God lies sleeping. It was hid a million years before men were and only men have the power to wake it. Hell aint half full. Hear me. Ye carry war of a madman’s making onto a foreign land. Ye’ll wake more than the dogs.”

I have since found out that the Glanton Gang that McCarthy wrote about is actually a historical gang that actually went around killing and scalping Native American tribes in the 1850s and actually got paid to do so. Cormac McCarthy based this novel from the book ‘My Confession: Recollections of a Rogue’ written by Samuel Chamberlain – a man who rode with the Glanton Gang – which is considered to be the best account we have today of a soldier’s life in the Mexican War. Glanton’s Gang are established and acutely cold-hearted and professional as can be, their leader John Glanton a fearsome, gritty soldier. McCarthy’s writing of Glanton is hideously and brutally factual, showing the horror of such a leader and the stone-cold composition this person had to commit the savage acts they did.

This book centres around the character the kid and his journey within the Glanton Gang, but there is one character who this book is about. The Judge Holden. The Judge is a terrifying character, devoid of emotion and any humanistic traits. He is a giant, hairless murderer and psychopath. The Judge had monologues that displayed his philosophical thinking and his inhumanity that were in some parts exhilarant and in more parts just ridiculously menacing. He is spine-chilling and every line within this book about him will disturb you. Especially the last line, which led me to hold my head and let out a sigh for what felt like forever. As you read this book you will decide who The Judge really is. Some say he is the devil, others that he is everything evil within us, some that he is just a man with no compassion in the Wild West.

“If God meant to interfere in the degeneracy of mankind would he not have done so by now? Wolves cull themselves, man. What other creatures could? And is the race of man not more predacious yet?”

Within Blood Meridian I really discovered what the word ‘grim’ meant. There is no respite or interlude of the mass-chaos that the gang ensue. As a group of men who’s sole purpose is to scalp men, women and children, you know it isn’t going to be a light-hearted book. But McCarthy writes with a prose that is biblical, and the horrifying acts that are committed are written in the most un-gratuitous way which makes it all the more vicious. This book should have a massive ‘IF YOU ARE SQUEAMISH, AVOID’ sticker on. The brutality is moderately standard for Grimdark novels until around the 160page mark where the author really turns up that gore. Really.

“The jagged mountains were pure blue in the dawn and everywhere birds twittered and the sun when it rose caught the moon in the west so that they lay opposed to each other across the earth, the sun whitehot and the moon a pale replica, as if they were the ends of a common bore beyond whose terminals burned worlds past all reckoning.”

Cormac McCarthy’s prose must be praised here, as his accomplishment to write a book that is so poetic and metaphorical and make it seem so natural is quite incredible. I have only read this book once and I can see myself reading it many more times as I feel I have only just scratched the surface of his true thoughts and meanings within the subtleties of the language he uses. He avoids punctuation, especially speech, he writes long-winded sentences and repeats and a lot, he breaks all of the ‘literary rules’ and really makes it work.

“They were watching, out there past men’s knowing, where stars are drowning and whales ferry their vast souls through the black and seamless sea.”

I usually love to read a story that is all about being behind the main character and his friends. Wanting the character to prevail or succeed. There is none of that within Blood Meridian, until the last 60 or so pages. Blood Meridian doesn’t need anything extra. It is an achievement of writing and a book that can only be described as genius. The ambiguity of the ending left me wanted to scream and sleep at the same time and just added to the horror that I had read for the previous 350 pages.

“Only that man who has offered up himself entire to the blood of war, who has been to the floor of the pit and seen the horror in the round and learned at last that it speaks to his inmost heart, only that man can dance.”

5/5 – It’s hard to put into words how this book has made me feel. I finished it last week and still cannot comprehend it, but also cannot stop reflecting back on it. Cormac McCarthy’s writing is sublime and this book is well and truly Grimdark. Not for the faint-hearted. Please let me know if you read it or have read it, I’d love to talk about your thoughts!