Corporal Cully returns to the page in Blood Sacrifice by Peter McLean. Another entry in Black Library’s new (ish) horror line of fiction, Blood Sacrifice really plays up the horror aspect significantly more than Story one in this series, Night by Baphomet. 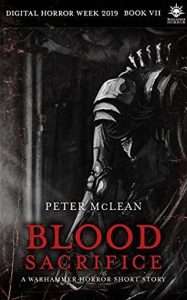 Three years and a campaign against the orks later, we find Cully on Hive world Voltoth, still mourning the loss of his friend back on Baphomet, digging a trench and waiting for the orks to come. Once again themes of PTSD and the horror and endless grind of life in the guard are key themes that McLean plays with, but this time we have more of a crack squad of troopers around Cully, as opposed to raw recruits.

Setting off into the parts of the hive city abandoned to the oncoming orks with a racketeer, a sniper, a scout, and some hardened Guardsmen, Cully just wants to make a little easy money to ease his existence. However, the score isn’t as easy as he’s been convinccii-fied, and the enemy is not who you think it is.

McLean has really nailed this second Corporal Cully story, with writing craft we’re used to seeing from the Priest of Bones author really on show in Blood Sacrifice. The scene is well set, the action full on, and the horror aspect really makes best use of the setting to deliver something that will really get your spine tingling.

I’m not sure if there are any more Corporal Cully short stories on the way, but I hope against hope their are because McLean is really hitting his stride with this character and has now shown a penchant for delving into some of the more underused lore aspects of the setting. I highly recommend Blood Sacrifice by Peter McLean—even if Baphomet by Night wasn’t for you, definitely pick this story up.