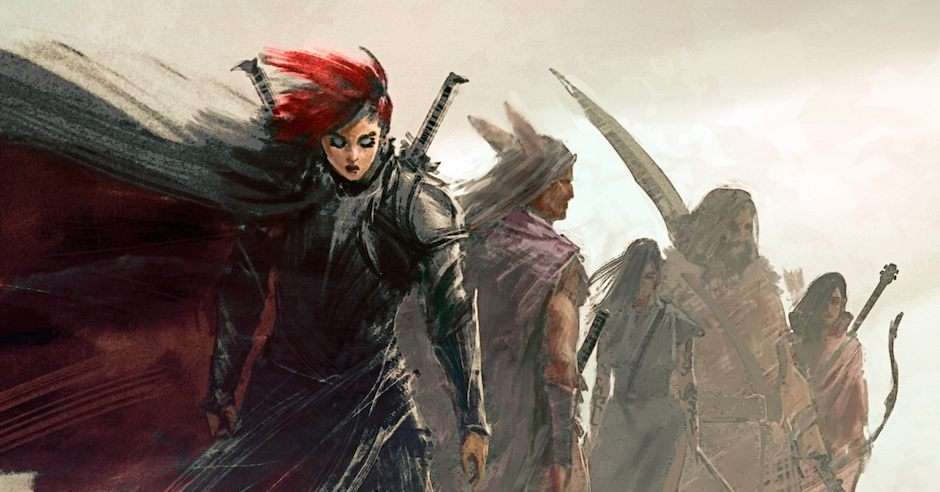 Nicholas Eames’s second novel, Bloody Rose, the follow-up to his highly acclaimed debut, Kings of the Wyld, was released with a fair bit of hype last week, some folks even claiming it was better than Kings. Well, having stormed through its 560 digital pages in the past few days, I have to agree with them.  This is one fucking great read. It basically has everything: high stakes, brutal epic battles, deep characters, engaging prose, beautiful transgressive romance, transformative emotional twists, a monster menagerie like none I’ve ever encountered, vivid and imaginative settings… and it’s funny as hell. Don’t even bother reading the rest of this review. Go buy it and read it now. 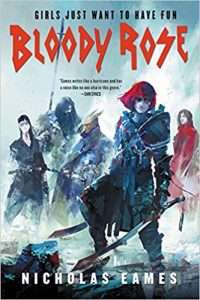 Okay, you won’t take my advice, just like my daughter, so I’ll have to explain it to you. Bloody Rose is both the story of the legendary titular mercenary, leader of the preeminent mercenary band, Fable, as well as the coming of age story of former waitress and barmaid, Fable’s new bard, seventeen-year-old Tam Hashford. Rose has returned from the siege and battle at Castia, which takes place in Kings of the Wyld, where she earned a reputation as a ferocious fighter, and she has taken her band on the road, a tour of arenas where she and her band fight monsters for the entertainment of crowds and, of course, for cash. It’s a dubious occupation for a famous mercenary, but it’s a living. One stop on the tour is in Ardburg, where Tam slings drinks and cleans tables at the Cornerstone bar. Rose and her band stop in to get hammered, and adopt Tam as their new bard, despite the vehement refusal of Tam’s father to allow her any adventuring. However, the Brumal Horde (the Heartwyld Horde from Kings plus every monster you can possible imagine and a thousand you can’t) has regrouped after its defeat at Castia and is on the move for vengeance, and every mercenary band worth its liquor is moving to stop it. So why the hell is Fable traveling in the opposite direction towards Diremarch?

Bloody Rose has so many excellent qualities, it’s impossible to include them all in this review (since you should be reading the book by now anyhow). But for the purpose of brevity, let’s look only at characters and themes. Fable comprises Tam, the bard; Bloody Rose, the leader and daughter of the famous mercenary Golden Gabe from Kings; Freecloud, Rose’s rabbit-eared lover, a druin; Brune, a shapeshifting vargyr; Cura, an Inkwitch; and Roderick, a hilarious and horny satyr. Each of these characters is imbued with a distinctive personality and each character has its own arc that is perfectly executed and timed (spread out with) the other characters’ arcs. Brune for example, has always believed he is a bear until circumstances require that he overcome that misperception to survive. Equally as important as the expert development of Fable’s band members is the development and deployment of the very powerful and intelligent villain, the Winter Queen, who has a legitimate motivation to be pissed off—her only son was killed by Rose’s father at Castia. Bloody Rose has an enormous cast of important characters, and they are all intricately tied together, not only by the story’s events, but also by its main themes.

Although Eames can be a little heavy-handed with his presentation of themes in Bloody Rose, it is the thematic aspect of the novel (in addition to the humour perhaps) that sets it at the top of the heap of epic fighting fantasy. Readers will find their own themes to ponder, but for this reviewer, the main theme of Bloody Rose is “What constitutes family?” Tam’s widowed father is a depressive with anger issues. It’s a very lifelike portrait. (Trust me, I know.) She is unable to love him and he her. Ultimately, he tells her never to come back. She enters the world alone, finds her own family in her band, and ultimately destroys the symbolic bond between herself and her biological family. All the characters in Bloody Rose must similarly deal with family issues: dickhead dads, rebellious children, loss of family members, family envy, estrangement, etc.

Another important theme in Bloody Rose is that, one way or another, we are all broken inside, like Tam’s depressed father above. In another writer’s hand, this might be terribly dreary, but with Eames’s combination of sensitivity and humour, it is extremely engaging, thought provoking, and entertaining. One of my favourite exchanges in the book discusses this theme when Tam notices her (hilarious) favourite uncle is terribly wounded.

The old man’s eyes floated for a moment before landing on her.  “Why wouldn’t I be?”

“Ah, well… there’s a sword in all of us,” he said, then winked as if he’d said something profound.

Tam’s coming of age not only includes finding a family (and romance) but also repairing the damage inside of herself. All of the characters in Bloody Rose are broken, and all seek some kind of redemption, which gives the story an emotional depth not found in many similar “genre” fiction stories. Other themes abound (but our editor-in-chief will make me rewrite this review if I try to expound on them all). Nevertheless, worth mentioning are the explorations of discrimination in Bloody Rose—“evil thrives on division,” which is profoundly relevant for today’s fucked up world, and the discussion of stories and their origin, which is one of the most grimdark (perhaps deliberately) aspects of the novel: “You didn’t get to be the villain of one story, she supposed, unless you were the hero of another.” It all amounts to an intelligent, emotional read.