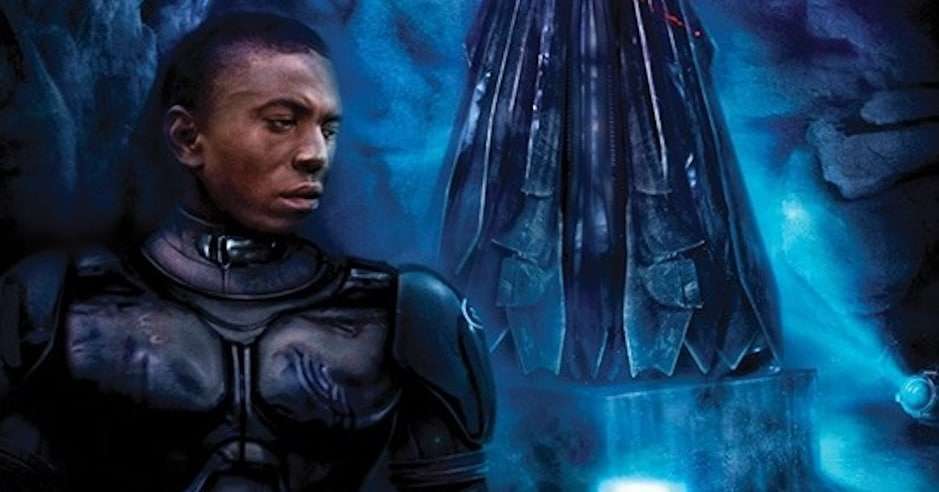 Takeshi Kovacs is back in Broken Angels, this time leading the men and women of Carrera’s Wedge into a meat grinder battle on Sanction IV. And this time he’s fighting for the Protectorate (well, for a mercenary corporation hired by the Protectorate).

Broken Angels is set in a VietNam War-styled continental battle between the Protectorate and the rebel Kempists. Kovachs is part of a mercenary crew hired by the Protectorate to bolster its forces and put down the uprising. The Kempists were meant to be a three-month pushover, but with the war at a bloody stalemate, Kovacs runs into a man who offers an opportunity for riches and a needle cast off this blood soaked world—and Kovacs takes it.

Everything you love about the universe Morgan has created is in Broken Angels in spades. A high tech world where the rich get everything and the poor either suit up in other people’s tech and go to war to profit the rich or get trodden on. Useful soldiers are re-sleeved while the grunts are left to mentally rot in the silence of their stacks. Terrifying machines rip and vapourise flesh. The Protectorate pushes and then the Kempists, using outdated but no less brutal technology, push back or nuke the land in their retreating wake. In war, where innovation is key to killing your enemy just that little bit faster, Morgan excels in the detail, and he weaves it into the story so perfectly that you barely notice it’s there.

Kovacs is once again a brilliant voice driving the narrative, his Envoy abilities brilliantly described and woven into his character to deliver everything from philosophical thinking, brutal pragmatism, and darkly funny one liners. Tanya Wardani the archaeologue (fans of the Martian history backdrop to Altered Carbon will love her inclusion) and Kovachs’ crack team of re-sleeved spec-ops soldiers are another excellent group of secondary characters with plenty of drive and depth. There is a focus on the future state of PTSD in Broken Angels, more so than Altered Carbon, and it adds a harder edge to the cast.

As ever with Morgan, it’s hard to see the bad guys, and hard to dislike them (well, for me, anyway) once you identify them. I love reading his books because each character has perspective and drive and reason, and they are all the more engaging for it.

Broken Angels is a barnstorming, expansive sequel to Altered Carbon that takes the “book two woes” so many trilogies suffer and plants a combat boot on their face. Highly recommended and I cannot wait to read book 3.