Adrian Selby’s Brother Red follows a duty-bound, female soldier whose choices carry a lot of heart as she attempts to preserve the future of her people, her kingdom, and most importantly, her creed. This latest novel expands upon the already familiar world and lore of its predecessors, highlighting Selby’s creativity and imagination. 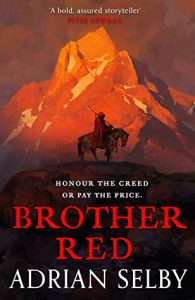 When Driwna Marghoster defends a trade caravan from a bandit attack at the start of Brother Red, everything appears business as usual for the Post soldier. That is, until a hidden corpse is discovered amongst one of the wagons. The Post, a merchant guild with a strict creed, does not deal in trading flesh. Curiouser still, the body belongs to the rarely-sighted Oskoro people, whose presence cultivates mysticism and lore. As Driwna begins to unravel the mystery, she treads a path well-worn in deceit, corruption, and pain to something altogether more terrifying than she could have conceived possible.

Brother Red once again shows Selby’s strength with action sequences: the buildup of tension, the pacing, and the way he describes what’s happening blend seamlessly together, creating a visceral experience. Through Driwna’s perspective, we experience his unique affinity for magic systems and lore. The structure of the book lends itself to the plot. The story ebbs and flows as Driwna makes connections in a natural way, keeping a solid pace throughout.

Where some readers might be surprised is with the shift in Selby’s focus with respect to the story elements. As opposed to his previous works, which are heavily character-driven, Brother Red centers more on the plot, building other aspects of the novel like characters, setting, and themes around it. Selby’s voice and prose are also more polished; his ability to say something impactful in a direct and concise sentence pairs well with other emotion-filled paragraphs.

Grimdark fans will appreciate Selby’s balance of brutal violence and hope in the backdrop of a politically-corrupt setting. Behind every character’s choice is their own reason. As Driwna is forced to accept these reasons for what they are, the reader will also be reminded of the differing perspectives that situations will inevitably create: “Bad decisions are made for what would seem to be good reasons, and these decisions may be hidden for what may seem to also be good reasons” (60).

Though all three of Selby’s works are standalones set in the same world, I would recommend reading The Winter Road before Brother Red. Selby’s unexpected connections between the stories add to the already layered plot and narrative, enhancing the experience in a positive way.