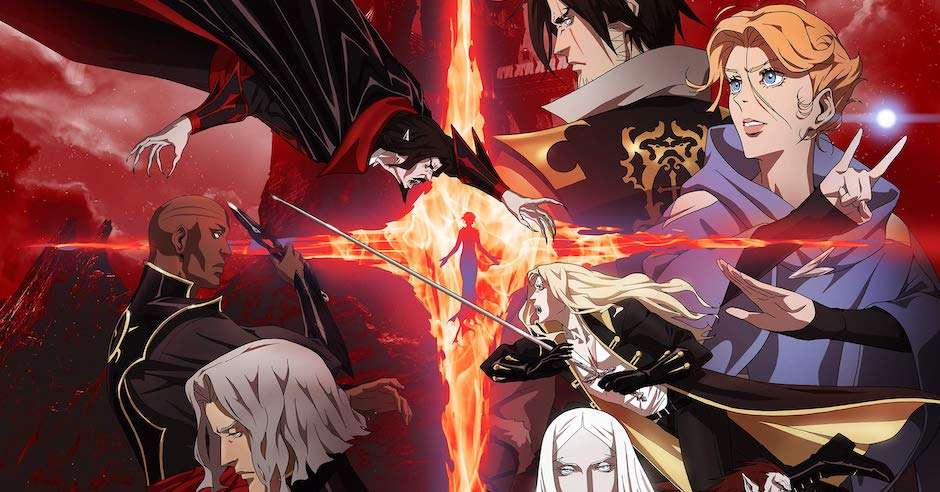 Following up the brief but brilliant first season, Castlevania S2 builds on the excellent foundation and brings an exciting, well-made adult anime to our screens for fans of the game and newbies alike. It takes what made the first season a surprise hit and expands on it with new and exciting characters that further develop the world based on the popular platforming game.

Dracula prepares his forces to annihilate the world of men for their past actions and so Trevor Belmont, Sypha Belnades, and Alucard join forces as humanity’s only hope at stopping the seemingly invincible Count. Castlevania S2 is given eight episodes this time around and the extra time allows the writers to explore the stunning world that has been created whilst adding some big players to the mix. Forgemasters Isaac and Hector are capable of using the dead to create dreaded night monsters, and the elegant but vile Carmilla threatens to steal every scene she is in, hinting at darker and bigger threats than the weary Dracula himself. The themes of grief and trauma run through this season as characters such as Hector and Isaac are given reasons for their willingness to side with the vengeful Dracula and seek the destruction of humanity. Taking the time to give reasons for villainous actions has been a strong point in the show so far and Castlevania S2 continues this with skill and quality. You may hate some of the characters but you can never claim that they are behaving without reason.

Castlevania S2 can be a bit slow at times as the extra few episodes allow for too much exposition and an emotional Dracula who doesn’t seem to be doing much other than sulking in his room like an overly powerful teenager. Pacing issues aside, when the action hits, it hits hard. Limbs and heads fly through the air in a beautiful dance of death as the final third of the season picks things up. The violence is stunning as the battles come thick and fast and it is a joy to behold some of the most disgustingly brutal deaths I’ve seen animated on TV. The main trio of Belmont, Sypha, and Alucard anchor the show and the bickering and banter between the two men provides some of the comedic relief from the blood and gore. Sypha is always a joy as she balances out the mopey and sometimes petulant men. 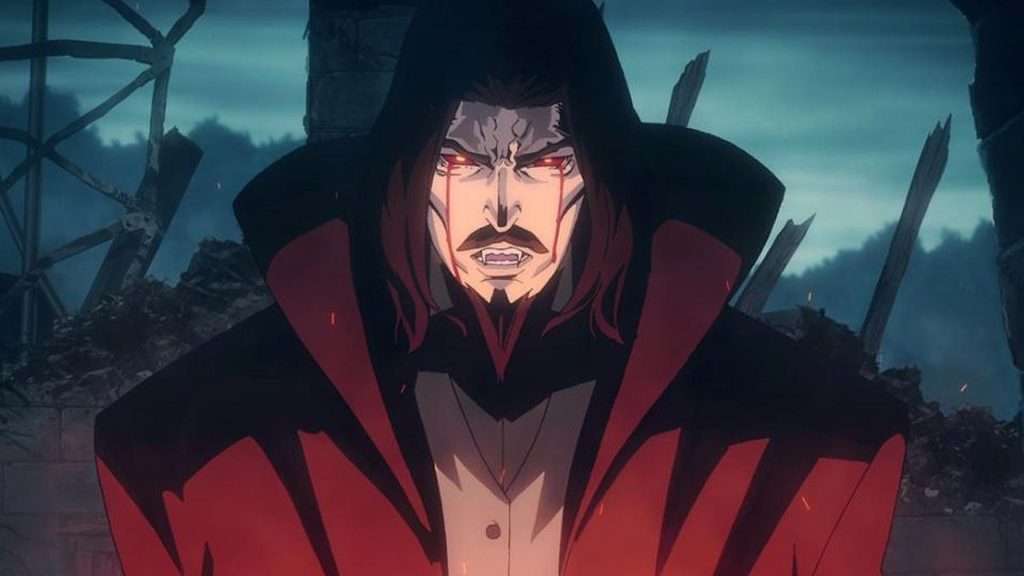 The slow burn of Castlevania S2 brings a short break from the fast-paced hyperviolent first season. It has a more melancholic mood and atmosphere this season as the pieces are all moved into place for the grand finale. For the most part, the action takes a backseat as we get to know the characters and watch as their bickering grows into a friendship and trust. It’s interesting to watch and see develop though some fans of the first season’s breakneck pace may feel differently. The apathy of Dracula as a result of his grief slows down the story but gives the audience time to evaluate the relationships he has with those around him and this adds more weight to proceedings when the eventual bloodbath begins.

Castlevania S2 ramps up the violence but builds on the excellent character work started in the first season. Excellent animation, high-quality voice acting, interesting characters, and a brilliant ending that will leave you salivating like a night monster as you wait for the next season, Castlevania S2 is possibly the best video game adaptation in history. With season 3 and 4 ready on Netflix, the best is yet to come…