Catacombs of Time is the second book in Dylan Doose’s Sword and Sorcery series. Taking place roughly 300 years after and many miles away from the events of Fire and Sword, the short novella follows the brilliant but unbalanced scientist Dr. Gaige De’Brouillard. His underlying credo as a scientist is that science, not magic, is the solution: “science is beyond sorcery. What I will come to learn will not even the battlefield between us and those with arcane blood… it will dominate it.” 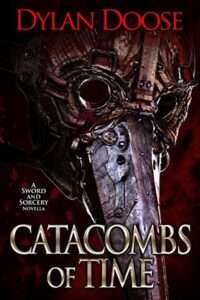 Gaige De’Brouillard is a classic Dr. Frankenstein type whose unusual and sometimes unethical experiments have allowed him to treat and cure magical curses such as lycanthropy. His impetus for scientific discovery is his own disability – a withered leg that can barely support his weight and causes him constant pain. Due to this pain, he has become addicted to an opioid-like painkiller, as well as a cocktail of injectables he uses to improve performance. Unlike Dr. Frankenstein, his main (living) subject of experimentation is himself, which leads to some nearly fatal issues at the end of Catacombs of Time.

The doctor has been tasked by the mysterious Lord Regent to capture and cure a certain blonde female werewolf and bring her back to him. Throughout the novella, Doose heavily implies that the enigmatic Regent is a certain magical character we know and love from Fire and Sword. The reader does not learn the Lord Regent’s connection to this woman in Catacombs of Time, but perhaps her identity will be revealed later in the series.

The premise is engaging and Gaige’s character well-defined, especially considering how few pages there are in the novella. Doose’s penchant for dark and gruesome settings continues here, with one particularly memorable scene detailing a “research facility” containing human body parts.

“Stacked in the corners were hundreds of limbs, heads, and torsos. Gaige thought of the many times when he was a student that he had used Butcher’s facility for his own medical research. It was for a greater good, he always told himself, and not some sort of sick curiosity.”

Disappointingly, just as Catacombs of Time seems to be picking up steam, it ends. The titular catacombs of time are set up as a fascinating place where time and space do not work as they should, but the author barely spends any time on this interesting spot and its paradoxical implications for the overarching narrative. Indeed, Doose’s choice to release a slim novella as the second book in a series is confusing. The novella could easily have been expanded or incorporated into the third novel, The Pyres. Due to Doose’s shallow treatment of many intriguing characters and ideas, many readers are likely to experience frustration upon completion of the novel.

Three Stars for Catacombs of Time.

One Star for “I Remember My First Time.”