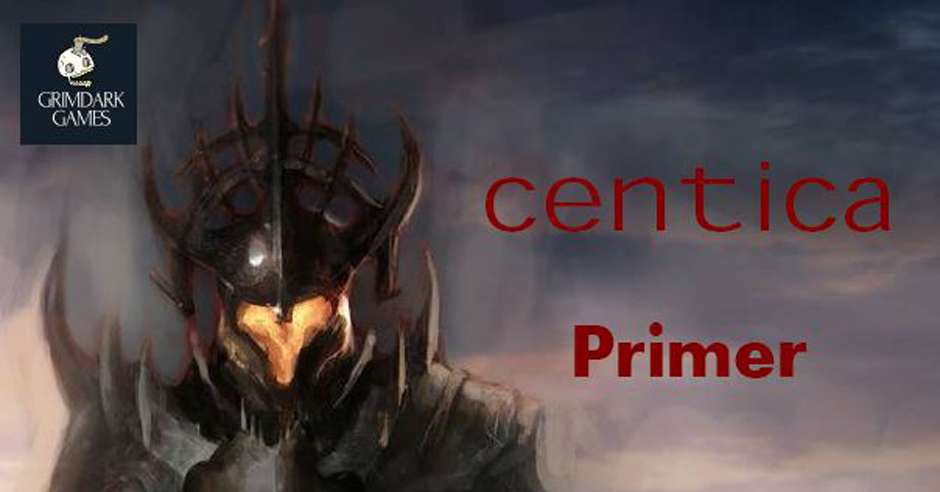 As a Game Master for tabletop role-playing games like Dungeons & Dragons, I’ve always adopted quite a free-form style for my players. For me, it’s always been far more fun to make up my own adventures, catered to what I know my players will enjoy, than to follow the officially published campaigns. To run an officially published campaign, it’s necessary to read through an entire book to ensure that you know exactly what’s going on and, even after doing so, I still find my sessions bogged-down by page-flipping and clarification of endless minutia. The Centica Primer is the perfect product for a Game Master like me, and it’s the role-playing product I didn’t even know I needed. 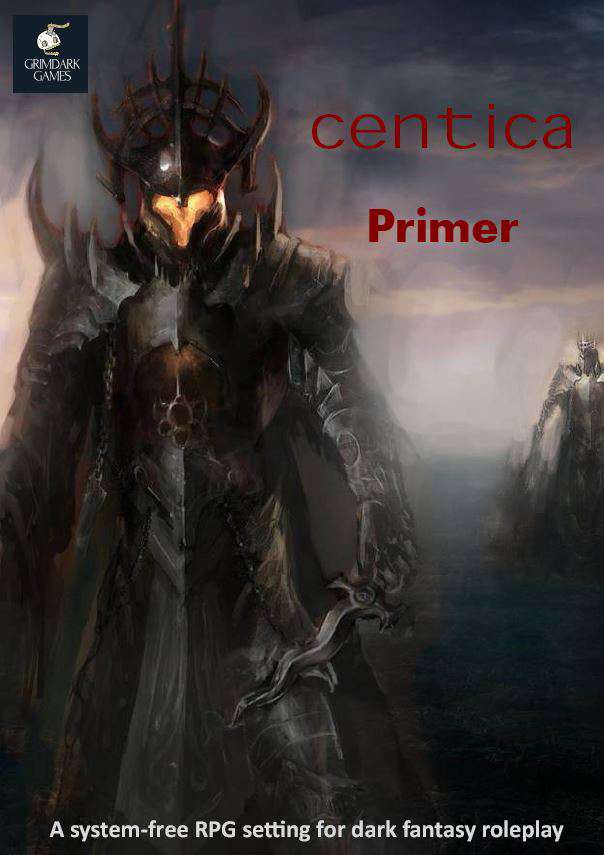 The Centica Primer is the debut product from Grimdark Games, the members of which are notable writers of the “Grimdark Fiction Readers and Writers” Facebook group. (Anyone reading this should be familiar with it. If not, then go join!) It’s a fantastic little 30-page booklet that concisely outlines a grimdark fantasy setting, complete with races, cosmology, themes, magical items, monsters and quest ideas. The opening page of the primer describes its draw perfectly:

Centica is a concise, system-free, campaign setting. This resource is designed for experienced Game Masters, who don’t require any hand-holding. This is for those who can customise their own campaigns from core concepts. Centica does not provide a new ruleset, or the hundredth version of dwarves. Everything in Centica can be integrated with your existing rule system (or possibly setting) of choice.

I’ve been the DM (Dungeon Master) for a group of players who have gone through dozens of adventures, all of which I’ve concocted for them, and loved doing so. As someone who loves writing, the act of generating my own campaign ideas, conflicts and characters is half of the fun of playing. However, after hundreds of hours of quests, I was admittedly a bit burnt out. Damn those pesky players for defeating my most recent campaign, I would think, dread settling in my gut at the thought of coming up with a brand-new original campaign for my players. We’d been playing 5th Edition D&D, which is great, but the stock-standard fantasy world of the Forgotten Realms was beginning to get a bit stale. After sending the players into their fourth necropolis ruled by an evil necromancer, I figured I needed a breath of fresh air.

The Centica Primer was perfect for this. It provides the seeds of ideas, while still leaving plenty of room for me to actually come up with the ideas. If I ran into a dead-end when plotting out the campaign trajectory, all I needed to do was flip a page and think, Aha! That should suitably terrify them. So, after receiving the primer – which is free under a pay-what-you-want system and I would encourage donating so more products like this can be made – I summoned the lads for a slightly homebrewed session of 5th Edition D&D. But this time with a grimdark twist. 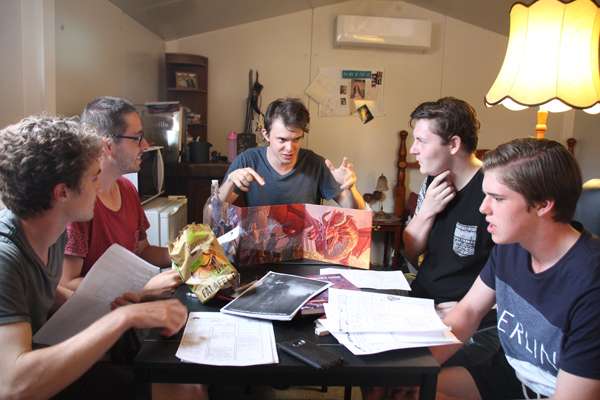 “Here’s a grimdark twist for ya!”

Centica is “a land bleeding from a thousand wounds”. The native Centics are a warlike, barbaric people who struggle to maintain their culture and brutal religion thanks to the invading Ivirate Empire. One of the player characters, Ghravihr, was an old Centic warrior with nothing but a sword and a peg-leg to remind him of the village he lost. As he sat at the fire of his new home, the village of the Vulture Clan, one of his scouts emerged from the oppressive woods with horror in his eyes. The Ivirates had come. Without the time to think of a plan, or the numbers to mount anything more than a hopeless defence, Ghravihr knew his only hope was to turn to the one force he’d sworn never to treat with: the demonic Teraphim Lords. Knowing nothing about magic, he assembled the Teraphim-touched freaks of the village, Azdule, a travelling mercenary plagued with random bursts of bizarre magic, Carnus, a socially-awkward flesh-mage, and Pravus, a horrifyingly-disfigured practitioner of plague-magic. Abandoning his village to the Ivirates, Ghravihr swore to return in a few days with a mighty weapon from the Teraphim Lords and free his enslaved people. So, with his band of blighted souls, he set off into the frosty woods of Centica, heading for a Sacred Pool, a portal to the hellish Beyond where the Teraphim Lords reside. 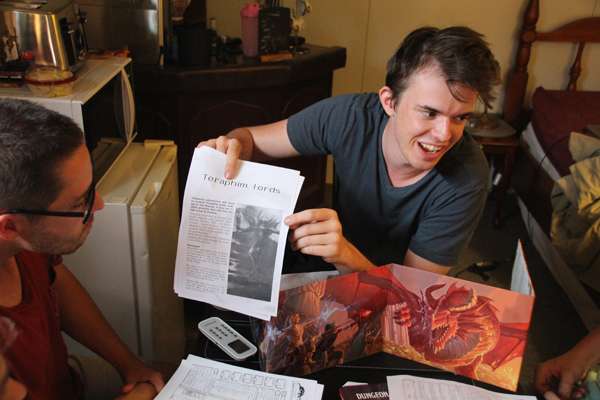 “This guy here will probably do more to you than unfriend you on social media.”

My players were excited about the new setting, so I gave them a lot of leeway with their characters. The primer can be adapted to any ruleset, although we still used 5th Edition D&D as a base. However, the players were a bit miffed that the Centica Primer is geared towards the players all being human Centics which cut out the fun of picking a race. To make up for this, I allowed them to twist the character creation rules further than I would normally allow, and they were soon happy again. For example, Carnus the flesh-mage was basically a D&D sorcerer, but I allowed him to customize his spells to reflect his grotesque character concept. Instead of telekinesis, his hands grew out, bone grinding and skin stretching, allowing him to grab far-off objects. The other characters were handled similarly, and the ideas found within the Centica Primer were the basis for these modifications. The opening combat with the Ivirates was far bloodier and more brutal than the standard D&D fights we were used to and the mood established by the primer is to thank for this.

To get to the Sacred Pool, Ghravihr led the party through ancient ruins left behind by the Ish, a mysterious prehistoric people. Upon entering the city, Azdule sprung a trap, and released the first of the primer’s monsters, a “burstling”, centipede-like abomination that promptly crawled into Azdule’s mouth and down his throat, like something from Alien. Luckily, Carnus the flesh-mage was able to force the creature out of Azdule’s body before it could take root and meld with his flesh, transforming him into a new, monstrous creature formed from the ruins of his burst-open body. The monsters featured in the primer are, for me, an absolute highlight. To make stats for them, I appropriated creatures from the D&D Monster Manual that fit, modifying them as needed.

Following this incident, the party clashed with a pack of dog-men in the ruined city, evaded traps, wisely abstained from eating a cursed feast, and found their way out of the city to the Sacred Pool. Unfortunately, the Pool was overrun by cultists, who worshipped the Teraphim Lords by cutting the throats of anyone they found and tossing their corpses into the shimmering portal of the Sacred Pool. These cultists wielded “marrow blades”, knives of bone stored within the marrow of the owner’s arms until needed. As with the monsters, the magical items provided in the primer are horrifying and unique. Luckily, thanks to the ten-foot tentacle Pravus the plague-mage happened to sport from his back and, Carnus, the flesh-mage’s ability to modify his appearance, the pair of them appeared suitably demonic to the cultists, and managed to gain access to the Sacred Pool without bloodshed. The party appeared in the blood-soaked realm of the Beyond, pulsing flesh underfoot, a red sky above, screams and whispers on the putrid wind.

At this stage, I felt that I needed a suitably horrifying encounter or two to really welcome the players to the Beyond, but I didn’t have anything lined up. So, I scanned the random encounters tables that the primer provided and lined up a few monstrosities for the players to deal with on their way to treat with Doomquiet, the sanity-shattering Teraphim Lord of this particular region of the Beyond. The first creature they encountered was a “many-horror”, this particular beastie entirely composed of thousands of human fingers and nothing else. They went on to encounter a playful “chaotic mass”, a friendly construct of bone and other refuse, a sassy enchanted sword called “Immortal Sin” that held the spirit of a traitorous Centic, a spider-like creature called a “hjaelper” and, to cap it off, a “legion”, a creature composed of hundreds of fused corpses with smaller masses splitting off the main body to chase my players across the Beyond.

After these ordeals, my players finally communed with Doomquiet, who entered their minds with an appropriately sanity-punishing series of horrifying images. Carnus the flesh-mage accepted his gift, a “Seed of Decay”, another item from the primer which causes its consumer to be endlessly followed by demons. Doomquiet didn’t tell Carnus this, of course, and just said that if he ate it and returned to the village, demons would destroy the Ivirate. So, the party returned home and led Teraphim-spawn to the village of the Vulture Clan, and the Ivirate invaders were slaughtered… along with all of the enslaved Centic villagers the party were meant to save. The campaign ended with the players horrified at what they had done, accompanied by Doomquiet’s soft laughter, audible only in their minds. 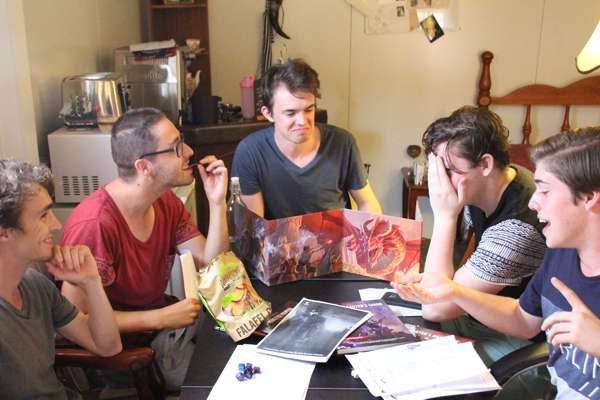 The Facepalm: a sign of suffering a grimdark ending.

The campaign was far, far darker than our usual fare, and my players loved it. The world found within the primer is great, but where it really shines is the list of monsters and items, of which there are far more than I had time to use in my eight-hour session. If the action ever quiets down, it’s easy to flip through and find something suitably disgusting. However, the primer is limited. Given another three or four sessions, I would probably have used everything the primer has to offer but, for a free product, a maximum play-time of about thirty hours is damn good. To use the primer, it’s necessary to already have experience creating your own campaigns, and a clear understanding of whatever system you’re using to run it.

If you’re an experienced Game Master of any system who enjoys freedom but wants some ideas to help generate a darker campaign, then the Centica Primer is the answer to your unholy prayers.

Get it at this link, and leave a donation if you’re feeling generous and want to help the fledgling Grimdark Games make more products like the Centica Primer.