One-part fantasy and one-part historical fiction, Marion Deeds’ new novella, Comeuppance Served Cold, intertwines the lively atmosphere of the late 1920s with a complex mix of characters. The narrative begins in medias res with a masked thief making a getaway, leaving a dead body and an endless amount of questions behind. Most pointedly of these: how did we get here? 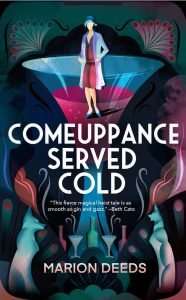 Comeuppance Served Cold takes place in late autumn of 1929 in Seattle, Washington. The city is divided in a multitude of ways including clashes over class and magic. At its center is a wealthy magus with a daughter dead set on countering him at every turn. To curb her bad behavior, he hires a lady’s companion. Meanwhile, on the other side of the city, a widowed speakeasy owner whose want of revenge for her husband’s death and fear for her shape-shifting brother are just a few of her worries. Finally, an infamous thief finds themselves in the midst of the brewing violence and conflict in Seattle’s streets all for a job that threatens to overturn everything. As all three stories intersect, one thing becomes very clear: comeuppance comes for everyone in its own time.

Deeds masterfully crafts the atmosphere of the historic 1920s from the language and tone to her descriptions in Comeuppance Served Cold. The setting comes alive and asserts itself as a dominant force in the narrative. This, combined with the novella’s structure, increases the tension until the very last chapter. The characters take shape in a unique way; Deeds utilizes dialogue and the setting to enhance each one’s particular traits, making them feel real. She also intersperses significant themes like classism, prejudice, and sexism in a way that fits with the world she has created while still relating to current times. The novella is light on magical elements, but how Deeds incorporates them makes sense for the story.

Though not under the grimdark label, do not let the jazz and smooth ambience of the gin joints fool you. Comeuppance Served Cold works up to moments of darkness, especially in regards to violence and oppression. Deeds tells her story with nuance and subtly, luring you into a false sense of pleasantry. From the first page to the very last word, I was enthralled with this tale of thievery and lies. In a world where everyone wears a mask, actions and consequences will strip them bare: “We miss all the things we leave behind a little bit, don’t we?” (118). Some will be in pieces, and others whole, but all will be left with exactly what they deserve.

Thank you to Tordotcom for sending me an ARC of Comeuppance Served Cold to review.