Cowboy Bebop is one of the most beloved anime of all time. It was never one of the most popular or widely watched but it was unique and its fans have managed to keep the flame of it alive since 1998. There’s not that much like it out there with a used universe, Western motifs, space travel, and noir crime drama. I mean, Outlaw Star, Firefly, and The Expanse are pretty much it. However, being such a well-regarded piece of animation means that any adaptation is going to have a lot of people sharpening their knives about it. 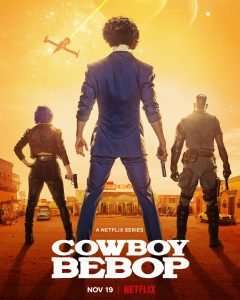 The premise is Spike (John Cho) and Jet (Mustafa Shakir) are a pair of bounty hunters living in the Sol system after the destruction of Earth. Humanity continues to thrive-ish with colonies on Mars, Jupiter’s moons, and a large number of artificial habitats. They are not very good at their jobs due to the fact they’re both so lethal that they keep killing their targets. They’re also associated with the mysterious Faye Valine (Daniella Pineda), who may or may not be a bounty hunter herself or is just passing herself off as one.

This is one of those adaptations that come with a caveat that I recommend people watch before the original. If you’re familiar with the original anime, you’ll probably enjoy this but there’s a big sense of, “Why did they change X or Y?” This isn’t a complete disaster of a live action like the Death Note one but I feel like a lot of things were simplified in order to make this reach the broadest possible audience. There’s also a few things, as a longtime fan of the anime, that I feel were inferior to the original.

The positives first: John Cho does an excellent job as Spike Spiegel. He isn’t quite as fluid and graceful as a guy based partially on Bruce Lee but that’s a tall order for any actor and a minor complaint. I also love Mustafa Shakir’s Jet as he manages to perfectly channel the anime character. He’s gruff, tough, and probably the only decent man left in the human race. Daniella Penada’s Faye is the best, though, as she manages to properly channel the charming and self-interested character we all fell in love with with only a few false moments.

Well, no, there’s one better character than Faye: Ein. Ein is awesome. Whenever Ein is not on screen, I’m like, “Where’s Ein?” Like an unironic version of that Simpsons skit about Poochie. The dog should be in every scene and when he’s not, everyone should be wondering where he is. I almost stopped watching when they briefly abandoned him.

There’s some decent-ish adaptations of episodes but the show is actually at its best when it’s trying to do its own thing. It’s bright, colorful, and reminds me of a live action cartoon in a way similar to the Wachkowski Si