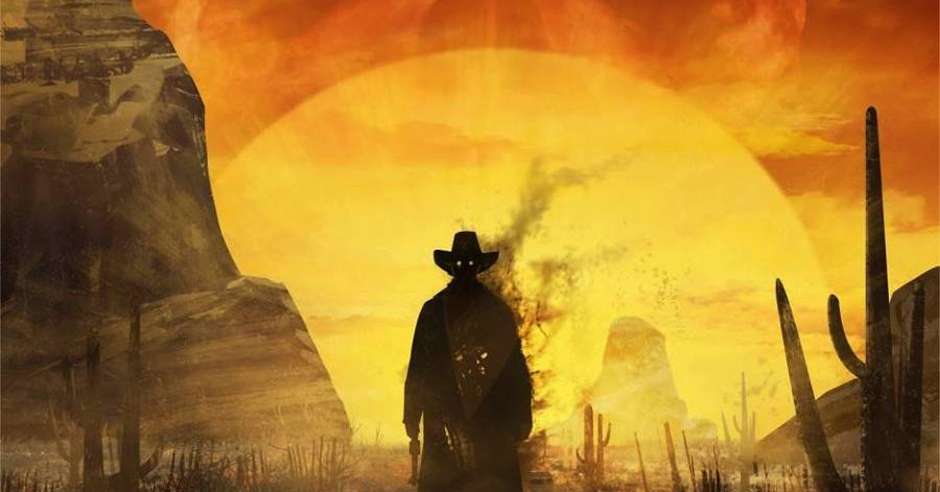 To begin the foreword to Cthulhu Armageddon, C.T. Phipps poses the question: What would you get if you crossed Mad Max with the Cthulhu Cycle? The book to follow well and truly delivers on the answer.

Cthulhu Armageddon follows the story of Captain John Henry Booth, a world-weary ranger in the “United States Remnant” some two-hundred years after “The Rising”, the event in which the Great Old Ones such as Cthulhu rose from their ancient slumber beneath the Earth, ushering in the fall of civilisation and a new age of horror and magic. The world is a blasted desert, filled with mutants, gods and monsters, and Booth braves it all for vengeance upon the dark sorcerer that stole his life. Booth is accompanied by a reformed torturer, a little girl, a tribal priestess, and a trusted comrade. It feels a lot like an old western, or King’s “The Gunslinger”, and there are clear influences from the Fallout and Wasteland game series. 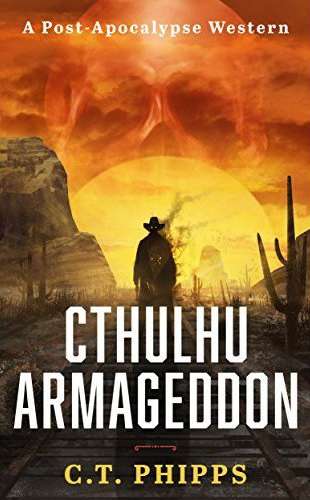 The post-apocalyptic world, inhabited by the biggest and baddest creatures H.P. Lovecraft ever dreamed up, is definitely dark and hopeless. The nihilistic, horrifying reality of the Cthulhu Mythos has burst forth from the deeps and squashed humanity underfoot, and seeing the way in which the world has dealt with that is compellingly grim. There’s a lot of grit, and the level of violence feels appropriate. However, while the larger cast have their fair share of morally ambiguous traits, Booth himself is actually quite morally upstanding and righteous, despite his claims to the contrary. He’s the type of hero who seems to be the last good man in a world gone mad, and while he’s certainly violent and aggressive when prompted, he always tries to do the right thing, and values friendship, inclusiveness, and human life, and he often thinks things such as “cavalier disregard for human life bothered me more than their reverence for the Great Old Ones”. This means that, as a huge fan of grimdark, I didn’t find myself drawn to Booth as much as I would have liked, and there were occasional tropes, such as sparing the life of an enemy only for him to return and mess everything up, that grated.

Booth does have his share of badass moments, and he’s incredibly skilled with firearms, close-combat and explosives. He’s also a good leader, pilot, and even, when he needs to be, magic-user. While this often makes for good reading, at times he can seem almost too good to be realistic. For example, when confronted with six aggressive fish-men, he narrates that “the average hybrid possessed twice the strength of a normal man and was three times as durable. Sixty seconds later, they were all lying on the ground with broken kneecaps and shattered jaws.” For me, this was one of a couple of instances where I would have liked to experience the blood, sweat and pain that should come with fighting against such overwhelming odds. It makes Booth a less human, sympathetic protagonist in these moments, and lowers the stakes. However, on other occasions the fights can be tense, edge-of-the seat affairs, and some readers appreciate larger than life heroes. Booth’s primary motivation in the story is his squad, and these characters are introduced at the beginning, and all succeed in feeling like genuine people, despite the fact that many of them appear only briefly. This ability to create attachment to a character is a great asset to the book, and little details such as one character’s seemingly feigned southern accent disappearing when she’s surprised endeared me to them. None of the side-characters are expendable cannon fodder, and one in particular, Richard the Hawaiian shirt-wearing ghoul, is a riot. One thing I found strange is that at certain points Booth claims to have “only one desire and one desire only: to return to [his] family”, yet he seems to dislike his wife, and his children never appear in the book except for one short vision at the end. As motivating elements, their absence felt odd. However, it doesn’t get in the way of the story, since Booth is already adequately motivated by his squad mates and anger at the world which has wronged him.

The world was, for me, the best part of the book. It’s like a crash-course in the Cthulhu Mythos, from shoggoths, to elder things, to the outer gods. I’d only read a few Lovecraft stories before reading Cthulhu Armageddon, but the book made me excited to delve deeper into the twisted world of nihilism and horror. Cosmic horror doesn’t seem like it would mesh well with a Mad Max-style wasteland, but it actually fits perfectly, adding plenty of colour to the post-apocalyptic setting, many of which can often be too bland and boring. Post-apocalyptic stories are something we’ve seen a lot of lately, and the addition of the Cthulhu Mythos as the world-ending event and constant threat make it so much more interesting than the classic nuclear war or undead scenarios we’ve seen a thousand times. Even when Booth passes through areas that stray close to the generic wasteland of the pop-culture apocalypse, it differs with the inclusion of gigantic statues to honour the Great Old Ones, or an otherworldly cathedral. My favourite setting of the novel was Kingsport, a town reminiscent of something out of the Fallout game series, with cobbled together buildings made from mismatched fragments of the old world. A district of Kingsport is run by Deep Ones, humanoid fish-people who Phipps casts as gangsters involved in a turf-war. The transplantation of unknowable horrors from Lovecraft’s mind into the roles traditionally filled by seedy humans works well, and Phipps’s wasteland is positively teeming with splashes of colour and magic not present in others.

Structurally, the novel is solid, but I did feel as if the magic and mystery was emphasised too much at the end, at the expense of full comprehension. The ending happens quickly, and didn’t present as many answers as I would have liked. However, a sense of mystery is certainly a key part of Lovecraft’s work, and perhaps other would feel cheated if it wasn’t used liberally in Cthulhu Armageddon. The book isn’t a particularly long read, but doesn’t feel too short either. It’s the perfect length for the stand-alone, action-packed wasteland romp that it is.

It’s written in first-person, which is a form I feel there’s not enough of. As such, we get a lot of Booth’s world-weary inner monologue, which is an interesting lens through which to view an awe-inspiring pantheon of twisted creatures. Occasionally, things can be over-explained, and the writing could be more concise. I also would have preferred it if more emotion was revealed through dramatic action rather than internal monologue, although this is perhaps more about my personal tastes. The only other minor issue I had was that there are a couple of errors speckled throughout, but not enough to significantly interrupt the flow of reading. Aside from all this, however, there is a lot of good writing and tight, gripping action scenes underpinned by serious emotional themes.

Overall, Cthulhu Armageddon by C.T. Phipps is a unique book, and definitely worth checking out. It’s a good introduction to the Cthulhu Mythos for those unfamiliar, and is filled with references that veterans would no-doubt appreciate. So, what would you get if you crossed Mad Max with the Cthulhu Cycle? You’d have to read it to truly find out.