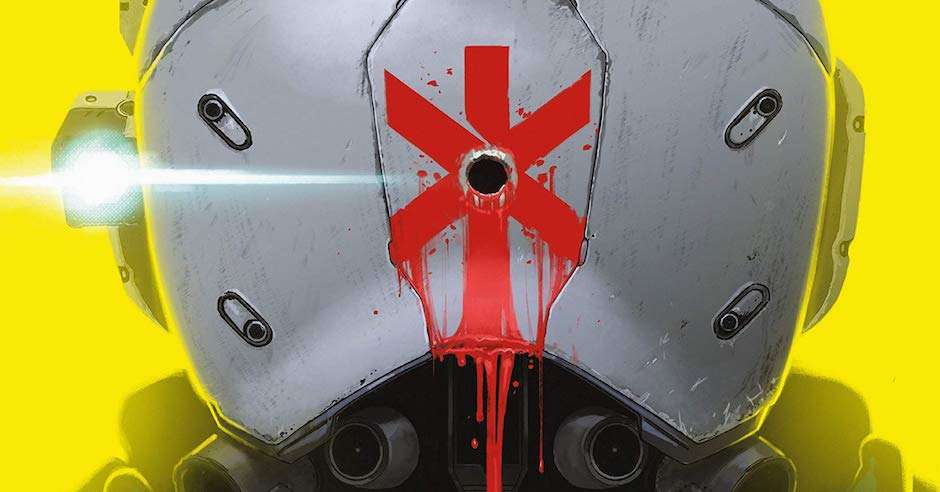 Cyberpunk 2077: Trauma Team is a ninety-six page trade paperback made up of the four issues of the same-titled series released by Dark Horse Books. It is written by Cullen Bunn and illustrated by Miguel Valderrama. As indicated by said title, it is set in the universe of the video game Cyberpunk 2077 by CD Projekt Red and itself adapted from Mike Pondsmith’s classic tabletop RPG Cyberpunk 2020. 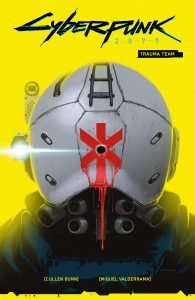 In the not-so-distant-future, health care has become even more dominated by the super-rich. If you can afford a Platnium Package, Trauma Team will send armed soldiers to your position and rescue you from whatever horrors you’re currently facing. They’ll patch you up and give you all the care you could ever want. It doesn’t matter how big of a scumbag you are, rescuing the client is the top priority of Trauma Team’s personnel.

Nadia is a member of Trauma Team suffering PTSD after her entire team is killed by a cyberpsycho named Apex. This included her lover and boss who had issues trying to reconcile the stated aims of Trauma Team with his romance. Nadia didn’t much care for this and they didn’t get to resolve this before he was horribly killed.

The premise of the four issues is that Nadia finds herself returned to the field, only to find out that Apex is now a Trauma Team customer. He’s managed to find himself trapped at the top of a skyscraper where he’s murdered the leader of a gang. The gang leader was apparently quite popular and his followers are willing to do anything to avenge him.

Nadia is thus forced into the position of having to defend the man that she hates most in the world. She also struggles with the fact Trauma Team won’t help any of the poor and dying that are spread throughout the megacomplex that they are fighting through. The Hippocratic Oath and principles of being a medic have been forgotten.

Cyberpunk 2077: Trauma Team takes heavy influences from The Raid and Dredd with the idea of a fight through a dystopian apartment building. It is action heavy and entertaining but suffers from the central premise having some unbelievable elements. Even in a dystopian corporate-run future, I tend to think that killing previous employees of the Trauma Team company would invalidate your platnium package.

Indeed, it’s kind of weird but the biggest issue I have with the comic is that I don’t necessarily disagree that money talks in Night City. It’s that I don’t believe that Apex could afford the amount of money it would take for the Trauma Team corporation to overlook he murdered an entire team of their operatives. Those soldiers are expensive after all. It’s not like he was a drug lord or corporate executive that might have paid off fines or whatever else would get to nullify his policy. It’s just never addressed and everyone acts like “he’s the client” justifies all.

In short, the plot holes of this comic series undermine the central premise. I don’t buy that the Trauma Team corporation wouldn’t invalidate Apex’s policy and leave him to die. The samurai devotion of the operatives is impressive but unbelievable without something more to back it up. Unfortunately, without that ethical issue, Cyberpunk 2077: Trauma Team is just a lot of shooting.