Brian O’ Sullivan’s “Dark Dawn” is a work of interactive fiction about a dying man and a desperate final stand. Set in the world of the author’s Fionn series, readers/players get to experience a dark and gritty retelling of authentic Irish mythology in first-person. With a fifty-strong raiding party days away from the tiny village of Ráth Bládhma, we take on the role of Ultán, a grizzled scout who’s handy with an axe and suffering from a fatal case of black flux. In the pick- your-own-path tradition of the Fighting Fantasy gamebooks or Choice of Games stories, the options readers select lead to different outcomes for the protagonist and the village itself and reveal different sections of the narrative. 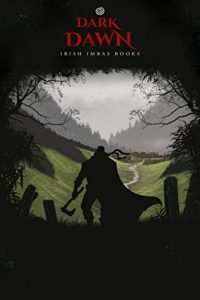 In terms of prose, worldbuilding, and characterization, “Dark Dawn” packs a lot of punch for its relatively short length. As a man pondering his imminent mortality, Ultán is a fascinating POV character with a narrative voice flavored by his grim reflections and a gradual acceptance of the inevitable. Having lost his own wife and son to bandits, he has something of a personal stake and a second chance in the survival of Ráth Bládhma. By contrast, however, the author does an equally good job of recognizing the humanity of every character, even the antagonists, with a powerful economy of words and small moments. In this way, I think O’ Sullivan’s done a good job of translating the mythological to the personal and realistic.

One aspect of “Dark Dawn” I really enjoyed was the way even wrong choices led to unique sections of prose. There are some substantial passages, for example, the player only sees through missing the raiders’ scouts and losing the game. The game is a bit linear  (as far as I could tell after a few playthroughs) with one real ending and one set of choices to get there. However, quality writing and characters go a long way to counteract this, and I still thought it was a very enjoyable way to spend an hour or so.

Compared to similar interactive fiction gamebooks, “Dark Dawn” is significantly more book than game. Eschewing the mechanics, character sheet, and rulesets of Fighting Fantasy or Lone Wolf, the focus is purely on narrative. And although I found the story to be enjoyable on its own, it does function more as a prequel than anything else. A successful playthrough concludes before the actual impending raid on Ráth Bládhma and points readers to the Fionn series if they’re wanting more. While it did feel like something of an appetizer to the main course, it was an exceedingly good appetizer at that. Grimdark Magazine readers keen on Irish myth and/or Iron Age adventure should definitely check out this cool (and free!) little tale at Irishimbasbooks.com and try their own hand at saving Ráth Bládhma from a bloody fate.