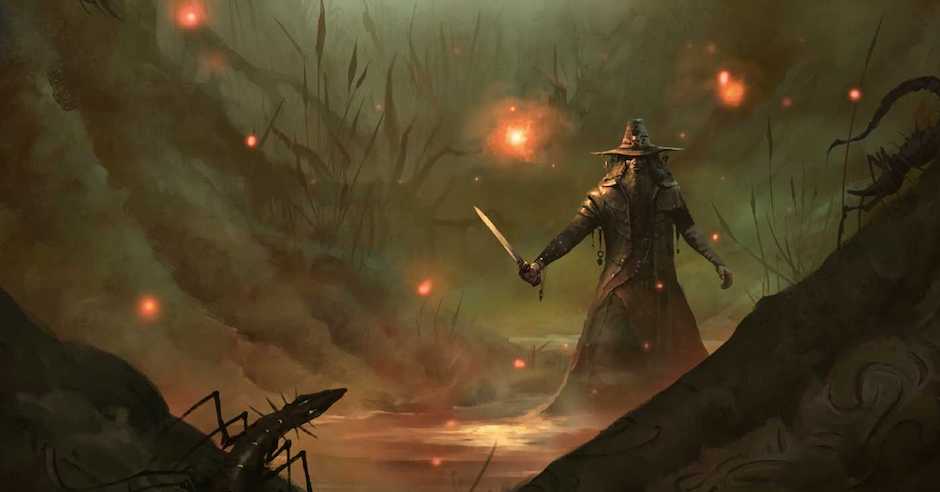 I’ve read a lot of Black Library stuff, but never before in the Warhammer Horror sub-section and only once previously in the Age of Sigmar setting. Dark Harvest is set in the Realm of Ghyran (that’s the realm of life magic to those not well versed in the setting) and sees former Sigmarite warrior-priest Harran Blackwood looking to settle an old debt in the isolated town of Wald.

(Disclaimer: I’m reviewing the audiobook, so any misspellings of names comes from that, sorry.) 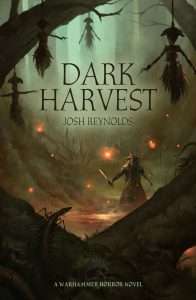 Our protagonist Harran is enigmatic and information about his past, intentions or current beliefs – aside from a realm weary nihilism and willingness to break bones – is dragged out of him most unwillingly. He’s definitely not a ‘good guy’ and that tallies with the generally oppressive setting to make this very much a grim dark story. Dark Harvest boasts a number of secondary characters but most of them feel like plot elements rather than fully fleshed out characters. From the gambler Gint, the Lord Wald and his sheriff, the town headman, all seem like they’re there as foils for Harran or to dish out fetch quests or take beatings.

The exception is Mern, the former colleague who he’s here to find/kill (I’m never quite sure what Harran really intended to do) who barely actually appears but who’s motivations and character are teased out to some depth at second hand, which is a deft touch.

Like information from Blackwood’s taciturn lips, the plot of Dark Harvest is teased out slowly and puts me in mind of the slow build of the Wicker Man or any number of old school Hammer horror movies. Lots of portents and ominous happenings, but we don’t get to the actual meat of things until the final quarter of the story.

There’s also some sense of the classic American Werewolf in London scene where our protagonist walks into the rural pub and the whole place goes quiet. The vibe of “you’re not from round here” is strong.

The atmosphere of this dilapidated swamp and it’s insular locals is well built and you can literally feel the damp and oppressive murk taking the verdant nature of the realm and twisting it to a darker purpose.

Another thing that’s impressive in Dark Harvest is that Reynolds manages to provide an unanticipated antagonist, as my first two guesses were wide of the mark. It’s a brave step in a franchise that all too often goes for the same old bad guys and it’s very well done.

Also, the horror constructions means that this should be accessible to folks who aren’t necessarily well versed in the Age of Sigmar lore as references to specific gods and entities are contextual enough to be picked up on the fly.

My one real criticism is that the conclusion of the story feels a little underwhelming. It’s clearly intended to lead to the further and darker adventures of Harran Blackwood, but it left me wanting something more definite.

As such, I’ll say that Dark Harvest is a very solid story that builds it’s oppressive setting well and has a compelling protagonist. While the conclusion didn’t quite satisfy, I’m interested in the future adventures of Blackwood, so I guess that’s the point, isn’t it?