The concluding volume of The Nevernight Chronicle has cemented the view in my mind that Jay Kristoff deserves to be placed among the great grimdark authors. Darkdawn is a brilliant conclusion to the trilogy, it answers every question, ties off every loose thread, and does so in a witty, violent, and thoroughly engrossing way. Darkdawn is the promised crescendo of Mia’s story and it does not disappoint. 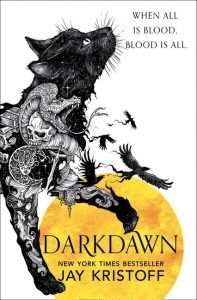 One of my absolute favourite things that I have discovered about Jay Kristoff’s writing through completing The Nevernight Chronicle is how hilariously self-aware he is. The opening page for example has the chronicler apologise for the ‘state’ the reader was left in at the end of Godsgrave and that they ‘seemed quite upset’ (which was true) and later on comments such as ‘it’s actually not a bad read. I mean if you don’t mind footnotes and a fuckload of cursing’ or ‘you can tell it was written by a man’ because of the way the sex scenes are described, provide not only some much needed light heartedness in the novel but also shows that Kristoff is clearly aware of some of the biggest criticisms of the trilogy and uses it to his advantage. As someone who quite liked the footnotes and does not mind the swearing, I found it hilarious.

The reader has known from the outset of the first novel that Mia will die. So it is not a spoiler to say that it happens in Darkdawn and that the whole novel builds up to the final promised battle between Mia and her nemesis, Consul Julius Scaeva. But even having known since the start of the first novel such a huge part of how it ends, the denouement of Darkdawn was still fantastic. There were twists, turns and heart breaking surprises even up to the final pages.

Just because the ending was truly an epic conclusion does not mean that Darkdawn was a slow burn novel in any way. The story begins straight after the concluding events of Godsgrave with Mia in the bowels of the gladiator arena and sprints straight in to the action. Darkdawn has a much faster pace than its predecessors and maintains a sense of earnestness and import until the grand finale. Reading it felt in some ways like a mirror of the events of the novel, with no safe place to stop, a huge sense of urgency and near constant tension. Firstly, I think this relentless speed comes because Darkdawn mostly follows the present timeline of Mia’s life and having already provided us with all the supporting information Kristoff has less need to back fill our knowledge gaps to progress the narrative. The reduced use of footnotes also helps speed up the reader and move them through the narrative quicker than in the earlier novels. Even the physical layout of the book encourages them to just keep on going. In Nevernight and Godsgrave when a chapter ended the remainder of the page was left blank so the end of chapters were good pausing points. Whereas in Darkdawn the next chapter begins straight away, with only the chapter subtitle stopping you from just reading on that little bit. Almost every time that meant I continued to read even though I really wanted to savour every sentence the novel had to offer.

I have said in my earlier review of Nevernight that I liked that it read more like an entertaining biography than a fictional novel. This has grown in Darkdawn through the revelation that the chronicle is a metafiction. The chronicler’s identity is discovered early on in Darkdawn and how this is done and the revelation that series is actually a novel within a novel was so utterly surprising that I gave up trying to predict how the journey was going to unfurl and decided to just enjoy the ride.

And what a ride gentlefriends. The more traditional structure of Darkdawn made it seem grand and all-encompassing in a way that the first two novel were not. It felt like a true epic, with Mia and her allies journeying across different places in Itreya, gathering allies, fending off Illuminati, winning some fights, losing others. The final battle was as destructive as it has been promised to be from the beginning, and it was an exceptionally written clash of titans. Even having anticipated it all the way through the series I was utterly invested in how that final battle played out.

Darkdawn was a bittersweet read; I loved almost every word of it. At times it broke my heart, I did not want it to end, but I wanted there to be a happy ending (which as we know is rare in grimdark). I desperately wanted to keep some characters safe, I was glad to see the gruesome demise of others. It is a hugely satisfying end to the trilogy and although Mia’s story is complete, I still want more from this world and if Jay Kristoff ever does return to the Red Church I will gladly devour that novel too.