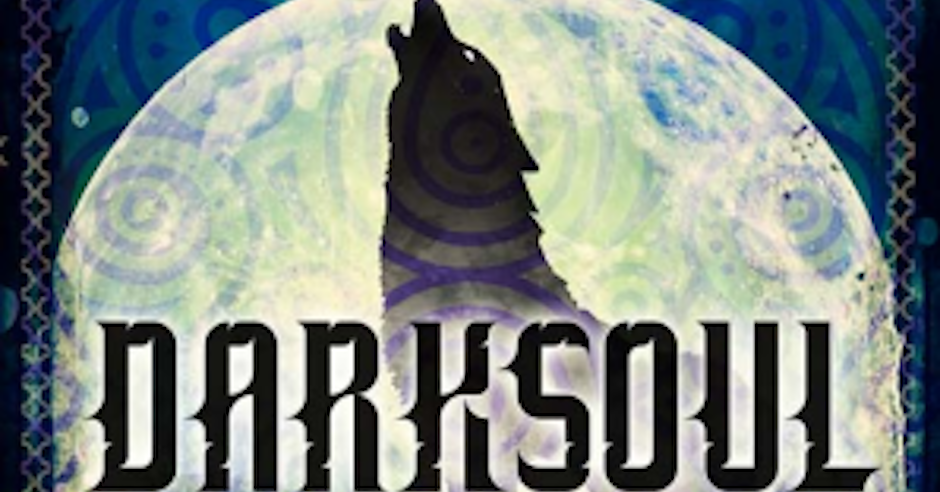 Darksoul is Anna Stephens’s taut follow-up to Godblind and the second volume in the Godblind Trilogy. With a desperate siege and angry gods, this installment shrinks the geography and increases the tension. The characters are really put through the ringer, and not all of them make it out alive. 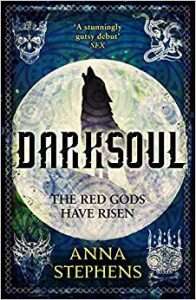 The ruthless Mireces have joined forces with Prince Rivil and the newly converted East Rank of Rilpor’s army to lay siege to the city of Rilporin. King Rastoth is slowly succumbing to the mortal wound inflicted by his treacherous son. The Palace Guard is reinforced by part of the South Rank, and the remnants of the West Rank are on their way, but they are far outnumbered by the besieging forces. Commander Durdil Korridam must fight a defensive battle on the walls and a political battle in the council chamber to keep the city from falling.

This novel focuses on the siege of Rilporin. The tone is bleaker than in the previous book. The Mireces and their allies have the initiative, and they intend to make Rilpor into a playground for their cruel Red Gods. Any hints of bucolic life in the country are gone.

Although the book still has its enormous cast of point-of-view characters, the focus changes a little from the previous book. Rillirin, the escaped slave of the Mireces, does not get as much attention. She has some tense scenes but mostly stays away from the main action. Rillirin fans should not worry; she still has an important role to play.

Crys Tailorson continues his arc of self-discovery. Crys has many ups and downs in this volume, and the nature of his “splitsoul” is revealed in epic fashion. He has grown much from the carousing scoundrel we first met in a tavern at the beginning of Godblind, now embracing and rising to the responsibilities of command and even settling into a bit of domesticity. But he still has many trials—both physical and emotional—to go through.

Dom Templeson, the calestar of the Watchers, has gone through the most change. At the beginning of the novel we find that he has fully embraced the Dark Path and is driven mad by his almost constant communion with the Dark Lady. He is driven to run to the siege on foot with little food or sleep for weeks. Consequently, he has become an emaciated Gollum-like figure. The Mireces treat him both with disgust at his pathetic appearance and awe at his chosen place with the Dark Lady. For all his wretched glory, Dom still plays a pivotal role in the story. He is both the Godblind for which the previous book and the trilogy are named, and the Darksoul for which this book is named. It is likely that he has a further crucial role to play in this series.

Both Durdil Korridam and Mace Korridam gain more prominence in this volume. As commanders in the siege, they have great importance to the story, and we spend more time with each of them. They are both in the mold of the “honourable commander” archetype and tend to put themselves at risk more than they should. Mace is basically a younger version of his father, and we see him learn and come to grips with the responsibilities of his command much the same way that his father did.

Once again, the fight scenes are outstanding and savage. However, in this volume they ratchet up the narrative tension rather than relieve it. They still have the ferocious and immersive nature that the fights in Godblind had, but we now get a taste of the desperate emotions. Particularly in the large battles of the siege, we feel the defenders’ desperation and weariness. It is constantly suggested that the defenders are making superhuman efforts in a doomed situation.

In Darksoul Stephens continues the use of third-person limited point-of-view with an abundance of short chapters and a multitude of POV characters. This structure controls not only the pacing, but also the tension levels. This was probably the case in Godblind, as well, but I didn’t realize it because I was so focused on the fight scenes. In Darksoul the viewpoint changes before the emotion spills over into melodrama. We get a taste of the desperation of the defenders before switching to political machinations within the siege camp. We see a little of Crys’s intense romance juxtaposed with Dom’s intense madness. We stay with each character long enough to feel the intensity of their thoughts and feelings, but not long enough to become wearisome for the reader.

Darksoul has some big set-piece scenes sprinkled throughout that also aid the pacing. Some of the fights have large implications for the overall story of the series, and we get to see those regularly throughout the book. We also see more of the divinities: the Red Gods and the Gods of Light both make appearances in this volume in ways both spectacular and subtle. Although spectacular, the divine intervention is never a deus ex machina. I was quite satisfied by the level of plot action, reveals, and character growth.

Once again there are some savage scenes in this volume. I didn’t have quite the visceral reaction to those scenes in Darksoul as I did in Godblind. This may be because I was expecting them this time. It is probably also because they are set against the backdrop of a siege where brutal slaughter is the norm. However, we do get to see how far Dom has fallen into depravity in several scenes; and Gosfath, the God of Blood, makes even that look tame.

I was expecting some subversion of the “Good versus Evil” trope to show up in this book, but that didn’t happen. The good guys are still the honourable ones, fighting to defend the defenseless, and sacrificing themselves for their compatriots. The bad guys are still bloodthirsty, reveling in pain and death. We do get POVs from some bad guys, but there are no doubts about which is the right side to root for. It’s still possible that another reveal could change things in the third book.

Grimdark fans will like the darker tone of this siege novel. The pacing and regular addition of major events and plot points kept me engaged throughout. Fans will also like the POVs that show the motivations of both protagonists and antagonists. There are believable characters, real consequences, and plenty of action and wonder. Don’t get too attached to any one character—they may not make to the end of the book!

Darksoul is another thrilling entry in the Godblind series. The desperate tone gives way to breathtaking action. With Godblind and Darksoul, Anna Stephens firmly establishes her name in the genre.