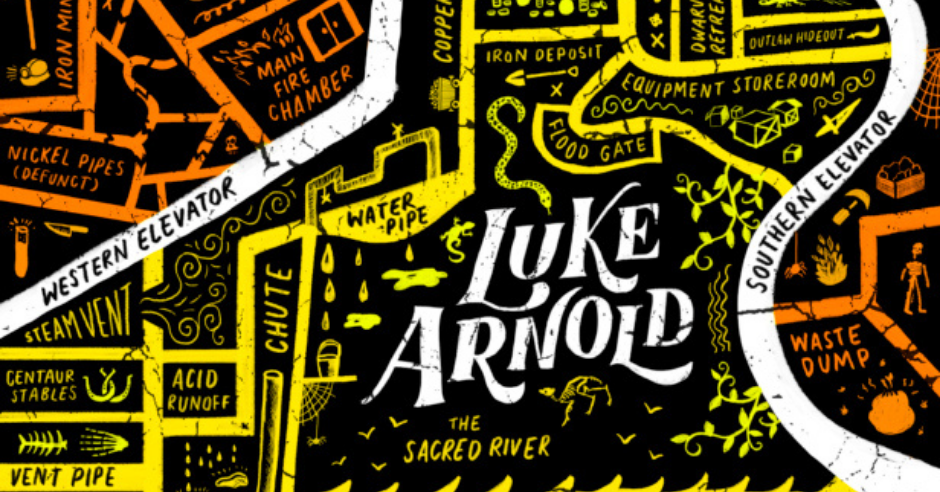 Dead Man in a Ditch, Luke Arnold’s second book in the Fetch Phillips Archive, is a devastating and unforgiving story about redemption and regret that will keep you wanting more. It is a story that demonstrates why a single mistake can haunt you for a lifetime.

“I tried to bite my tongue but after years of exercise it had learned to fight back.” 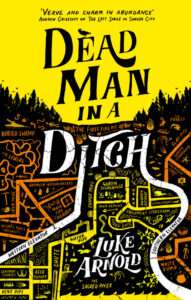 Fetch Phillps, the main protagonist of the story, is a complete contradiction. He is a character that makes you be both repelled by his prickly personality and penchant for self-destruction, and desire to lean in and learn more. In the previous book, The Last Smile in Sunder City, we know a bit of why Fetch, and by extension, the world is the way it is. Eight years ago, Fetch made a mistake, probably the biggest mistake in the history of humans. He betrayed magical creatures and helped humans damn up the magical current that flowed through the world. In one minute, the world went from a vibrant technicolor world full of warlocks, dragons, fairies, and demons to a drab gray where the previously magical creatures now exist perpetually paused. They are neither human nor what they used to be.

Fetch now lives with the acute regret of that moment.

His regret and self-loathing are a constant reminder that he cannot change the past; even with all the shame in the world, some things may be beyond redemption. As a reader, I am sympathetic to his plight, but some mistakes are too big ever to forget. To pass the time, Fetch works as a detective for the “magical” community. And although he will not work with humans, he does enough to survive. The story is structured as a “Sam Spade” type detective story with nods to Dashiell Hammett and Raymond Chandler. You can tell that Arnold has significantly been influenced heavily by the genre. But unlike Sam Spade, I find Fetch to be a very genuine character. His pain and possible redemption feel realistic and authentic.

His pain is real, and he faces the repercussions of it every day. Whether or not Fetch successfully saves his soul is not yet seen, but I feel like the possibility that Fetch might find redemption for himself, however that plays out, brings me back to Arnold’s books. I want Fetch to figure things out and forgive himself however that may look. There might not be any significant saving of the magical races in this series, and Fetch’s cycle of redemption might be a lot quieter and less overt. It might be that he will finally decide that he has done all he could, and that will have to be enough, but I think that is a long way off.

“You still think, after everything that happened, that what you do doesn’t matter? That because you take your orders from someone else, that you’re no longer accountable for your actions? Nothing is just a job, Fetch. Especially now. Not at a time like this.”

The storyline for Dead Man in a Ditch is bleak. A man has been inexplicably murdered, and the only explanation is that magic killed him. But magic is gone, isn’t it? There are moments, particularly one near the end of the story, that were heartbreaking. The raw emotion that Fetch feels is so painful that it was difficult to read. He reaches the bottom. While the storyline starts off following the typical episodic nature of detective stories, pretty quickly, we begin to discern the broader power struggles beyond this case. There are grander ideas involved that will rip Sunder’s very fabric and bring its inhabitants to their knees.

The critical thing to remember about Arnold’s writing is that there is a small, almost intangible glimmer of hope. It flashes in the moments that Fetch has with characters. Whether it is a laugh, quiet companionship, a good meal, or a healthy horse, these moments reveal that not all is lost for Fetch. He is not irredeemable. We have to hold on to these moments for Fetch because he forgets. He wallows in the muck and mire of his past choices.

“We all burn ourselves, Fetch. It’s the best way to learn from our mistakes. It’s only when some part of you freezes that you cut the fucker off.”

My quibble with this book specifically relied solely on pacing. There was a lot of action and a lot of introspection, but it felt uneven at times. We would be catapulted in exciting moments, especially one very visceral one about unicorns, only to be halted in the next scenes with stillness and lack of action. But it was a tiny thing, and on the whole, Arnold kept you moving and interested one scene to the next.

Dead Man in a Ditch is a good book and an even better series. It isn’t a typical urban fantasy story where magical creatures are supernatural power beyond human understanding. They are broken withered things; humans broke them eight years ago. Fetch broke them. Instead of approaching the story like many urban fantasy writers do where humans are weak in the face of magical power, here, humans are almost villainous. Dead Man in a Ditch expands on the ideas of redemption and power that we got tastes of in the first book, The Last Smile in Sunder City. But goes many leagues further and brings Fetch to his knees. Only when Fetch hits absolute rock bottom can he look up and see the proverbial light.

“You’ve touched the pistol. Nobody needs to show you how to hold it or the way to make it work. It is the most elegantly designed piece of evil I have ever seen. From the moment you pick it up, you want to use it, don’t you think? It’s almost impossible not to.”

I believe that if you loved The Last Smile in Sunder City, you would be very moved by Dead Man in a Ditch. It is a worthy second installment in this series, and I can’t wait to read the next one.

Read Dead Man in a Ditch by Luke Arnold