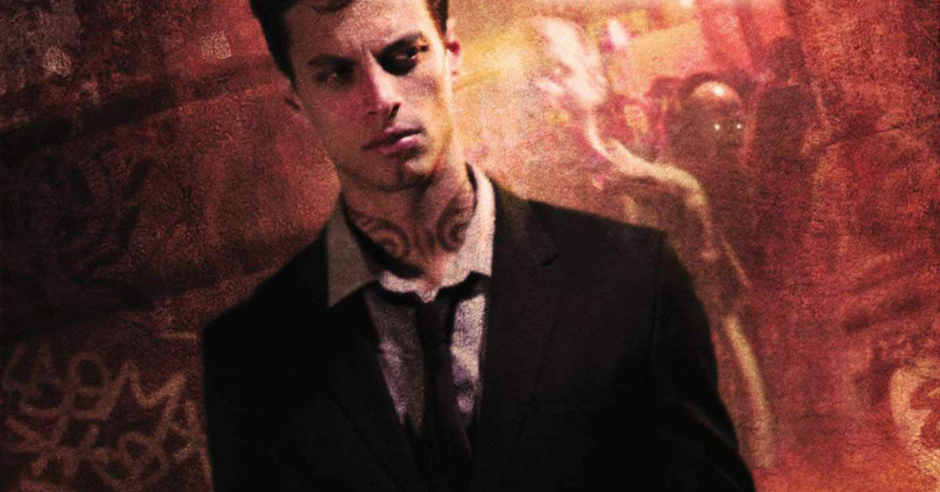 In Dead Things by Stephen Blackmoore, the lead protagonist Eric is truly a dark son-of-a-bitch. 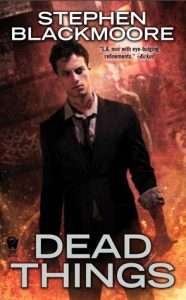 If Dead Things is anything to go on, I would have to guess the whole series has a noir urban fantasy vibe reminiscent of Felix Castor or John Constantine. There will be obvious comparisons to Harry Dresden from The Dresden Files, but Eric is cold and ruthless, whereas Dresden is snarky. Either way, Dead Things was a gritty urban fantasy done well.

We start the story by being introduced to Eric after he is called home. His sister has been murdered, and Eric is home visiting old haunts. He is also looking for information, and the only way he can get it is by talking to the dead. Through ritual and blood, Eric speaks to the deceased. They are a swarming mass of life-sucking souls held at bay by Eric’s will and attitude alone. This story does not make the paranormal world look charming. There are no hugable and misunderstood souls here. Dead Things’ creatures want to tear you limb from limb and feast on the bloody bits that are left.

With the bits and pieces of information that Eric gets from the ghosts and the old friends and new enemies he meets up with along the way, Eric begins to pick apart why his sister got killed.

There is a ton of positives about this story. Firstly, Eric doesn’t have a swagger. Don’t get me wrong, I enjoy a good quip and a well-placed swagger, but it has gotten formulaic across urban fantasy. It seems like every new series I read is a clone of Harry Dresden. Not every series needs to be cheeky. Secondly, how necromancy is described hits home how dangerous and otherworldly it can be. This kind of power shouldn’t be taken lightly and isn’t in Dead Things. And while this is a fantasy novel, it does add a gritty realness to the story. I think fans who like their fantasy with a side of grimdark will appreciate this series.

Eric is a violent person; he has no qualms about throwing down with humans or with the undead. There is a lot of violence and action scenes in the story, and they are done well. Blackmoore writes with a gritty scalpel, and he does not mince words.

Dead Things is a solid start to what looks like a dark and entertaining series for my grimdark-loving heart. I plowed through this book and can’t wait to get to the second book in the series, Broken Souls.