Deadlands: The Weird West is a roleplaying game that ranks up there with Vampire: The Masquerade and Call of Cthulhu as my all-time favorites. Coincidentally, those are some of the darkest and most grimdark of games. Deadlands could be played as gonzo and bizarre but also horrifying or mysterious. It managed to survive for 25 years in print in times both feast or famine in the RPG industry and the newest edition was something that I was eager to plow into. Much to my surprise, the game line and setting have undergone massive changes since the last time I have played it. Some of them controversial and others unquestionably for the better. 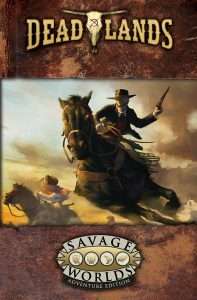 The premise is that the Civil War lasted far longer due to the secret manipulations of supernatural forces that resulted in a zombie plague at Gettysburg among other events. The Wild West has now been afflicted with hordes of monsters and the player characters are among the only cowpokes capable of stopping them as well as the Servitors of the Four Horsemen-like Reckoners. The game incorporates elements of steampunk, supernatural horror, and all variations of Wild West storytelling from John Ford to Spaghetti Western.

Deadlands moved to the Savage Worlds system with their Reloaded edition. This was a controversial move, changing the entire game system of an already popular game, but has worked out well in keeping the Deadlands brand alive. After a highly successful Kickstarter, the Deadlands: The Weird West (Savage Worlds Adventure Edition) was released with a dramatically different setting as well as an updated set of rules.

The biggest change of the setting is that the socio-political structure of the campaign world is completely upended. In the original and Reloaded versions of Deadlands, the Confederacy effectively won the Civil War and entered into a Cold War with the Union. This proved controversial with fans since, zombie uprising or not, the Confederacy winning the war was incredibly unlikely when faced with the industrialized North. It also won by liberating slaves and ending the practice of slavery that the CSA was founded to preserve. As I stated elsewhere in history classes I’ve taught, “The states rights the CSA was founded to preserve were slavery and its practices. It’s in their declaration of independence.” 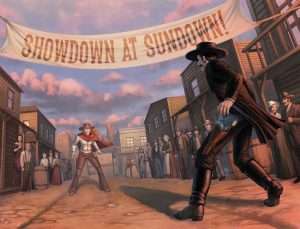 Personally, I think this is a wise decision as immersion in an alternate history game depends on the plausibility of the events involved. I can believe in armies of zombies and monster hunting cowboys but I can’t believe that Jefferson Davis would ever end slavery save at the end of a surrender agreement. It also preserves the motivations of numerous historical figures. Jesse James is a bank robber and unreconstructed Confederate because the CSA lost. Plenty of the migration to the Wild West is also driven by blacks fleeing former slave states to new territories.

The Adventure Edition doesn’t dwell much on the Civil War aspect but actually has a large amount of detail regarding the metaplot of previous editions, particularly the Fall of the Servitors. Honestly, I feel like this is a bit indulgent and would have preferred more information on the politics of the present day. There is, however, lots of information on locations throughout the setting so that Storytellers will not be starved for campaign information. The