Death of Kings, the continuation of Uhtred of Bebbanburg’s tale is another roaring and shield-wall frenzied addition to The Saxon Chronicles. Writing that is as sharp as Wasp-Sting, dialogue that makes even the sternest of nun’s laugh, Uhtred’s band will leave you itching to read more.

“There are seasons of our lives when nothing seems to be happening, when no smoke betrays a burned town or homestead and few tears are shed for the newly dead. I have learned not to trust those times, because if the world is at peace then it means someone is planning war.” 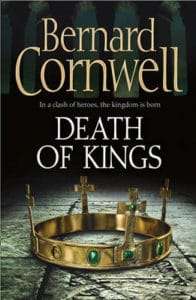 You will I suspect, have heard of Bernard Cornwell and his phenomenal story-telling. He has written about pretty much everything, and all of it that I have read (11 books) and watched (3 Seasons of The Last Kingdom) is incredible. You’ll want to acquaint yourself with Bernard as soon as possible, and be prepared, fore as you begin your journey into Bernard’s world you will become a Saxon warrior in 9th Century Britain, or one of Arthur’s trusted warriors in 5th C Britain, or an archer for England in the 100 Year War.

Bernard is a master of writing. His pacing is perfect, his protagonists are full of charisma and inspiration, and what makes it EVEN cooler is that it is all based on real events. That’s right. This all happened! Well, most of it anyway. (Bernard has traced his lineage back to 9th C Britain and discovered an Uhtred of Bebbanburg in his family tree).

“Men do not relish the shield wall. They do not rush to death’s embrace. You look ahead and see the overlapping shields, the helmets, the glint of axes and spears and swords, and you know you must go into the reach of those blades, into the place of death, and it takes time to summon the courage, to heat the blood, to let the madness overtake caution.”

Now, Uhtred has fought for the Alfred the Great and the Saxon’s for many years, showing loyalty that many did not expect of a Saxon boy raised a Dane man. He has stayed with Alfred, desperate to reap the benefits of his position enough to amass a war band to take back his home Bebbanburg from his uncle. His continues to face this struggle alongside the reality of fighting against the hordes of Danes and other Scandinavian warriors.

Death of Kings has a different format to the previous instalments and is in turn slightly slower, but do not worry, Bernard Cornwell’s staple witty characters have many moments to shine, especially in his famous battles that he writers spectacularly. This book is full of emotional scenes between characters that have been favourites since Book 1, The Last Kingdom (which I shall review in the next month or so). Uhtred’s relationship with Alfred is one that I have appreciated much more the older I get.

Uhtred is a glorious character that has aged very well. He is formidable in battle and quick to anger and one of Bernard’s strongest characters. I love how he is still similar to his younger self, but has changed slightly from experiences and age. I am always on Uhtred’s side. I just wish all of the Saxon’s and Danes were too!

5/5 – Death of Kings is another magnificent instalment. And what’s even better is that Book 6 is only halfway through (so far)! Saxon’s vs Danes, Uhtred stuck in the middle, death is all around, everyone wants a piece of Britain. Storytelling at its best.