It sounds exciting right, living amongst the wilds of nature while being tethered to the city’s ease and convenience. You get the verdant beauty without all the needs of living in a forest. Who wouldn’t want that? But what if something huge happens and you are unprepared for it. You are a city person living amongst the beasts. What do you do, how do you survive?

This is what happened to Greenloop community on the skirts of Mt. Ranier when the Bigfoots came to hunt. 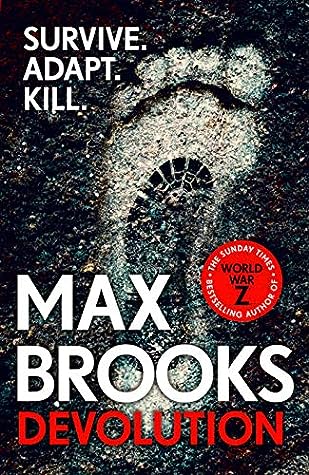 Let me start by saying that Devolution was the wrong book to read right now. Currently, I am neurotic and anxious, trapped in quarantine, much like the rest of the world. Trees surround my home. I can see Mt. Ranier on a clear day from my front yard. It is either the worst or the best time to pick up a book like Devolution; either way, it was effective at scaring the bejeezus out of me. This story is something. Written in what I am sure is to become the “Max Brooks style” of storytelling. It is told through letters and first-person interviews. Instead of linear storytelling Brooks creates the world of the story brick by brick until you are surrounded by his world and can’t get out.

“Many people are horrified when they hear that a chimpanze might eat a human baby, but after all, so far as the chimpanzee is concerned, men are only another kind of primate…”

A group of rich yuppies from the city comes to a premade rural/city community named Greenloop. The food and necessities are shipped in via drone, the homes are smart and powered by solar, people telecommute for work, and every need has been thought of by the architect. Then with a boom and shaking, the sky fills with ash, and Greenloop is cut off from all human contact. This, on the surface, is bad enough. You take characters that do not have a strong bone in their bodies and throw them into a life and death situation and see what happens. Now add in a mysteriously large footprint. Animal bones are surrounding the complex that has been chewed on and licked clean. A strong smell of gamey rot that permeates the air, and instead of just survival, you have so much more to worry about. In the vein of classic fear of invisible monsters, these people are stalked and toyed with.

The lead character is a neurotic woman named Kate. I dislike Kate. I think everyone who reads this book will hate Kate at first. She is an insufferable know-it-all that would be the first to complain to a manager if her chardonnay was the wrong temperature. But when everything goes pear-shaped, Kate changes. This is the best part of the book. Kates’s character progression is beautiful and believable. She is so much more under the surface; all she needed was flesh-eating primates to bring it out. You will love her, you will cheer her, and you will want her to win.

The one complaint I have about the story is that it is a slow burn. SLLLOOOOOWWW. I was waiting for something to happen in the first 60 % of the story, and nothing did. It wasn’t enjoyable until you see why Brooks wrote it that way in the last 40% of the story. It all comes together. Every little bit of info or aside he shoved into the beginning was the building blocks for the last gory and exciting forty percent of the novel. Then all you have is an appreciation for Brooks’s storytelling abilities. Because man, there is craziness, explosions, fights, terror, excitement… so much.

Devolution isn’t World War Z; it is an entirely new thing. The scale is smaller, but the action and characterizations aren’t. It is a big story told on the microscale of a small community. It was so much fun, and you should read it.