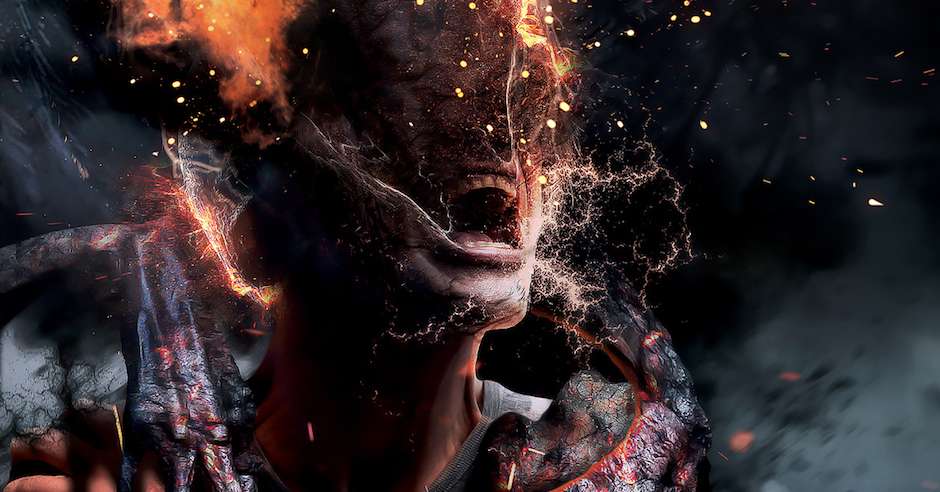 Suppose you have darkness/shadows (depending on what you call it) living inside of you. Suppose you can release it time to time in one way or another. How would you use it? And if you only had a limited time left before the darkness devours you? In Devouring Dark by Alan Baxter, Matt decides to use his power to atone for his sin. After leaving behind Scotland he finds a job and a flat in London, settles down, makes friends, and lives a normal life. And deals with paedophiles on the side every once in a while, knowing he can’t go on like this forever. 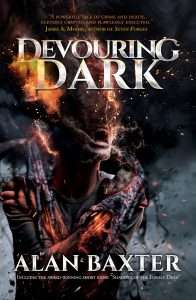 His last hit didn’t go exactly as planned, and that’s when trouble, parading as Vincent Stratton, finds him. Stratton owns a bar in Camden, has connections everywhere, bosses vulnerable teenage boys around to do his bidding while pretending to care about them, and is practically untouchable. He finds Matt’s skill curious and wants to use it no matter the consequences. He is arrogant and a bit narcissistic, sure he can get away with everything. Well, he can, having compromising evidence against almost everyone who counts. Stratton is cunning and makes sure he doesn’t leave any traces behind himself. Knowing that, it really doesn’t take much for him to get a grip on Matt. But Matt is hard to manipulate. Not having any other chance Matt plays the game, but does everything to be the one who sets the rules. Especially after he bumps into Amy, a palliative nurse who has her own agenda regarding death. She and Matt have to work together if they want to survive another day and get Stratton out of the picture. The odds are against them and time is running out.

Devouring Dark has three main POVs plus one with a side character, all of them written in the 3rd person. We follow Matt, Amy, Vincent Stratton and occasionally Charlie Collins—a detective who has been after Stratton for a while. The plot revolves around the relationships of the characters, but the focus is the cat and mouse play to see who can get the upper hand. London provides the perfect background for this dark and heavy story. Baxter keeps the tension up all the way from the moment the unassuming Matt falls into Vince’s trap. Although Matt and Amy seem like normal people, living their everyday lives, underneath it all they hold this secret and try to use their abilities the best way they can, punishing those who seem to be above the law, justifying their acts. Does this make them bad people? Are they any different than Vince, who uses teenage boys to run errands for him, gives them money, food, a place to stay asking for nothing but loyalty and that they don’t ask questions? Is he a good man despite his business machinations? What makes someone good or bad? This book won’t answer that question for you, but it’s interesting how much you can sympathize with someone who takes the path Matt and Amy choose.

“Matt McLeod knew the old adage, that light is supposed to push away the darkness. But he also knew it wasn’t true. Light sits on top, like a film of oil on water. The dark is still there underneath, deep, permanent, waiting.”

I quite enjoyed this book, despite its flaws. For me, the plot needed a better balance. Charlie’s plotline made things really interesting for about half of the book, but then it was abandoned to focus more on Amy and Matt. Probably a better balance between the plotlines and a slightly different ending would have made this book one of the best urban fantasy books I’ve read. It builds up nicely until about 80%, but then the ending feels a bit rushed and unbelievable, and the revelations aren’t all that surprising. What I liked about this book was how real it felt until then. I mean, I can totally imagine there is a guy like Stratton out there, or Amy and Matt minus their abilities, or detective Collins. Not all of them good, but all of them real, whom I could bump into on the streets.

This book is not action packed, but then this book’s real strength is in the characters, and although there aren’t impressive lengthy fight scenes it doesn’t mean it lacks dead bodies. Or tension. You can’t quite know what happens next, even when you anticipate something to happen. The characters not only have conflicts with each other but also with themselves. They all deal with it differently. The writing captures this pretty well.

“People could achieve so much, but they’re fearful. They let it drag on them and they don’t reach their heights. You make sure you don’t give in to that kind of fucking inertia.”

The quote above is from my favorite character, Terry, Vincent’s dad. He is only a side character, but a significant one. He is an old man, can’t remember what happened 10 minutes ago, but can quote Shakespeare no problem. Weirdly, these lines from Hamlet and Macbeth fit really well into the prose, even though it’s a bit of a cliché to use Shakespeare in a book set in London. I liked his pragmatism and the way he handled his situation with some remaining dignity and sarcasm. I kind of wish I had a grandfather like him.

There is a lot to like about Devouring Dark, especially if you are into grimdark (grey characters, making a decision between bad and worse) and dark fantasy. The