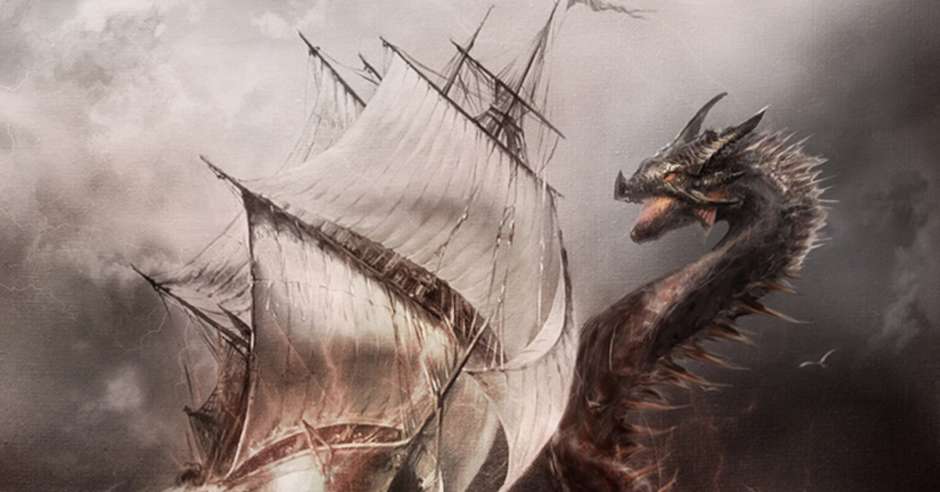 Dragon Hunters is the second book in Marc Turner’s debut fantasy series The Chronicles of the Exile, but features new characters and a different setting within the same world as the first instalment, When the Heavens Fall, a review of which can be found on the GdM blog. In Dragon Hunters, however, Turner changes things up, telling a much more grounded, political story than the grand fate-of-the-world tale told in the first book. It’s a standalone adventure that can be read before or after the first book without any confusion.

Hunting dragons for sport sounds like a good idea, right? The citizens of the isolated Sabian Sea think so, and every year they release a single sea-dragon into their waters to hunt down as part of the festivities of ‘Dragon Day’. Naturally, things go sideways thanks to vying political factions, power hungry water-mages, magical assassins and meddling gods. Stuck in the middle of all this are four complicated, nuanced characters: Senar Sol, a telekinesis-wielding swordsman, stumbles into the fray and, despite the best intentions and stunning competence, flounders as he tries to figure out who the ‘good guys’ are (hint: there aren’t any). Agenta is a callous, determined noblewoman who tries to pursue vengeance against those who stole a shipment of gems and threatened to bankrupt her family. Karmel is an insecure priestess of the Chameleon, a god who grants her limited invisibility, a power she uses to disrupt Dragon Day in the pursuit of her brother’s acceptance. Stuck trying to sort this mess out is the belligerent, surly city watchman Kempis, who is drawn ever-deeper into intrigue despite wanting nothing to do with it. Each of these characters starts off in their own setting and in seemingly unconnected, personal plots, yet they’re all woven ever tighter together and drawn towards the explosive climax that is becoming Turner’s signature. 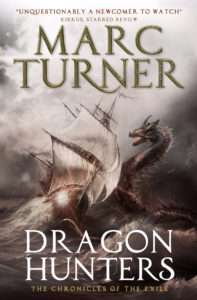 While When the Heavens Fall harkened back to traditional high fantasy with a grimdark twist, Dragon Hunters feels more like the modern grimdark fantasy we’re used to, which is both a good and a bad thing. It’s a refreshing change of pace that displays admirable range on the part of Marc Turner, and the personal, ‘street-level’ stories make his world feel like a real place. There’s less grit and darkness from page to page than in the undead and necromancy-filled When the Heavens Fall, but Dragon Hunters makes up for it with its political and moral complexity. Instead of huge, epic stakes involving the fabric of reality itself and a clear villain like Mayot Mencada, the power-hungry necromancer in When the Heavens Fall, the plot in Dragon Hunters revolves around different factions struggling to gain power in the chaos surrounding Dragon Day. There’s no clear path to a good outcome, and it’s more of a choice between someone terrible and someone slightly less terrible, which makes for compelling grimdark reading. Even the dragons are more of a chaotic by-product of this ongoing power-struggle than an antagonistic force. As should always be the case in grimdark, the real monsters are people. However, there was a certain charm to the marriage of high fantasy and grimdark that was achieved in When the Heavens Fall. The epic, magically saturated struggle between gods and monsters gave that book a sense of wonder that Dragon Hunters doesn’t capture in the same way. That’s not necessarily a negative thing, and Dragon Hunters succeeds in being more than just a sequel stuck in the shadow of its predecessor and is a unique experience in its own right, a more mature story that’s closer to contemporary grimdark than high fantasy.

Similarly, Dragon Hunters shows Turner’s development in characterisation since his debut. I found myself reading less to discover the outcome of the large-scale power struggle and more to reach the resolution of the individual tales, although the wider plot is still interesting. I’m the sort of reader who usually falls in love with the first character I’m exposed to in a book or series and resents point of view changes, but I found myself genuinely interested in all four of the characters. Not once was I irritated by the at times very frequent point of view changes, and I consider this to be quite an accomplishment. Each of the characters has a unique voice and provides a distinct, sometimes wildly conflicting view of events, resulting in compellingly conflicted loyalties about whom to side with as a reader.

While they’re each vastly different, none of the characters are heroic, barring Senar Sol. At first glance he appears to be the classic fantasy hero that grimdark has disposed of, yet his presence in Dragon Hunters never feels odd. He’s an interesting exploration of what a ‘hero’ might do when dumped into the middle of a morally complex plot, and despite being arguably the most c