Dredd is a 2012 sci-fi action film written by Alex Garland (The Beach, 28 Days Later, Ex Machina, Annihilation) and stars the always amazing Karl Urban (Lord of the Rings, The Boys, Thor: Ragnarök) as Judge Dredd. It is based on the comic from 2000 AD created by John Wagner and Carlos Ezquerra and is the first time the character of Judge Dredd has appeared on screen since Sylvester Stallone’s portrayal in 1995. 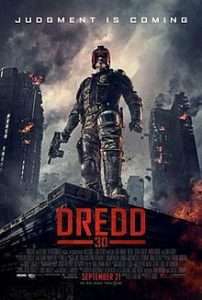 Dredd is a fine example of what happens when a comic book character is treated with respect and genuine care. In the dystopic wasteland of the Cursed Earth there lies a place known as Mega-City One. This violent city packed to the brim with too many inhabitants is rife with crime and it is up to the Judges to sort things out. Given an 18 or ‘R’ rating allows Dredd to bring the world of Mega-City One to life without holding back on the violence and grimness of the world that makes the comics so appealing to its core audience. The escalating madness of the Cursed Earth setting leads to the rise of more violent tactics from the judges and Dredd himself is a character not known for his mercy. He judges criminals to the letter of the law and dishes out the harsh justice expected by his bosses. Dredd takes an unusual but inspiring decision to place the entire story around one day on the job as Judge Dredd is tasked with taking on a rookie recruit with psychic powers – Cassandra Anderson – who marginally failed the aptitude test to become a Judge.

The unique premise of Dredd allows for a tight story full of action that feels ripped straight from the pages of 2000 AD. Dredd and Anderson investigate the deaths of criminals skinned alive by a local drug lord called ‘Ma-Ma’ (played by the sadistic and enthralling Lena Headey in the middle of her incredible run as Queen Cersei from Game of Thrones). Dredd and Anderson become locked in a multi-storey tower and must fight their way up the increasingly hostile setting with the residents either locking themselves away or taking up their own weapons and attempting to kill the Judge and his rookie ally under the orders of Ma-Ma. Dredd dishes out justice in the only way he knows how – using a variety of brutal death shots from his Lawgiver gun.  There is no holding back with the blood and gore and it suits the material perfectly, creating a claustrophobic and tense setting as the two heroes fight to survive against the mounting odds.

The scenes in Dredd with Slo-mo, a new drug on the streets that gives the perception of time slowing down for the user, are beautifully shot and the interesting narcotic allows for some uniquely crafted action shots and gunfights to play out in the gritty, harsh environment of Mega-City One. Dredd himself marches through the chaos at his own pace, following the law and reluctantly dragging Anderson along for the ride. Dredd is an unusual character in that his development is unlike so many characters in other stories. He is a grim, dark enforcer of the law who does things as he believes they should be done. It is this stubborn attitude that Karl Urban plays to perfection and it turns even the slightest bending of the rules into a momentous, standout occasion as Dredd slowly begins to warm to his psychic and emotional rookie. Wearing his helmet at all times, Karl Urban makes Dredd feel like a film that is owed a nod of gratitude from the popular The Mandalorian. Body language and the subtlety of line delivery creates an imposing figure to carry the film across its relatively short run time. There is no wasted movement with Dredd and no wasted moments in the whole film.

Dredd is a near perfect sci-fi action film with an honest and brutal portrayal of a dark anti-hero that proves that there is no need to compromise when adapting gritty comics. This is a must-watch for grimdark fans with a love of sci-fi.