See that cute stuffed hedgehog on the cover of Earthlings by Sayaka Murata? That’s Piyyut. He’s best friends with Natsuki, the book’s narrator, an 11-year-old girl who is also a self-described magician. As explained by Natsuki:

“I hugged my backpack to me. Inside it was my origami magic wand and my magical transformation mirror. At the very top of the backpack was my best friend, Piyyut, who gave me these magical objects. Piyyut can’t speak human since the evil forces put a spell on him, but he’s looking after me so I won’t get carsick.” 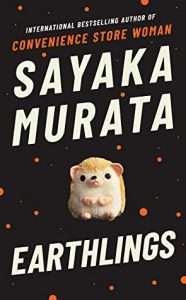 Natsuki goes on to explain that Piyyut isn’t actually a stuffed animal. He is an alien from the Planet Popinpobopia who has given Natsuki a special mission:

“The Magic Police had found out the Earth was facing a crisis and had sent him on a mission to save our planet. Since then I’d been using the powers he’d given me to protect the Earth.”

This is all very cute for a young child, right? It’s not so cute when Natsuki grows up and still believes even more firmly in these childhood fantasies.

Earthlings starts off with a lighthearted style and then descends very quickly into darkness. Some of the trigger warnings include child abuse, incest, murder, and cannibalism. It gets very dark, very fast.

Adult Natsuki has brought two other characters into her delusions: her cousin and her asexual husband. They are convinced that they are all aliens and are determined to be true to their Popinpobopian roots and reject human society, which they see as a conformist Baby Factory. Murata handles the themes of asexuality and anticonformity brilliantly in Earthlings, as she has done previously in her well-known novel, Convenience Store Woman.

Earthlings is very Japanese in its dark and quirky sense of humor and its combination of the kawaii (cute) and the obscene. I found Earthlings to be a unique and highly original read. The closest book I can compare this to is Kafka on the Shore by Haruki Murakami. But even that comparison is a stretch.

Sayaka Murata’s writing is perfect throughout Earthlings. Her writing style is a joy, even while the plot sinks deeper into insanity and obscenity.

Strangely enough, this is my fifth book this year with “surprise” cannibalism. Is this a new trend in publishing? At least Murata makes it sound more appealing than other authors:

Obviously, this book is not for everyone. But if you love quirky Japanese novels with a twisted and macabre sense of humor—coupled with deep insights about the conformist nature of human society—then you’ll probably appreciate Earthlings as much as I did.