A dystopian reimagining of a Europe falling apart, Echo Cycle is a novel in a class of its own. Patrick Edwards draws a vivid image of what could happen to a future after Brexit, the separation of the United Kingdom from the rest of Europe after the crumbling of the European Union. The reader is thrust into the story with a prologue, narrating a school trip to Rome before the borders are fully sealed. Winston Monk, unhappy and bullied, finds out his dreams have been shattered, and runs away, only to find himself in ancient instead of modern Rome. 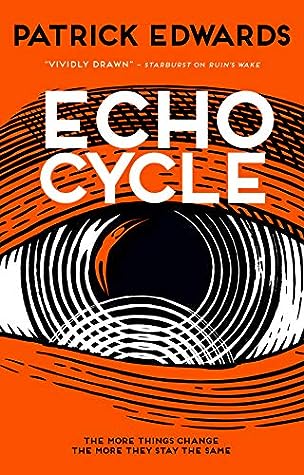 From that point forward, the narrative springs back and forth between 68 CE and 2070, between the Roman Empire and a new Europe showing eerie similarities to that Empire. Just as the title suggests, Echo Cycle twists around the life and experiences of Winston Monk, both in past and present. Crucially, he is a gay man, and his complicated relationship with his lover, the former slave Sporus, forms the centre of these cycles. While Monk’s life in the past is not easy, his return to the narrative present is harder still. He arrives at a time of diplomatic tension, at the same time as a British mission to reestablish contact. He encounters his school friend, Lindon Banks, now envoy to the mission, and together they inadvertently spark a tinderbox millennia in the making…

One of the best books I’ve read this year, Echo Cycle features a clear and compelling writing style, distinct voices fitting the different points of view. At the start of the book, the switch between points of view did happen rather quickly and without much signposting, but the reader is soon able to find their bearings and get lost in the story. The characters are expertly crafted, nuanced and deliciously morally corrupt. The reader has reason to feel with most of them – Nero is and forever will be a bastard – and the villain figure itself is fighting a greater evil. It is great reading material and these characterisations make it all the more harrowing.

Another great strength of this book is its basis in meticulous research. The elements taken from history are well-embedded and ring true, with ancient Rome being evoked through details interspersed in the narrative. Many novels throw historical elements in the reader’s face, but Patrick Edwards manages to weave them into the story as needed rather than window dressing. The world-building for the narrative present is just as excellent. The Latin-speaking European Confederacy is truly scary, and I personally hope that Europe and Britain get their shit together in time to prevent such fracturing from happening.

If you are looking for a thrilling read, evoking harrowing feelings and surprising you with a not-so-wholesome gay relationship (Well done,
Titan, just letting it stand and not mentioning it in any marketing material, this level of acceptance and matter of course is what we
need!), check out Echo Cycle by Patrick Edwards. A wholehearted five of five stars from me! Many thanks to Sarah Mather and Titan Books for providing me with a free review copy in exchange for this honest review.