I know Adrian Tchaikovsky best from works like Children of Time, Children of Ruin and Dogs of War where he uses other creatures, often affected by humanity’s meddling to talk about very relatable human issues, often dealing with the issue of communicating across species boundaries. Elder Race deals with similar core themes, but all of the protagonists are human. Sort of. 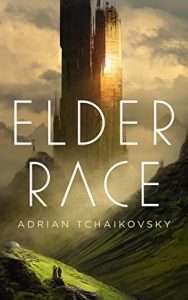 Lynesse Fourth Daughter is an impetuous spare heir in a devolved human society that is at a roughly high medieval state of development (or rather, regression) who seeks the assistance of Nyrgoth, the Elder sorcerer (Elder Race, get it?) to aid against a demon that is afflicting nearby lands. The problem is that Nyrgoth isn’t really a sorcerer but a low level anthropologist who’s notionally supposed to be tracking the development of a colony on behalf of the successors to the more developed human civilisation that originally set them there.

Yes, this is very much nailing the ‘any sufficiently advanced technology is indistinguishable from magic’ trope right on the head, but it does it very well.

Things are complicated by the facts of exactly why Nyrgoth is alone in his tower and has a reputation for coming to these people’s aid in former generations and the story really turns on the difficult relationship between Lynesse and Nyrgoth and their vastly different outlooks on the world.

Elder Race is not a long book, definitely in novella territory but it packs a lot of big ideas and sharp characterisation into the low word count. Tchaikovsky uses the contrast between the core characters as a way to show how people can be very different but also ultimately very much alike.

You have Lynesse being impetuous and determined while Nyr is restrained, overly cerebral and battles depression. Lynesse sees Nyr’s capabilities as magical while he’s all too aware of his limitations and the science at play. At the same time, for wildly different reasons both fear that they are failures and want to prove themselves, to find connection to a kindred spirit or find meaning in their lives.

The difficulties of communication are fun as well, as Nyr’s imperfect translations of Lynesse’s lingual drift leads to him trying to explain science to her but the meanings sound like magical terms, so he ends up saying “I’m not a sorcerer, I’m a magician” and similar to great mutual frustration.

Throw in the way that Nyr often misreads things like how clothing styles are supposed to work or the nuances of local power structures or manners and theres a neat comment on how being a more advanced, supposedly Elder Race and having a near omnipotent viewpoint isn’t as great when you lack context.

Ultimately, the demonic antagonist ends up being almost beyond Nyrgoth’s science anyway, which implies that there’s more going on in this universe than he’d previously been aware of and maybe they have made contact with a genuinely Elder Race and not just a coloniser with some cool toys. The shared existential dread of a genuine Outside Context Moment is a nice subversion of the tone of the story up to that point.

I also detected a fun pun where Lynesse refers to the adversary as a demon, yet how it works seems to be analogous to what a daemon in computer terminology does, except operating on a biological level.

All in all Elder Race is a really fun novella, displaying Tchaikovsky’s trademark sharp prose and big ideas conveyed in interesting ways. It feels like a nice thought experiment that worked out into a compelling story and I’d recommend this to existing Tchaikovsky fans, plus anyone who likes Iain M. Banks, Ann Leckie or Gareth L. Powell.