Engines of Empire is the first in the new fantasy trilogy The Age of Uprising by R. S. Ford. Readers may be familiar with Ford from his earlier fantasy trilogies Steelhaven and War of the Archons or have come across him as historical fiction writer Richard Cullen. 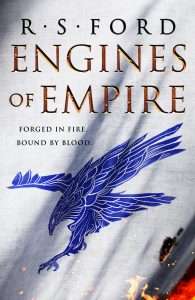 This novel is a fantastic traditional epic fantasy and I think the trilogy could become one of the classics of our genre. The novel is incomparable (although I shall try and do it justice) to any I have come across before, but this series would be perfect for fans of Brent Weeks, George R R Martin or David Gemmell. I do not make the comparison to Gemmell lightly and for me there can be no higher compliment as I credit Gemmell with being my gateway into adult fantasy fiction. The fact that I hold Ford’s Engines of Empire close to that hopefully shows how much I have enjoyed it.

Engines of Empire is set in the vast nation of Torwyn, where Ford has created a rich and believable world that never once seems overwhelming or too complex. Torwyn is an industrialised nation, powered by the magical resource pyrestone and the industry of Torwyn is overseen by different guilds. The guild family with the most influence, and a tenuous hold on power, are the Hawkspurs. The key members of the Hawkspur family provide the focus of the multiple points of view in Engines of Empire with the heading of each chapter indicating the current perspective.

First, there is matriarch Rosomon. Rosomon Hawkspur is a widow with three adult children and has manged to maintain her Guild control for decades. In an effort to continue Hawkspur dominance she has raised her children to be experts in the areas that would be of the most importance to Torwyn: military command, controlling the pyrestone supplies, and creating the machines they control. Her eldest son Conall, is the military mind based at a desolate frontier settlement, where he has to prove he is more than a bought commission in a fancy uniform and the first murmurs of a revolution against the Guilds is a threat he never imagined. Tyreta is the only Hawkspur daughter and able to wield a magical connection to pyrestone. She would be an ideal heir to lead their Guild, if she was not the completely wrong temperament. Tyreta is sent to the pyrestone mines to oversee supply of this most precious commodity and learns more than she ever wanted to about the darker sides of industry. Finally there is the youngest son, Fulren. As a talented artificer Fulren is an inventor of machines powered by pyrestone and would be most happy left alone to tinker in his workshop. But he finds himself thrust into a less than friendly foreign country after he is framed for a crime that could ignite a war. A war which Torwyn may struggle to win.

The Hawkspur family provide a net that Ford is able to cast over his entire world and Engines of Empire moves between the different characters and their settings effortlessly. Multiple perspectives can sometimes feel clunky but this is not the case here. Each point of view is believable and engaging, and for a narrative that moves between people and place it never loses the flow of each individual storyline or how they weave in to the wider plot. A large part of Engines of Empire is the “coming of age” arcs of the younger Hawkspurs, but there are a lot of other fantasy tropes at work without feeling clichéd. Ford has not only given us magical machines, but fantastical beasties, sorcery, huge battles, religious conflict and enough political intrigue to make this a good solid epic fantasy. Engines of Empire is not a fairy tale though, a happy ending is not guaranteed, the characters are imperfect, and although the Hawkspurs are the back bone and heart of the novel I did not always like them. However, as this review is for Grimdark Magazine I must point out that it is not a grimdark, or even a dark fantasy, novel. Many of the things we have come to expect from grimdark are not present here: swearing is mild and infrequent, the protagonists are almost entirely the good guys, sex scenes are implicit, any violence is not gratuitous and although there are dark aspects to the story it never feels hopeless or amoral. What Engines of Empire is, is the best traditional epic fantasy I have read in years.

Engines of Empire is beautifully written, and I knew from the first paragraph of the prologue when Ford wrote ‘fear gnawed at him like a starving hound, cracking his bones and licking at the marrow’ that it would be a great novel. It is vicious and awful and dreadful and terrific in equal parts. It got better with every page and I resented having to stop reading it and do real life things. There is a clear narrative voice for each of the perspectives so it never felt confusing or difficult to follow, even though the world is so large and there are so many characters. The Dramatis Personae at the beginning of the novel was very useful to refer back to early on, but I found I did not need it the more engrossed in the story I became. Torwyn is an authentic and original world and although Ford has used almost universal focuses of family or political power struggles that readers have almost certainly come across before, Engines of Empire genuinely does not read like anything else I have ever read.

This book will stand the test of time and I think will be enjoyed by fantasy readers for years. I will be rereading it just because I can and because I have to wait to get my hands on book two.

I would like to thank Orbit Books for sending me an Advanced Reader Copy of Engines of Empire to be able to review it. You can read an excerpt of chapter one, here.