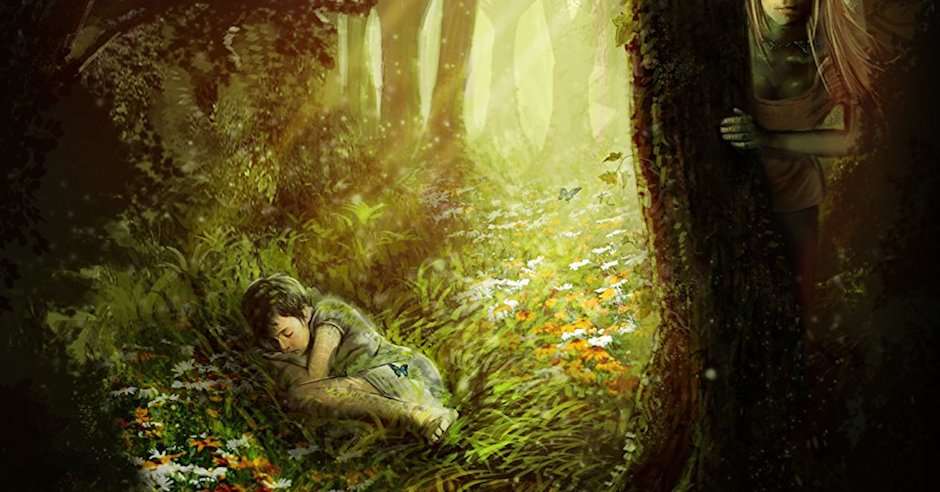 Graham Austin-King puts the bite back into the world of fairy tales with the first of the Riven Wyrde Trilogy: Fae – The Wild Hunt. This story is told from the perspective of three main characters, though the viewpoints of the entire cast works to weave one fundamental tale.

We are first introduced to Miriam and her young son, Devin, who are in an all too familiar situation.  The father and husband drinks too much, is unemployed, and takes it out on his family. After a shocking opening scene – courtesy of a simple ladle – Miriam and Devin head out to find the only family they’ve ever known. Along the way, bandits attack, Miriam is wounded and Devin begins to wonder why his mother is acting so strange: reveling in the moonlight and singing and dancing between the stones of an ancient monolith in the depths of a dark forest. 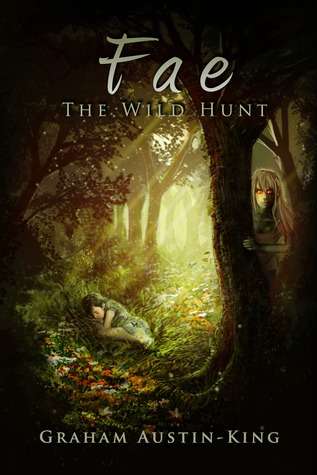 This is when we get the first glimpse of the Fae creatures that Austin-King has so masterfully wrought. Held back from entering the world of man by the Wyrde (a failing druid seal), the Fae escape and pull Miriam into their world, leaving Devin abandoned in the forest. Reminiscent of Tolkien’s ring wraiths in their white, wispy form, Austin-King’s Fae are truly wolves in sheep’s clothing. They whisper half-truths and seem innocent enough, until the flash of human steel, or the burning sting of iron, send them into a man-hunting frenzy. So much for fairy dust.

Devin is then found and adopted by a couple living in the farm town of Widdengate, where myths and legends of the droos (a druid sect) are spun to scare little children. Widdengate is full of hard-working, hard-drinking folk and, amongst other details, Austin-King effectively renders a realistic and plausible setting.  Devin grows, is on the sour end of unrequited love, and occasionally gets pummeled by Artor, a bastard of a teenage character if I ever saw one. In one scene, Devin catches Artor forcing himself on a maiden. Rather than feeling ashamed, or trying to cover up his crime, Artor proclaims that Devin is in the wrong for being perverted enough to watch.

Although this is dark fantasy, Austin-King manages to create a world filled with characters conflicted and confronted with situations that all but the stoutest recluse would sympathize with. This adds a lot of punch when the Wyrde begins to fade and the absolutely sinister Satyrs’ begin oozing out into the world of man. These Satyrs’ are the goat-faced minions of the Fae, and Austin-King ramps up the stakes by adding chapters on their attempts to prod the barrier holding them back. Much like the looming invasion of the White Walkers in Martin’s A Song of Ice and Fire, the Satyrs’ go unnoticed while the people of Widdengate fight over religion and position. Even when a single Satyr seduces Devin’s adopted mother and traumatizes her in her own kitchen, the people of Widdengate refuse to believe in fairy tales.

Austin-King’s prose is detailed and sprawling; jumping from region to region and covering many minor characters. The pacing of the novel may seem slow at first- but this is because Austin-King is thorough in setting up the pieces. Once the board is set and the power of the Wyrde has faded, the action and the connectivity of every plot thread makes the pages fly. Austin-King’s use of the fairy tale within the fairy tale to reveal backstory and history reminds me a lot of Patrick Rothfuss’ style of storytelling in The Name of the Wind. Myth and legend, as told by many of Austin-King’s characters, become the only truth when faced with the absurd.

Meanwhile, Selena, the Duchess of Eastern Anlan, is unhappily married to Duke Freyton. He is absent from his duties as a ruler and husband and, if ever he managed to rise from his eternal drunken stupor, might produce an heir to the throne. While Freyton wastes the kingdom’s riches on alcoholic bliss and large donations to the New Dayers, an intolerant new religion sweeping the land, Selena goes full-on into boss mode and seizes the reigns of leadership.

Though quite intolerable herself, Selena manages to run the kingdom’s affairs through sheer willpower and title alone (think Daenerys Targaryen without the dragons).  The Bjornmen raids on the Farm Lands have become more frequent and Selena sets her mind to thwarting the “wild beasts” as she calls them. Though she is at first an unlikeable character, her progression from dainty trophy wife to military spearhead is fascinating, and one can’t help but root for her to lie, forge and intimidate her way into defending the land in which she finds herself a stranger. There is no sugar in the tea of Eastern Anlan- and, as the story progresses, we find a bittersweet end to Selena’s dilemma.

Last but not least of the three main viewpoint characters is Klӧss, who is conflicted between following in his father’s footsteps as a merchant – in his opinion, an altogether lazy pursuit – and following his uncle Frostbeard’s reavings across the sea. He is, in my opinion, the most morally gray character of the lot, and one who may cause readers to turn their backs on. Slightly younger than most of the reaving Bjornmen, Klӧss affirms his abilities by passing the oarsmen trial and becoming a full-fledged reaver.

This is not to say his journey is void of any complications. He is harassed and sabotaged, beat about by Verig, his trainer, and swept off his feet by a thief with a blade to his throat.  After realizing the Barren Isles can no longer support his people, Klӧss sets out across the Vorstelv, a stretch of sea so cold and merciless that only the islanders can bear to traverse it, in search of new lands to occupy. What better place than the lands surrounding Widdengate? While reaving, Klӧss murders, plunders, and takes on the responsibility of his entire people. While his arc is the meat and potatoes of the darker, grittier side of the entire narrative, it isn’t until all threads come together in the last quarter of the book that the Fae put his actions to shame.

Throughout the three main plot lines, Austin-King introduces Obair, the old druid responsible for keeping the Wyrde closed. But as the full moon grows, the Satyrs’ begin to push the limits of the Wyrde, slaughtering livestock and testing the boundaries of the old druid that holds the key to who they truly are. The Satyrs’ seduce, plot, and play eerie flute music while they leave those in their wake petrified with fear. Amidst Devin’s struggle to hold his new family together, Selena’s fortifications against an ever-encroaching occupation of Bjornmen, and Klӧss’ dreams of finding a new home for his people, the Fae and their minions emerge as an enemy overshadowing all. It’s a hell of a cliffhanger!

Satyrs’ maniacally ride the backs of men like horses and cut through their ranks with weapons unseen before the old droos (pay attention to the wonderful word play throughout) died out.

Out with the old and in with the new is a theme that runs throughout this story, and the transition from one to the other is paved with amber-eyed Fae in feather-light armor, dying lands and newly erected walls to keep the darkness from seeping in. Fae – The Wild Hunt runs at a steady boil that erupts in the final chapters and will keep grimdark fans wanting more of the sinister creatures that come out when the moon is full, and the Wyrde has faded.

Shawn Mansouri is a research technician in the fight against mosquito-borne disease. When he's not wrangling mosquitoes and bedbugs and mice, he reads and writes speculative fiction from a bamboo-encased bungalow riddled with arrows, ninja stars and rejection slips. He's a huge fan of Grimdark Magazine and the Grim Tidings Podcast. "If you can put me in someone else's shoes, and make me see the world in a different light, I'm sold." He lives in sunny—much too sunny—California with the love of his life Cymphonee.