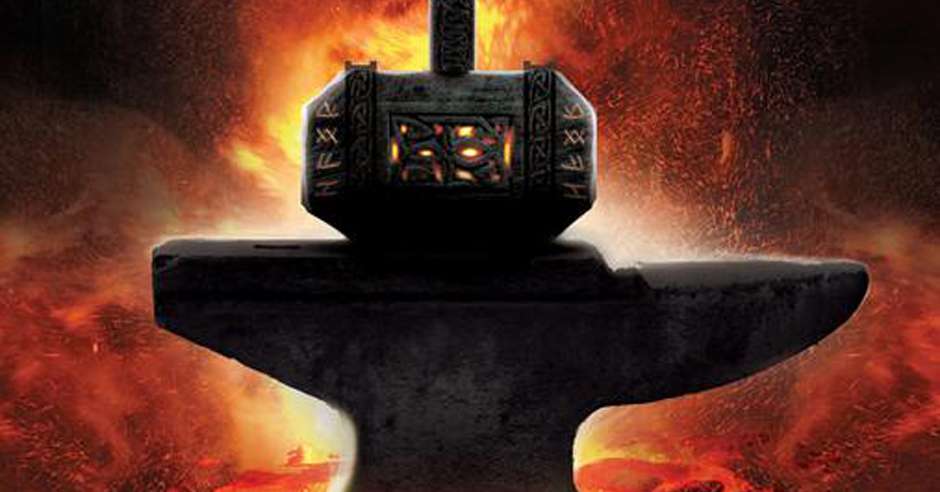 Faithless, from Graham Austin-King (The Riven Wyrde Saga), is an intelligent, complex, exciting, dark, and somewhat transgressive story about a young man’s journey from poor son of a farmer to, well, you’ll have to read it to find out. It is an enjoyable, if not perfect, read that is chock full of clever ideas and resonant themes delivered passionately by its author. The e-tome we received at Grimdark Magazine, weighing in at a hefty 136,000+ words, is labeled as a draft, so I will not be directly quoting from the text in this review. It is the hope of this reviewer that the book that Austin-King ultimately publishes will be significantly shorter. 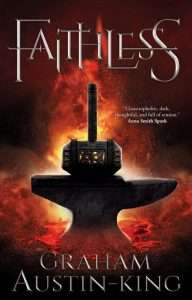 The story follows parallel narratives. First, we are introduced to the boy Wynn via the obligatory scene in which the child of a family too poor to nurture him is sold into a brutal life at a dreadful institution (Blood Song, Red Sister, etc). In this particular case, Wynn is sold into the service of the temple of the Forgefather and relegated to the work in the mines, breaking rocks and mining ore for the temple Forge. Wynn’s narrative takes turns with the narrative of Kharios, a young man, novice of the temple, caught between a rock and a not-so-hard place. (You’ll get the joke when you read it.) These two narratives are both told in very close, limited third-person and converge somewhat late in the novel, but the whole ploy is cleverly planned and deftly handled.

Neither Wynn nor Kharios is an exceptional character and both seem a bit like milquetoasts for most of the story until the final climactic challenge. Similarly both characters are do-gooders, for the most part, though they occasionally regret having to leave friends behind on their way up the temple’s political/religious ladder. Near the end Kharios develops a relationship with Leesha, a girl his own age, and some YA romance is implied (though this is, thankfully, not a YA story. Sorry, kids.) Wynn also has a few friends in the mines and eventually the temple, but no one of special interest to this reviewer, other than Brial, his partner at the forge, who is of limited interest in and of himself but is essential to the plot and the characterizations of the other characters. As such, the characters in Faithless would have been somewhat ho-hum were it not for the Priest, Ossan, who pretty much steals the show.

Austin-King keeps his cards close with Ossan, revealing him at times to be a kindly old Priest, supportive of the boys’ efforts to master the various chants and strokes required to earn their rings of mastery for forging special metalworks inscribed with questionably magical glyphs. At other times, Ossan is a brutal taskmaster, a mean and nasty paternal figure, and much, much worse.  Austin-King must have loved creating this character, and it shows. Ossan is deep and dark, yet fatherly and wise, and he speaks beautifully and ponderously, reminding me of old Ultan, the librarian in Gene Wolfe’s Book of the New Sun. It is a beautiful job of characterization, and almost had me rooting for the old Priest despite his numerous egregious faults.

The plot of Faithless takes a while to unfold, perhaps slightly too long. It revolves around Wynn’s episodes experiencing the extremely harsh life of the mines and his wondering what the hell he is doing there when he is supposed to be serving the temple. This is interwoven with Kharios’s search for artifacts related the Fall of the Forgefather and his religion from great mythical power to sniveling servants and peddlers of material goods, metalworks, etc. There has been a physical Fall as well, as we find out that the temple itself was a massive structure before the religion and the building imploded. It’s a clever backstory, and well developed, with a beautifully realized setting, but at times I felt I was reading a Scooby Doo novel in which Shaggy and Scooby are trapped in the mines with scary creatures while Fred and Velma search the library for clues to the mystery. Fortunately, Austin-King turns the action up to eleven as the story rolls toward its frantic, harrowing climax, and ferocious ending.

Adding depth to this overall intelligently constructed story is its main theme, which can be described in a nutshell as Do We Serve God or Does God Serve Us. The question is adeptly presented albeit conclusively answered without much room for speculation, but it does form a solid, thought-provoking glue that holds together the action, suspense, and delightful mayhem in the second half of the story.

The other main element that holds this story together is the very creative and vivid setting Austin-King has created, where most of the action takes place. It’s an underground dystopian city, Aspiration, built in a huge cavern with only a small crack at the top to let smoke out and occasionally a few drops of rain in. The characters must access the cavern through a series of ladders or a makeshift elevator, and from there they can access the mines below, and below that… who knows what lurks? It’s at times claustrophobic, but also gritty, dark, and exceedingly grim. Not only does it serve to set an appropriately hopeless, moody background setting, but it also serves to contain what is often a meandering story. If the old cliché is true that the setting should be a character in the story, then that job is done well here.

While there are many good (and some really good) things going on in Faithless, there are still some things that give me reservations about giving it