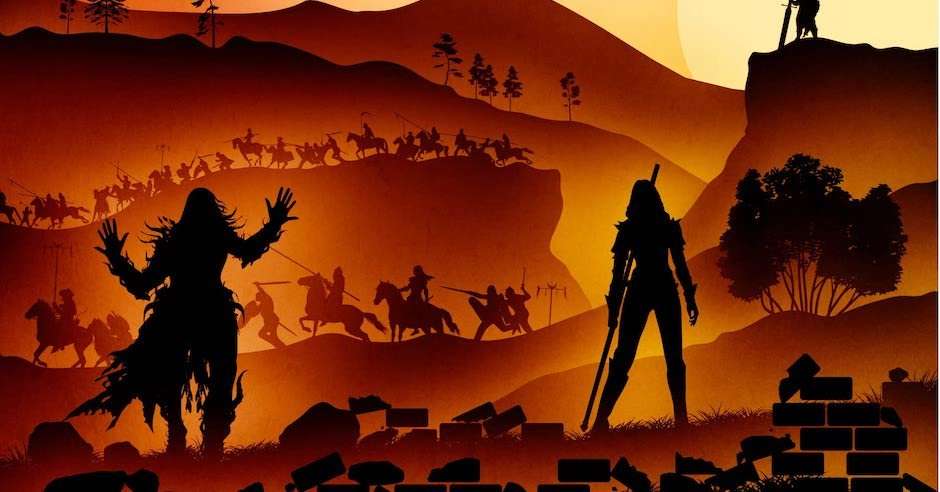 Here we go, the final doorstop of a volume in the massive tetralogy by Jesse Teller, Fate of Madness. 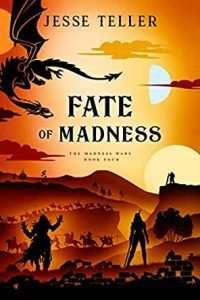 After the first three tomes, Onslaught of Madness, Wrath of Madness, and Plight of Madness, the reader is definitely invested and past the point of backing down. We’re in it to win it, or to be crushed into pulp by the Drine war machine.

Rextur is still leading the Drine forces in their conquest of Tienne, but it’s taking too long. And while he’s winning the overall conflict, the boy king Peter Redfist is still a thorn in his side, constantly turning up and sparking little victories here and there, even when he should have been killed long ago. The Madness, as Rextur is also known, is starting to feel that it’s time to push through before the tide turns.

“’Those are Lunatics out there,’ Gralton said. ‘Those are the elite of the elite. The worst, most devastating fighting force known to Drine, maybe the whole world over. If we arm man, woman, and child for them they will cut a swath through that legion of innocence that will bring an ocean of blood to crash upon this place.’”

Part of the problem is that Drine is fighting on two fronts. Besides invading Tienne, they are dealing with an internal struggle for the crown, as the aptly named Treason wages war on his half-brother, the King of Drine. As Rextur is backing his old friend Treason, this splits his assets considerably. Still, he should have enough resources to continue his campaign.

Except, now Tienne has its shit together. While the first wave of conflict had all but wiped out the nobility class of the nation, the survivors of that purge have regrouped, having found the strength within to fight for their country, and survival. Heroes of legend have returned from myth and the new powers of the land are aligning.

Cypress Qirk is solidifying her alliance between the people of the Forest and her betrothed, William of Prox. They have the men of Stonage at their backs and the First King Clark has returned to reclaim his realm.

Tarana is still maneuvering, and is poised to be joined to the First King, realizing her long dream of being Queen of Tienne. Except, it’s not shaping up to be as grand as she’d imagined. The road to her throne is difficult, to say the least. Let’s just remember that she’s been a horrible person to those around her, and things have a tendency to come back around. This is grimdark, we’re talking about.

Aaron the Marked is still leading Peter’s forces in battle, part of the four-pronged thorn in Rextur’s side. The Madness sends his most horrifying warriors after Aaron, and the boy just laughs at them.

Gale Summerstone is also part of a foursome aligned against Rextur, this one a cadre of mages. They bring new skills to the conflict, fresh young powers matched up and holding their own with the Legends of Old.

Saykobar is still moving his pieces on the board as well, this one a mage for the other side. Or is he? While he seems to be aligned with Rextur, when he’s sent to assist Treason he hatches his own agenda. Or is it the agenda of the Valkyrie he serves?

Finally, there is another aptly named protagonist, Revenge. She’s one of three sisters of Treason, and we’ll just say that they take sibling rivalry to a new level. She has been plotting the demise of her half-brother, and it seems like just about every damn one else while she’s at it.

“He smiled and Saykobar realized he had never seen that expression on the Madness before. It was a dark thing poised on a dark face that meant only darkness.”

Fate of Madness brings all of the threads together, and though there are a lot of moving parts, it all starts to make sense by the end. Well, alright. Not so much sense as it gives a feeling of completion. The story arc has concluded, at any rate. Will there be more from the seeds that were planted and the blood that was spilled? Of that, I have no doubt.

In looking back at the entirety of The Madness Wars, I can attest that it isn’t for the faint of heart. This is not a light read! It’s going to take some time and some real concentration to get through the four books, which make up a single long tale. (Five if you include the companion novel). It’s a bit of work to get through these, and at the end of a reading session, you’re going to feel like you’ve earned a pint or two.

While Teller’s style has a different feel that Steven Erikson, I kept finding myself making comparisons to the Malazan Book of the Fallen series. There’s a lot going on across a huge landscape, with many characters giving their point of view throughout the series. It can be a bit exhausting at times, like Erikson, in that there are so many threads weaving through it all that it’s easy for a reader to get lost or confused. That said, the other comparison I’d make to Malazan is that if the reader will stick with it and push through the confusing parts, the payoff is there. I can’t say that I really connected all of the dots of this massive four book megastory, but I can honestly say that I was intrigued and that I enjoyed myself. The other neat thing about a big sprawl of a story this size is that it will probably make a hell of a reread experience some day. We shall see…