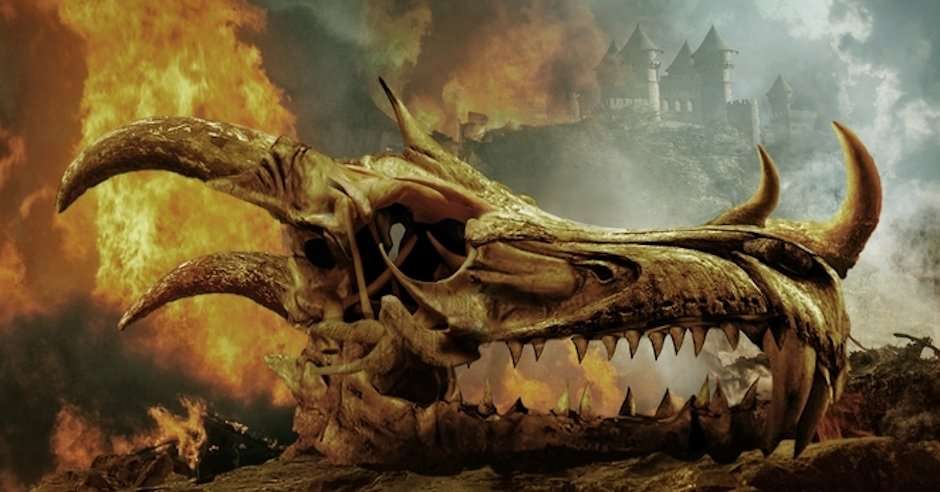 I received a review copy of The Fiends of Nightmaria in exchange for an honest review. Thank you to Steven Erikson and Tor Books. 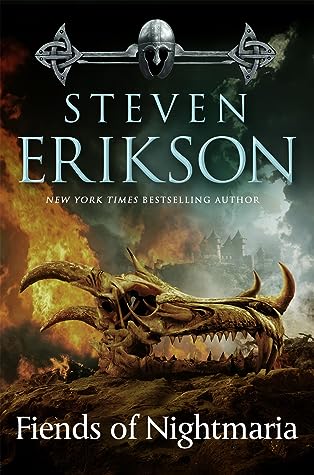 The Fiends of Nightmaria is a 112-page novella that is set within Steven Erikson and Ian C. Esslemont’s Malazan Universe and is the sixth entry in the Tales of Bauchelain and Korbal Broach series. Necromancers Bauchelain and Korbal Broach were minor characters in Erikson’s epic fantasy Malazan Book of the Fallen, only appearing in Memories of Ice, however, their performances there were memorable to many readers. The novellas featuring these necromancers are dark, humorous, and extremely fun quick reads.

The Fiends of Nightmaria takes place in Farooq. The king has been murdered and the throne has been taken by none other than Bauchalain, with Korbal Broach acting as the Grand Bishop. Since becoming a self-professed tyrant monarch, Bauchalain has emptied the coffees, arrested all actors and players for their crimes against humanity, and waged war against the quite peaceful, solitary lizard-people of Nightmaria. Add into the mix an escaped God, a demon prince, a gang of thieves looking to rescue their captured leader, and a horde of headless undead and you can get an idea of what to expect from this novella.

“Who knows what that insane necromancer’s let loose in the crypts.”

I think Bauchelain is an incredible character and that is on full display during The Fiends of Nightmaria. He’s extremely intelligent, powerful, quick-witted, and somehow absurdly likeable, having the reader routing for him in whatever dastardly scheme he’s decided to try his hand at. He’s always the cleverest man in the room, which, with all due respect, isn’t that difficult with the company he keeps in Korbal Broach. We don’t see that much of Korbal Broach here, with him being the brute force to Bauchelain’s suave and calculated coolness.

“It seems that on this gentle night, we must summon and unleash a veritable host of demons.”

The other main character in this book and in this series of novellas is Emancipor Reese who is the necromancers’ ageing manservant. He has to use drugs and alcohol to numb his mind to the acts he has witnessed whilst working for the duo. If I remember right, Reese joined the employ of these dark mages as an excuse to be away from his wife. The conversations between Bauchalain and Reese, the way they flow, and the way the two bounce off each other is an absolute joy to follow, in the Fiends of Nightmaria as much as anywhere else we see them.

For a short story, there are a lot of characters in The Fiends of Nightmaria and the majority of them have bizarre, bordering on silly names. After about 20-pages, It wasn’t that difficult to remember who was who with most of the action following either the above-mentioned three, the group of thieves, or the ensemble of actors and critics awaiting their torture and eventual execution. We also have scenes following the forked-tongued lizard ambassador and an extremely enthusiastic Commander of the Royal Farrogal Army.

I had a pleasant time reading The Fiends of Nightmaria, which sounds sort of contradictory seeing as it’s full of lots of gruesome horrors, brutal injuries and deaths, the undead, and a god who masturbates so hard his penis falls off. The Fiends of Nightmaria is a perfect example of Erikson showcasing his sillier side, in a similar fashion to his SF-comedy novel, Willful Child.

The Fiends of Nightmaria is a humorous and enjoyable, ultraviolent dark horror fantasy that doesn’t take itself too seriously and contains likeable yet fiendish necromancers. One of these novellas can be read comfortably in a couple of hours and it’s definitely time well spent, although if I’m being critical, they aren’t that memorable. (I’ve read this story before in The Second Collected Tales of Bauchalain and Korbal Broach.) I’ve tried to be pretty thorough in my review, possibly approaching spoiler territory, about some of the elements a reader can expect here as The Fiends of Nightmaria isn’t for everyone. Some may think that certain moments are sick or go too far. I’ll let you be the judge of whether this sounds like your cup of tea or not.

All the novellas in this series are standalone so The Fiends of Nightmaria is as good a place as any if you are considering just trying one of them. With Erikson though, I have to recommend his Magnum Opus, starting with Gardens of the Moon. To me, Malazan Book of the Fallen is no doubt a 10/10 series, whereas I’d give The Fiends of Nightmaria an entertaining but not Earth-shattering 6.5/10.

“By the time I’m done, the audience will be cheering for the fucking necromancers.”