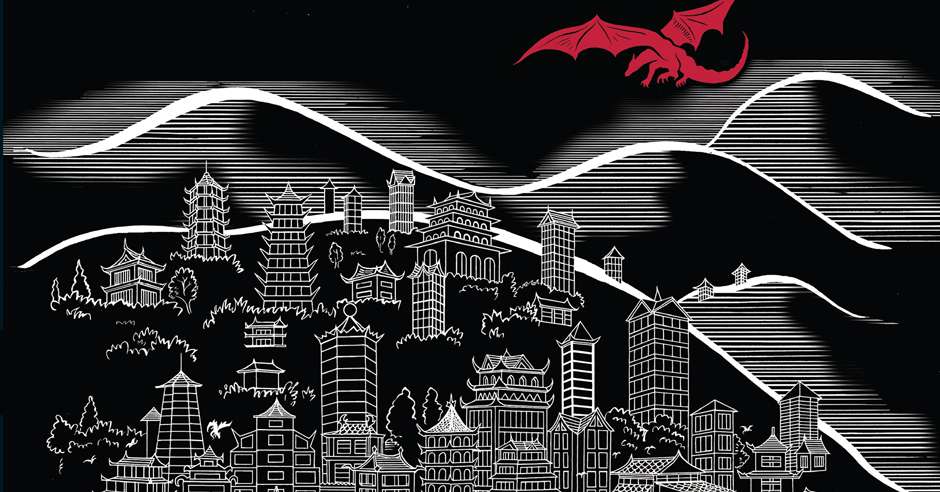 Foreign Devils by John Hornor Jacobs is the recent follow-up to his 2014 novel The Incorruptibles. It is a beautifully written, ambitious, and refreshing work even if it fails to deliver a satisfying ending to the story contained within its elegant cover art by Patrick Knowles. The story follows two main threads—mercenaries Fisk and Shoe travel the country of Ruma (vaguely Rome in the early 19th century) hunting the rogue daemonic military engineer Beleth, who is trying to start a war with Medeira (Spain), while Fisk’s wife, the daughter of an elite Ruman political functionary, and her retinue travel to Tchinee (China) as emissaries of the Ruman Empire in an attempt to assuage the Autumn Lords, rulers of Tchinee, after an unfortunate naval accident has caused the destruction of two Tchineese merchant ships by the Ruman navy. They must convince the highly offended Tchineese rulers not to join forces with Medeira in an impending war on Ruma. Yes, it’s a fairly complex situation to begin with, and it gains even more complexity as secrets and mysteries unfold. It never gets beyond comprehension, though, even for this reviewer, who was given this highly enjoyable novel to review without having read or known about its predecessor, The Incorruptibles. 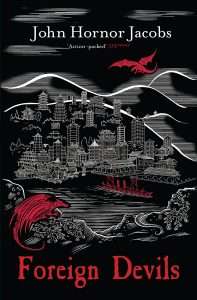 The first thing that captures the attention in Foreign Devils is the narrative technique. Eschewing the grandiose sterility of the usual multi-threaded, multi-point-of-view overarching narrative, Foreign Devils is an epistolary novel comprising letters and diary entries from three of its main characters. The effect is delightful and refreshing and provides an intimacy with the characters that is rarely achieved in the usual third-person multi-POV style. Letters are sent between Livia, Fisk, and Fisk’s sidekick, the kickass half-dwarf Shoestring, via a Quotidian, a magical transcribing device that requires the blood of both the sender and recipient to communicate instantly over vast distances. It’s part of the magical world-building of Jacobs’s setting, and though its skeleton shows through some times—the characters info-dump on some rare occasions—it is a welcome change from the default fantasy narrative technique. The epistolary style also showcases Jacobs’s masterly ability to voice the female narrator through her letters, no easy task for a male writer, when he writes from the pregnant, gun-toting heroine Livia’s perspective: “Tamburlaine [Emperor of Rume] might be able to threaten and intimidate, but …. I am of Rume. This man would not cow me. Also, I wanted a bath.” The epistolary style works great even if it is heavily dependent on the convenience of the Quotidian to make it work.

The Quotidian is part of an interesting world that Jacobs has built, combining magic and faux history. The world itself seems to be a mix of Ancient Rome, Ancient China, and the Wild West of the US. The beginning of train transportation and Hellfire shotguns locates this tale somewhere in the early 19th century but it is cleverly combined with the seedy grandeur of imperial Rome and the secret mysteries of Ancient China to give the story a unique and entertaining setting. Every mechanical contraption or explosive in this world must be imbued with a daemon or daemons to work, the job of the engineers like the antagonist Beleth. Most entertaining are the creatures of pure fantasy that populate this world including the Autumn Lords, ancient gods; vaettir, giant winged, taloned monster humanoids; and lóng, weird puppy-sized dragons that linger in the air right above the villagers and townspeople and blithely and relentlessly crap on them. The plethora of strange creatures, diverse characters from disparate imaginary nations, and the wide scope of lands and travel, all vividly rendered, make this novel a fascinating escapist experience.

The novel’s plot is perhaps slightly less original and inspiring than its setting or delivery. On the one hand there is the fairly traditional meeting of the two opposing geographical powers in an attempt to stave off a war, and on the other is the fairly common “The man in black fled across the desert, and the gunslinger followed” [Stephen King’s The Gunslinger, obviously] type of hunt for a nefarious and rarely seen villain. However, there is enough complexity in the character interactions to make these conventional plotlines compelling. For example, Livia’s brother, Secundus, travels with her to Tchinee accompanied by his lover, Tenebrae, a Ruman imperial functionary, who