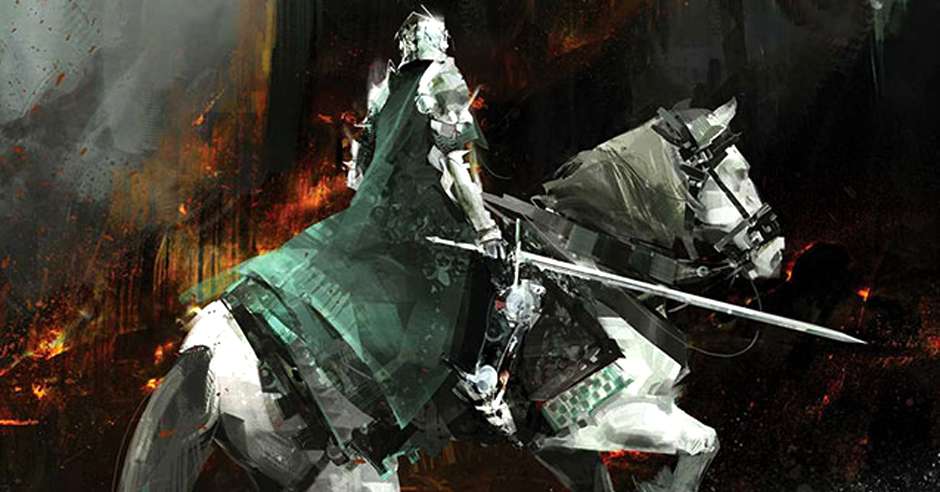 The Forgetting Moon by Brian Lee Durfee is a fantastic new addition to the grimdark fantasy landscape, and is the beginning to the Five Warrior Angels series, which promises to be an epic adventure. A rich cast of interesting characters are drawn into what, at first, appears to be a standard fantasy prophecy, but becomes far more complicated and dangerous. The world is packed full of interesting creatures, and features a mystical history that no one can seem to agree on In true grimdark fashion, nobility and morality are thrown out the window in favour of moral ambiguity, grit and darkness.

The world of the Five Isles is embroiled in a religious war seeded from different interpretations of a religion inspired by Christianity and the prophecies handed down about the looming end of days. The story begins with Nail, a young man living in a sleepy whaling village in the corner of the kingdom of Gul Kana. Unbeknownst to Nail, he has a grand destiny to fulfil and magical items that only he can wield. In Amadon, the capital of Gul Kana, Princess Jondralyn seeks to become a warrior as her younger sister, Tala, is swept into an assassination plot. Gault, a knight of the invading army from Sør Sevier, has become disillusioned with the conflict, and questions the rule of the conquering Angel Prince, Aeros Raijael. Other individuals scattered across the kingdom give further insight into the escalating war. 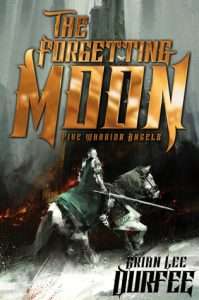 It sounds like a familiar story but, in this case, Durfee turns it on its head. Nail is far from the moralistic hero of traditional fantasy, and everyone seems to have a different interpretation of the prophecies, if they’re even genuine in the first place. The Forgetting Moon plays with the idea of prophecies and how unreliable and open to interpretation they can be. Prophecies are, personally, one of my least favourite tropes in fantasy, but The Forgetting Moon shows readers how realistic people might react if prophecies existed, and the answer, of course, is bloody.

Initially, the story doesn’t let on that it’s particularly grimdark, which makes it all the more shocking when the horrifying, casual violence appears and everything becomes ‘naught but darkness and despair’. Contrast between light and darkness is used to particular effect, and the slow build-up towards standard fantasy tropes, which are then utterly subverted, is particularly effective. While the book subverts the tropes of magical weapons and glorious destinies, it still succeeds in capturing the feeling of wonder and excitement that the best books featuring these tropes played straight elicit.

Characterisation is a particular highlight of Durfee’s writing, and there are many standout examples of this is in The Forgetting Moon. The most heroic characters can be selfish and vengeful, and the most villainous show vulnerability and empathy. A particularly memorable character, who remains so despite her relatively small role, is the vicious knight Enna Spades, enforcer of the Angel Prince. She’s honourable, funny, and emotionally vulnerable despite her tendency to dismember her enemies on a whim. Hers is a fine example of true gallows humour:

“Spades grabbed one of the baron’s severed arms from behind the triangular alcove under the propped-up crate and used it to slap the baron’s face repeatedly. ‘Wake up’ she yelled.”

She’s only one of a large cast of remarkable and perverse characters, all of whom feel surprisingly genuine.

The two main factions fighting to rule the Five Isles, Gul Kana and Sør Sevier, may at first seem to be the traditional good and evil kingdoms, but by the end of the novel it is clear that things are far more complicated than that. The rich history of the world is told to the reader in a number of conflicting versions, and attempting to sift the truth from the lies is much more engaging than just being outright told the truth. There’s a sense of grandeur and mystery present in the mysterious carvings that litter the land, the ancient relics hidden underground, and the profound horror the characters feel at the mention of the most profane of all curse words: “dragon”. This history is tied to the fates of the heroes by prophecy, and there are many layers to the story.

The world of the Five Isles features the traditional fantasy races of dwarves and ‘Vallé’ (elves), but these denizens of this complex world are not just the usual stereotypes. For example, while the dwarf Rougemoore does wield a mace, he’s a shrewd Machiavellian manipulator who prefers to use diplomacy. The world is made colourful and dangerous by the presence of murderous mermaids, whale-like grayken, killer sharks and sabre-tooth cats, who stalk craggy islands, inky seas, frozen mountains and peaceful forests.

The Forgetting Moon generally reads like you’d expect from a modern large-cast epic fantasy, similar to A Game of Thrones or Malazan, with tight third-person viewpoints that switch between chapters. One distinction The Forgetting Moon has, however, is that it frequently gives the viewpoints of minor characters as well, though some only very briefly. This works well in such a story, where half the fun is stitching together the truth from multiple conflicting accounts. The chapters differ in tone and pace, providing courtly