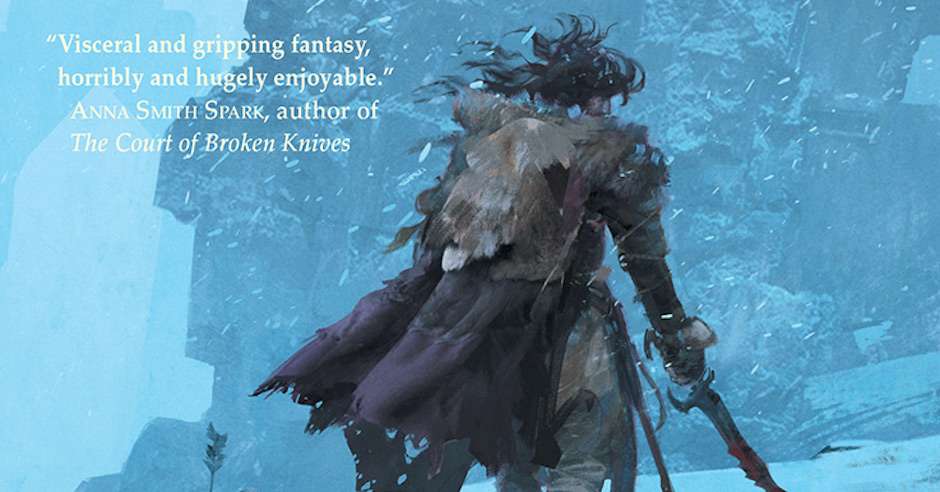 Ah, it is refreshing to read a fun gritty story. Sword-swinging action, virulent and explosive magic, and a host of quirky and entertaining characters, Cameron Johnston amps the grimdark to eleven with his exciting next installment in his Age of Tyranny series, God of Broken Things. 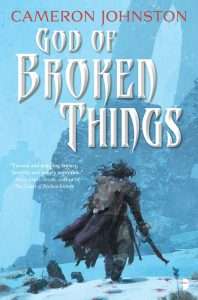 The plot revolves around the protagonist Edrin Walker, a magus that had slain the monster sent by the villainous Skallgrim, but not before it destroyed Setharis, and infected their magical elite with mind-controlling parasites. There’s almost little time to react though as the Skallgrim army marches on the mountain passes of the Clanhold, and Edrin, and his ragtag band of scumbags, must race to stop them.

Johnston depicts a beautiful and lavish world that is a feast for the imagination. I was chilled as the gang traversed the mountainous passes of Clanhold. My mouth was left agape as I lay witness to the destruction of the once towering spires of Setharis. There is magic in Johnston’s world, and not the magus kind of magic! It is literary magic that only supreme fantasists can conjure within their regal tomes of fancy and I was humbled to be allowed into Johnston’s realm, even momentarily.

Johnston’s way with words is another thing that I must mention. The base description within the generic grimdark story revolves around “action, blood, sex, magic, monsters, more action, blood, and more sex”. At times there is little to no nuisance, and this is where Johnston excels above his luminaries. To read passages such as: ‘The Scarrabus shrieked in rage…as their god-beast fell to earth, burning and unconscious, its vast mind a fragmented thing drained of all magic…they slammed through the skin of the world and its fiery blood spewed into the sky’ and ‘flesh burst in a welter of blood and from his insides a god came forth…my guts churned and my Gift burned as if I stood too close to an inferno’, not only depict the world as gritty and dark, but as magical, volatile, and bleak. Broken Things is filled to the brim with such little details that build upon Johnston’s already wonderful world.

But that’s not to say that there’s no action or monsters, far from it. Though it takes a little while to start, once Broken Things hits its stride, it does not disappoint. There are strokes with steel, arcs of flames, and witty banter between characters as others are slain before their very eyes. I greedily consumed such segments like the gluttonous child I am, only wanting more and more as I turned the pages.

Whilst I thoroughly enjoyed Broken Things, there were some parts that detracted from Johnston’s novel. The language itself was a little derivative and while his description and worldbuilding was spot on, the characters’ vernacular and narration was, at times, tedious. This was disappointing and distracted me considerably as, more often than not, wonderful tidbits of detail was placed next to lines such as ‘Oh. Fucking. Shite. I suddenly needed to piss. Badly.’. The wittiness and banter does add a layer of levity much needed in Broken Things, but there were many instances where the levity took on a life of its own. The swearing did also border on being quite juvenile and not befitting such a fantasy realm, but that may in fact be a personal qualm of mine.

The characters were, unfortunately, mostly forgettable, though that might be the fault of being in the shoes of Edrin Walker. As a first-person novel, the reader is beholden to whatever the protagonist wants to see, feel, taste, and describe, and this in no exception in Broken Things. Walker is such a lively character, his descriptions and affable nature lure the reader into wanting to follow him and only him. This might not be so bad if it was a novel centred around a solo protagonist. It becomes an issue when the novel also features a ragtag coterie of bastards bound to the protagonist and the reader can hardly remember anything memorable about them.

Overall, Cameron Johnston’s God of Broken Things is a boon to those smitten with the grimdark genre. His words and world are but mana to those in need of some gritty and lively action. The pacing works and the story remains strong, even though it does have some issues. They, however dissipate as the reader loses themselves within the pages of the novel. A wonderful addition to the Age of Tyranny series and a definite recommendation.