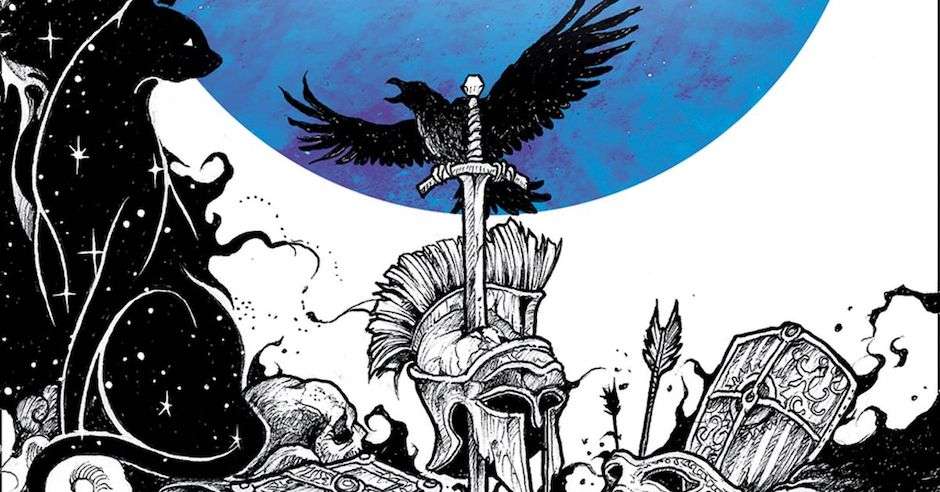 Godsgrave is the second book in The Nevernight Chronicle by Jay Kristoff. It has enough similarities to its predecessor Nevernight that I think those who enjoyed that offering would also like this. There are technical aspects of the book that are unchanged, for example it has a dual narrative where a past event is indicated by the use of italic font and the unknown chronicler uses footnotes to provide the reader with extra information. However both of these tools are used a lot less than they were in Nevernight. Style wise though, Godsgrave is still a tome full or black humour, bloody gore, and is a cleverly woven narrative that ends with a cliff hanger so tense and unexpected that I literally shouted at my copy of the book in frustration. 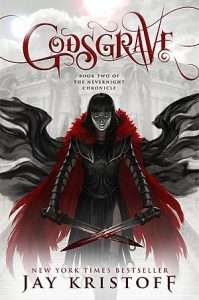 Godsgrave is a dark fantasy set in the unique world of the Republic of Itreya, which is similar to Ancient Rome in its political structure, and serves as a biography to the protagonist, a now eighteen year old assassin Mia Corvere. It picks up shortly after the climax of Nevernight and follows Mia in her early career as a Blade in the Red Church of Our Lady of Blessed Murder. Jay Kristoff opens the novel with a ‘Dramatis Personae’ of the characters, which is a great refresher if you are not reading this immediately after Nevernight, and serves as a prologue before the novel properly begins. The first chapter is in a roman style font, indicating that it is a contemporary storyline, and the early italicised flashbacks explain what we have “missed” in the interlude.

A key theme of Godsgrave continues to be Mia’s thirst for revenge and the deaths of Consul Scaeva and Cardinal Duomo. The central plot follows this mission as she abandons her position with the Red Church and sells herself in to slavery for a chance to assassinate them both when they appear at a gladiator tournament in the capital city Godsgrave, from which the novel takes its title. In tandem with this Mia undergoes some major emotional developments in the novel. She continues to process her grief at the loss of her family, but slowly starts to trust and form new relationships whilst simultaneously questioning the benefit of them and doubting their verity. This is unsurprising given that Mia has been trained to have marks not friends. The final sub plot, which I hope will form a bigger part in the concluding novel of the trilogy, is the origins of the darkin, the purpose of them, and their shadowy accomplices. Although Jay Kristoff drip feeds us with additional details about these shadow hungry beings, there remains more questions than there are answers.

I must admit, I spent a significant proportion of Godsgrave being frustrated. I had loved the previous setting in Nevernight of an assassin school and absolutely expected Godsgrave to follow in a similar vein, with the Red Church being the base from which Mia planned and executed her epic revenge strategy. To find myself instead following Mia to a gladiator collegium after she had deliberately sold herself in to slavery was entirely unexpected and threw me for a loop. Although it did not feel out of place in that pseudo Roman world to have gladiators and tournaments, I wanted more murder school and to learn more about the other Blades Mia had graduated with, not have a new host of characters and a new location. It felt like a huge jarring tangent moving away from there and where I thought she needed to be going. I simply could not work out how on earth it was not a huge waste of time. I was going to write off Godsgrave as a disappointing middle book and although it still had all the things I love in novels generally, it did not have as much of the things I had loved in Nevernight.

However I should have trusted Jay Kristoff because Godsgrave is brilliant by the end. He has woven so many conspiracies into the plot of Godsgrave that it is practically a literary cross stitch and the reveals were absolutely worth the journey. I feel that the purpose of Godsgrave is to give Mia an exquisite character arc – she is not just simply an emotionless assassin and in this novel we witness her working through some of her trauma as well as simply growing up. I do not think we would ever have thought Mia childish given what we know the character has gone through, but in Godsgrave we get to see new sides to her and I am excited to see how she continues to grow in the ultimate chronicle Darkdawn. The host of new characters are well developed and some are entirely too likeable given that Jay Kristoff openly admits he does not believe in happy endings and has no qualms about killing off characters in ingeniously violent ways.

I was genuinely getting tense as I neared the end of the book because I had no idea where it was going but was aware of how few pages remained. Those final few chapters absolutely changed my mind about Godsgrave and made me love what Jay Kristoff has created. They were a satisfyingly epic conclusion to the novel and although it had taken me a while to get in to the flow of these new parts of Itreya and the journey it was taking us on. The final chapter made me hate him. The twists in this last chapter were utterly unexpected, but entirely plausible, and in the ‘dicta ultima’ at the end of the novel Jay Kristoff made absolutely clear through the voice of the chronicler that he knew damn well what he has just done and how the reader now feels. He is a literary sadist and there is only one novel left in which he can answer the questions that remain. Godsgrave is not a disappointing middle novel, it might not take you on the journey you were expecting, but by the finale it is clear that it is an exceptional grimdark creation.