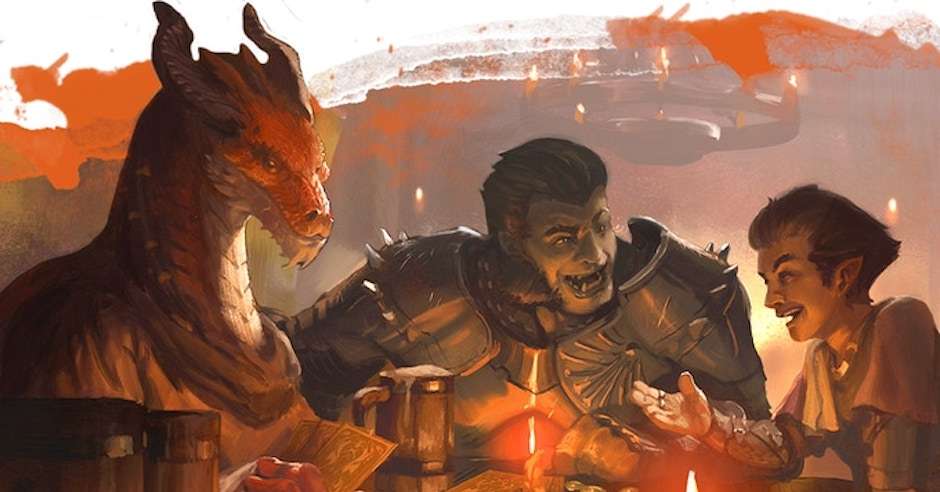 If your Dungeons and Dragons group is keen on darker, gritier adventures, Ghostfire Gaming’s Grim Hollow: The Campaign Guide might be the book for them. Set in Etharis, a land ravaged by plague, violent superstition, and a pantheon of gods who ultimately murdered one another, Grim Hollow is an explicitly grimdark campaign setting for D&D 5e. Coming in at just under 300 pages, this book contains world-specific lore, maps, and adventure modules along with new monsters, mechanics, and character options that can fit neatly into almost any D&D setting.

Etharis is a bleak world, stricken by thematic (and literal) darkness. The vampiric Crimson Court of Soma rule a kingdom shrouded in permanent night, supernatural mists cover the swamp city of Morencia, and the nordic Valikan Clans spend half their year in a frozen land without the sun.  In this darkness, mud never quite dries, and what meager crops grow come up ‘strange and bitter.’ Elsewhere, the feared Weeping Pox ravages cities, and the questionable plague medics of the Morbus Doctore offer dubious cures at terrible costs. Monsters, inhuman and human, lurk just beyond the torchlight, and the gods themselves have died or forsaken the world. Their angelic and demonic lieutenants stand in their places, answering the prayers of clerics and paladins but also frequently twisting their former master’s ideals.

If I had to compare Grim Hollow to other RPG settings, I would say it’s an interesting fusion of old-school Warhammer Fantasy vibes with a little Curse of Strahd thrown in. Most of the traditional D&D races are present, and the book describes how elves, dwarves, dragonborn, etc. all fit culturally and geographically into Etharis after a relentless, conquering tide of humanity spread across the land. Rather than adopting an outlook of simplistic nihilism (i.e. ‘the world is shite, your characters can’t change anything, and they’ll all die meaningless deaths’), I liked that Grim Hollow explicitly opts for a more nuanced tone (i.e. ‘the world is shite, but through great struggle and sacrifice, imperfect heroes can earn meaningful hope and small victories’). Fraught as the campaign is, I know my players would have heaps of fun dodging Arcanist Inquisition witchhunters or navigating the deadly corruption and intrigue of the Venice-esque Morencia. After reading the book cover to cover, I was left with the impression of a quality grimdark setting with lots of potential for gritty, morally ambiguous, and ultimately memorable adventures.

Getting into the mechanics of Grim Hollow, the book starts by offering players new character options. These include feats, spells, curses, and advanced weapons (gunpowder included). Many of the feats feel unique to Etharis, (‘Weaver of Maledictions’ makes curses more effective, ‘Blackpowder Expert’ goes alongside firearms, etc.) but others are more generic. The case is similar with spells with some seeming specific to a dark fantasy setting and others feeling a bit tacked on. Curses, on the other hand, are flavorful and right at home in a Grimdark campaign. Each of the new spells can be taken by most classes with access to arcane or divine magic and requires a specific talisman of heretical Shadowsteel to cast. The ‘Curse of Uncontrollable Wrath,’ for example, needs a weapon that belonged to the target, a severed hand, and a shadowsteel knife, and a successful casting gradually twists its victim into a demonic Avatar of Slaughter. These curses come complete with some really neat mechanics–namely a table to determine the saving throw against a curse based on the target’s crimes against the caster, how well the caster knows the target, etc. While I can’t see curses replacing fireball or polymorph as a wizard’s go-to spell, they’re a really cool brand of Etharis-specific magic that provide potentially great roleplaying and story material and tie smoothly into the campaign’s theme of vile transformations (more on this later). 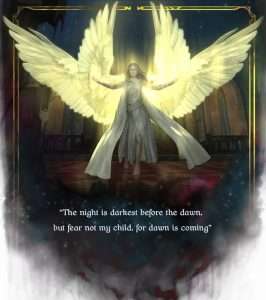 One of Grim Hollow’s major offerings is a set of variant ‘Advanced Backgrounds’ that can be applied to almost any campaign. Expanding greatly upon 5th edition’s selection of character creation backstories (soldier, sage, criminal, etc.) this section provides more choices and expanded mechanics on each. Rather than simply taking a background at first level, each has four tiers. Choosing the ‘Inquisitor’ background, for instance, allows players to advance from ‘Initiate’ to ‘Inquisitor,’ to ‘Chapter Master,’ and finally, ‘Grand Theologist Inquisitor’ as they level and meet specific milestones. Each tier comes with benefits–owning property, underlings to command, political power, access to supplies, a levelable profession ability, and so on. As a DM, I really liked this concept. An advanced background gives PCs something to want and work for, and it can also go a long way to getting players invested in a setting as they rise through the ranks of their own profession and find their place in the campaign’s world.

The ‘Transformations’ section of Grim Hollow is likely its most iconic feature and one of its major selling points. After meeting certain rule and roleplaying requirements,the book gives players the choice to transform their characters into a variety of (mostly sinister) creatures. Options include eldritch aberrations, vampires, liches, lycanthropes, fiends, and celestials, and each comes with a unique set of benefits, drawbacks, and roleplaying challenges. Transforming into a fiend, for example, requires a minimum charisma of 13 and an infernal pact, dark ritual, demonic rebirth, or the like in the actual narrative play of the game. In exchange, the player gains bonuses to their intelligence and charisma as well as the ability to make contractual bargains with NPCs on behalf of the infernal powers. These boons come with the negative side effect of ‘Planar Binding’–essentially being easier to kill at 0 hit points as the Nine Hells try to drag the character home. This transformation and all others can be leveled up by hitting specific milestones. This might mean usurping a rival demon on the infernal hierarchy for the fiend, building an undead army for the lich, drinking the blood of a dragon for the vampire, and so on. Higher tiers of transformations unlock new powers, but also increased drawbacks that can include a hideous, twisted appearance, an uncontrollable appetite for flesh, blood, or souls, and worse. 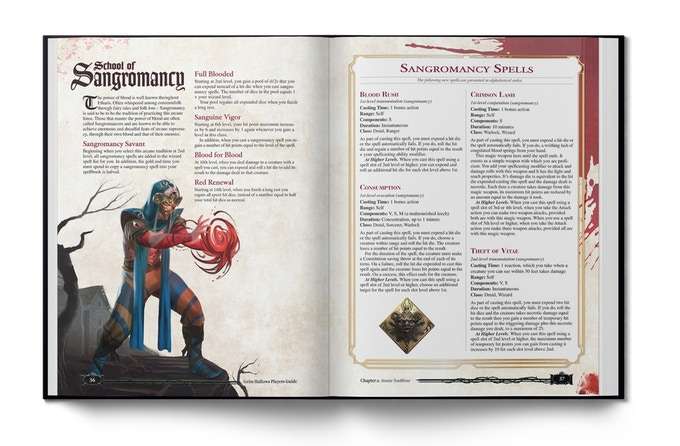 I liked ‘Transformations’ for multiple reasons. In addition to simply looking like great fun and letting PCs turn into previously unplayable creatures (I found Grim Hollow when I wanted to play as a lich, as it so happens), they tie nicely into the key theme of Etharis: man, monsters, and the often blurry line between the two. With the new curses this book presents also potentially twisting their victims into various horrors, there are some really cool grimdark roleplaying possibilities here–maybe even the potential for Abercrombie-style downward spiral character arcs.

One chapter of Grim Hollow that might catch GDM readers’ interest is the ‘GM’s Guide to Dark Fantasy.’ It presents useful advice on weaving elements of the dark fantasy, grimdark, horror, and dark fairytale genres into your campaigns as well as mechanics to go along with them. We get new rules for grievous/permanent wounds, new poisons, drugs, and diseases, a handful of magical contraband items, and some more general variant rules. In my experience, D&D 5e is a system that’s well suited to tell high and heroic fantasy stories with, for example, players able to rest for eight hours and recover from nearly any wound. I think the tips in this section will prove useful to any gamemaster trying to tweak and tune their game for a grittier experience and make their players feel a little more vulnerable in Etharis or a world of their own creation. If I had one criticism of this chapter, I would have liked to see a few more artifacts and magic items. Earlier in the book, for instance, the regalia of the mad Emperor Leopold I shows up in lore. Leopold’s cruel insanity was so great that it tainted the Bürach Empire’s sanctified crown, sword, sphere, and breastplate and drove the deities who had originally blessed them to slay one another. I was hoping to see the in-game effects for the regalia and other artifacts, and it feels like a bit of a missed opportunity to only get four new magic items.

The book concludes with three complete adventure modules, and each one seemed like a great way to introduce your group to Etharis. ‘Tavern of the Lost’ sees the party fleeing to the safety of a strange inn, only to find that they can’t leave. ‘Facets of Darkness’ puts the players in the urban slums of the Pit and in the middle of a drug war between rival factions. ‘The Blood Knight and the Five Relics’ sets players against the gore-smeared revenant of a once-noble warrior and tasks them with solving the mystery of his violent reappearance. For a campaign guide that includes a detailed setting, character options, and so on, this felt like a generous inclusion, and each of the adventures came complete with color maps and plenty of NPC art.

Although this isn’t an officially published Dungeons and Dragons 5th edition product, this book is definitely as professional, polished, and lavishly illustrated as anything Wizards of the Coast produces. The hardcopy was a little pricey when I picked it up (but really only due to shipping–like many of the finest grimdark creators, Ghostfire Gaming is based in Australia), but I’m glad I sprung for it. The pages are generously filled with awesome dark fantasy art pieces–plague doctors, moody landscapes, armored vampire lords, new monsters, and more–that are best experienced in print. In terms of physical quality and production value, Grim Hollow is up there with the best on my TTRP shelf, and my copy has proven itself sturdy in the year and change I’ve owned it

If you’re a player, dungeon master, or someone who just enjoys flipping through RPG books, is Grim Hollow: The Campaign Guide for you? I would say yes. While the setting and Etharis-specific content do make up a large portion of the book (and are excellent in their own right), much of the content presented can fit any campaign. The new spells, feats, weapons, monsters, grimdark GMing advice, and transformations slot smoothly into most fantasy settings with little to no modification. In my own Waterdeep Dragon Heist campaign, for example, our bard has opted to become a vampire, and the Grim Hollow transformation rules mesh seamlessly into our game. In terms of content, layout, and quality, this book brought to mind the Forgotten Realms Campaign Setting supplement (one of my old favorites) from 3rd edition D&D. If it’s any indication of how much I liked it, I’m already planning an Etharis mini campaign over the summer. Taken as a whole, I would give this book a full five stars and crown Grim Hollow the definitive dark fantasy setting for D&D 5e.

Click on the image below to head over to the Ghostfire Gaming story to purchase your copy.