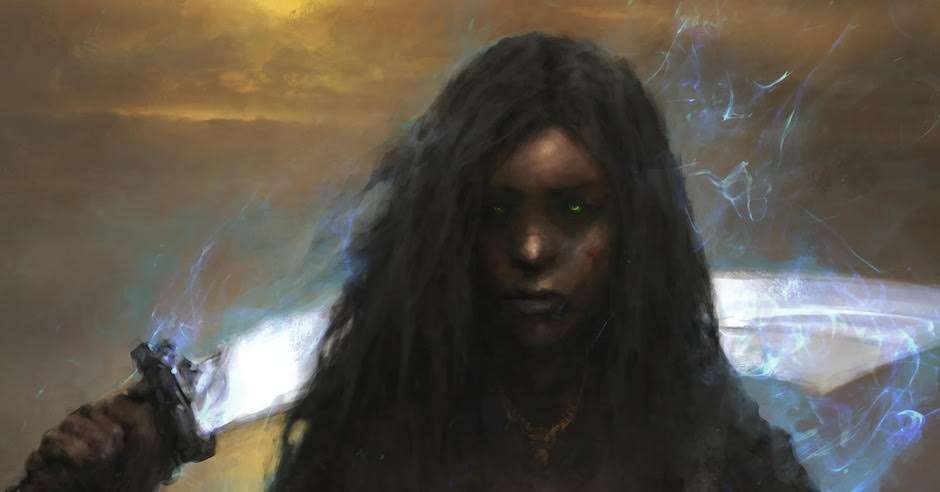 Just like me, you should be very excited to be back in Araxes in Grim Solace, where death is not the end, but just a new form of half-life. In book two of Ben Galley‘s Chasing Graves trilogy, Caltro is still very dead and pissed at this fate, the dead gods, and Boran Temsa (who levelled his game up quite considerably since Chasing Graves) just to name a few. As Caltro fights for justice and his freedom, he constantly finds himself being tossed around like a leaf on the wind since everyone wants to put their hands on him. 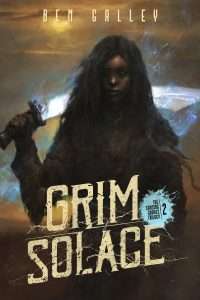 Tor Busk, the Widow Horix, and Boran Temsa are all playing a game of their own in which they all wish to use Caltro’s skills as the best locksmith. Little do they know who is the real puppeteer behind the scenes. Caltro only learns about it while plotting his own escape. And boy, this is going to make you sit on the edge of your seat, waiting for the conclusion. Sadly this happens toward the end, and we’ll have to wait until the third and final book of the trilogy to find out how this information will shake things up plot-wise. Grim Solace has everyhing I liked in Chasing Graves and then some more.

“Every reason is a little story we tell ourselves to dress up our desires. We offer reasons to explain or excuse ourselves, to fit in.”

While trying to get his life back—as much as remained of it anyway—Caltro learns a few new tricks and makes a new friend. Pointy is a centuries old-deadbound sword, which is a bit in love with its own voice as well as poetry, and it’s driving Caltro crazy. But Pointy comes in handy when Caltro needs knowledge and a weapon which is, well, pointy. Fortunately, amidst all the chaos and visits from supposedly dead gods, Caltro never loses his dark humour and sarcasm.

“They say there is a beauty in hindsight, but I say it is an ugly creature. Almost as ugly as its daughter, regret. Life is made of many paths. The cruel joke is you can only choose one, and move only forwards along it. Regret is the bitch that follows behind you and paves the paths you didn’t take with gold and glitter.”

Besides Caltro’s ever so complicated plotline, we still have Nilith’s. Personally for me that plotline was the weak point of Chasing Graves until the end where some truths are revealed, and her identity and importance are made clear in the grand scheme of things. This time around she grew on me because of her fierceness, no-nonsense attitude, the way she put Farazar in his place, and most importantly her bantering with Bezel, the strangebound falcon—the same bird which was supposed to spy on her.

“Nilith slumped back to the sand, chin on arms. She stared up at the falcon. ‘I don’t feel very royal.’

‘Royally fucked is what you are. Now you know why these nomad types call their wine daemonjuice, don’t you?'”

I’m usually no fan of the traveling trope, and sometimes I felt these bits dragging, even though there was plenty of actions. For example, we get to see Kal Duat, a place where stones are produced for the price of lives. This is where it really sinks in for Nilith how things go outside of Araxes, where the King has no real authority. All the while, they are still chased by the Ghouls, whom they pissed off in Chasing Graves. However, all the tension and hard truths are balanced by comical scenes such as where a donkey gets loose thanks to its wings. I’m actually sorry we don’t read more about the nomads Nilith and her companions come across in the desert just outside of Araxes. Just before reaching her destination she finds herself in very tight situation. If nothing else, that really makes me look forward to read the final book.

Besides all the old “friends” we made in Chasing Graves, Galley introduces some new ones. One of them is Scrutiniser Heles, working for the Chamber of the Code. Her task is to find the one responsible for the increasing attacks on the nobles of Araxes. I instantly took a liking to her, thanks to her being fierce, loyal and that she is not afraid to take on a confrontation when she feels an injustice was done. She is also quite cynical after all the years spent in service and the fact she has seen more death she would have liked.

“Fortunately for Scrutiniser Heles, it had been five years, maybe more, since her mood could remotely be classed as “good.” The best she hoped for these days was “mildly disgruntled””

Even though she only played a minor part in Grim Solace, I have a feeling we’ll see more of her in A Darker Shade. She had grown to be one of my favorite characters this trilogy had offered so far.

In Grim Solace Ben Galley turns up the grim-o-meter to eleven and is not afraid to soak the pages in blood and gore. It’s a good step up from Chasing Graves and sets a good foundation for the grande finale. Political intricacies, massacres, dead gods, and a pending doom waits for those who are brave enough to step on the soil of Araxes. Or a big pile of copper coins and title if they are smart and ruthless enough. What fate awaits you?