Hack/Slash by Tim Seeley is a homage to the slasher movies of the 80s, Buffy the Vampire Slayer, and Goth girls. If there was ever a comic book that was made for me personally then this is it. Grimdark fans should note that this is a hard-R comic book that deals with surprising issues of loss, violence, family, and trauma in addition to giving a spectacular collection of gory kills. As a fan of the slasher genre, it is also a work that adores its beautiful heroine in every panel as well, though I’m not a fan of the omnibus’ cover I will admit. 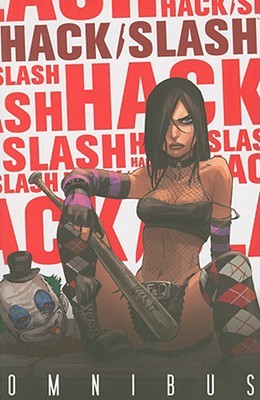 The premise is the world is infested by a race of revenant-like monsters called slashers. In life, they are a bunch of homicidal serial killers compelled to kill by their DNA but this is only the beginning of their evil. When a slasher is killed, they rise from the grave as a nearly unkillable zombie. It’s a delightful way to justify the seeming invincible status of such monsters as Leatherface, Michael Meyers, and Jason Voorhees. It also provides our protagonist with a seemingly endless supply of enemies to destroy.

The protagonist is Cassandra “Cassie” Hack, a young girl who had the misfortune of having a slasher as a mother. The Lunch Lady killed her schoolyard bullies and then, after dying, came back to her daughter. Cassie was forced to put her mother’s revenant down and thus dedicated herself to the destruction of slashers everywhere. Along the way she picked up a partner in Vlad, a deformed but good-hearted giant who bears a not-insignificant resemblance to the previously mentioned Jason (only he wears as a gas mask instead of a hockey mask).

The first omnibus has a collection of excellent Hack/Slash tales started with “Euthanized”, which is about as serious as the series tends to get. I also enjoyed “Good Girls Gone Dead” which is about a young fundamentalist using black magic to get revenge on a bunch of hapless Spring Breakers. There was also the entertaining “Slice Hard” that had Cassie have to choose between making a deal with scientists to help Vlad and avoiding the inevitable catastrophe that studying slashers is bound to create. We even have a crossover with Chucky and the short-lived Chaos Comics character Evil Ernie.

Cassie Hack is an immensely entertaining protagonist as she manages to evoke sympathy, desire, and support for her kickass ways. She’s a sarcastic and snarky heroin ala Buffy but lacks Ms. Summers’ support system. While Vlad is her best friend, she is almost suicidal in her desire to continue throwing herself into battle against slashers because she is utterly alienated from regular people. Even when they reach out and try to provide a support system, typically the people she’s rescued, they are people she avoids.

The art of the book is spectacular with vivid and beautiful depictions on every page. I particularly love Cassie Hack’s design and think of her as one of my all-time favorite art pieces. The designers are clearly aware of Cassie’s appeal to those who like alternative girls and we’ll even see her become a Suicide Girl later on in the series. The action is fluid and there’s a lot of humor in the background that works well.