REVIEW: Half a War by Joe Abercrombie

Half a War is the concluding instalment of Joe Abercrombie’s epic Shattered Sea trilogy. It is a satisfying conclusion to the saga but it is hard to say how without spoiling some of the plot! Suffice to say almost all the questions Abercrombie has posed get answered and many loose threads tied off but I still feel like there is scope in this world for more. 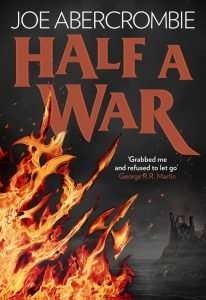 As with the first two books Yarvi is a pivotal character. In Half a War Yarvi remains the Minister to the King of Gettland and unsurprisingly he is the architect of the new, rather shaky alliance with their former foe of Vansterland, and their joint war against Grandmother Wexen and the High King she serves. We do not have as much of Yarvi in this novel but his presence is still felt throughout. I feel that in this book more than the others Yarvi has become a true grimdark protagonist. Perhaps that is because the character has aged a little, as well as a culmination of the prior events in the series but he is so deliciously grey in Half a War. Yarvi is not a hero and although he is incredibly cunning and clever, Half a War shows his mental flaws in a never before seen way.

Abercrombie continues to have an ensemble of main characters and new narrative perspectives in Half a War as he did in Half the World. Yarvi, Thorn Bathu and Brand are still key players in this instalment but they share the page with three new faces. The first of these is the Princess Skara of Throvenland, a war refugee seeking sanctuary and an alliance with Gettland and Vansterland so that she can reclaim her lands and throne which have been annexed by the High King. Skara has lost almost everything but has a mind that could match Yarvi so it is very interesting to watch her storyline unfurl. Though I will admit that this is one of the few times in the series that I felt a character was a trope, a defenceless maiden in need of saving from the cruel world. However I feel this initial presentation and subsequent character development was absolutely intentional from Abercrombie. Indeed I would not be surprised if Abercrombie chose to carry on Skara’s story if he were to return to the world of the Shattered Sea.

The next new character perspective we have is Raith, a sworn sword to the King of Vansterland. Like Thorn, Raith is described as being ‘touched by Mother War’ so he is another warrior perspective and offers an almost total contrast to the third point of view character, Koll.

Koll was a minor character in the previous book, but in Half a War he plays a greater role as Father Yarvi’s apprentice. There is an even balance to the ensemble between the born fighters, peacemakers, and masterminds but it at times feel convoluted. I liked the switch of perspectives in Half the World, Thorn and Brand were engaging and I cared for them even if I did not always like them. It was almost too much to have these three new key characters in the final novel of the trilogy and expect to form the same bond with them without going in to more depth than Abercrombie does. I think that is why they sometimes feel superficial and gives an inconsistent pace compared to the earlier novels.

However, that does not make Half a War predictable. As the title suggests, we only see the war from one side, so the vicious schemes of Grandmother Wexen, the battles, their gains and losses pack a strong punch. There are other twists and turns that blindsided me and have left me wanting to know so much more about the history of the Shattered Sea. This is the first time in the series that I found it frustrating that there has not been the same detailed world building here as there is in other grimdark realms.  In Half a War Abercrombie has mostly the same fast pace as he did in the previous two novels in the series which make it a tense and engaging. It is a tumultuous journey and there are enough bloody battles, betrayals, and bombshell revelations that it is an enjoyable read to most fantasy fans. I like Half a War for the part it plays in the trilogy but I do not think it could be read as a standalone novel in the same way Half a King or Half the World could, it definitely needs the support and preamble its predecessors afford it to be appreciated.

Read Half a War by Joe Abercrombie