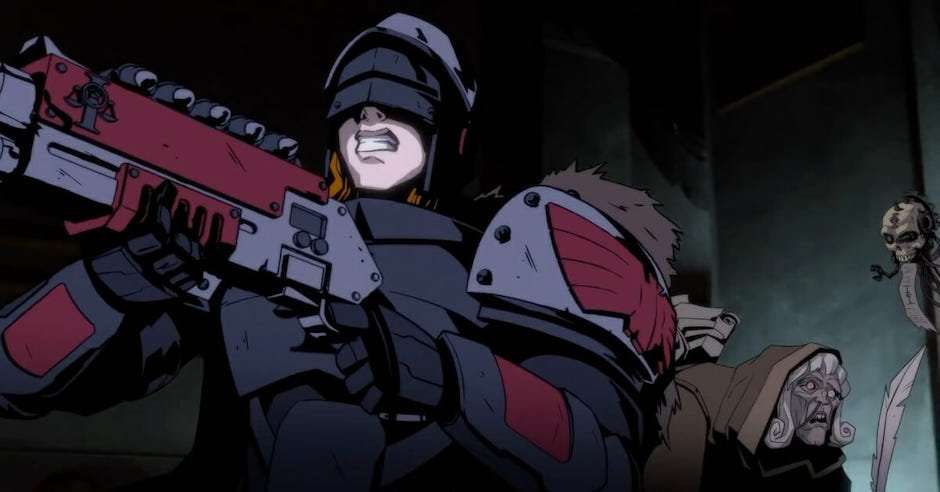 In Deaths Hand, the first episode of Hanmer and Bolter released on the new Warhammer+ platform, Inquisitor Kiamoro’s death has been foretold, and he’ll do just about anything to stop it. He’ll kill sanctioned psychers, consort with aliens, and sacrifice just about anything. With internment on Terra his reward for two centuries of service to the Throne within arms reach, can he make it?

Animated in a manga style, Death’s Hand is a complete and brilliant short story (I’m assuming the Hammer and Bolter series will be a new story each release, unlike the Angels of Death or Astartes animated series also showcased on Warhammer+). The manga style is certainly not my visual preference, but hats off to the team for writing an excellent and fun story to create from. It’s fun, punchy, has good twists, and from that very first scene I just knew I was going to enjoy it.

Without a focus on space marines or the Guard, there’s a lot to unpack here from a factions perspective, and the nature of Inquisitors who get a fair bit of grey areas, comparatively, gives the creators plenty to play with. If you enjoyed Eisenhorn by Dan Abnett, then I think you’ll enjoy this.

Death’s Hand is a thoroughly enjoyable start to the Hammer and Bolter series and one I’m sure most 40k fans will enjoy. Starting off Warhammer+ with a space marine and an inquisitor series was an excellent decision—and here’s hoping the next episode is just as good as the first.