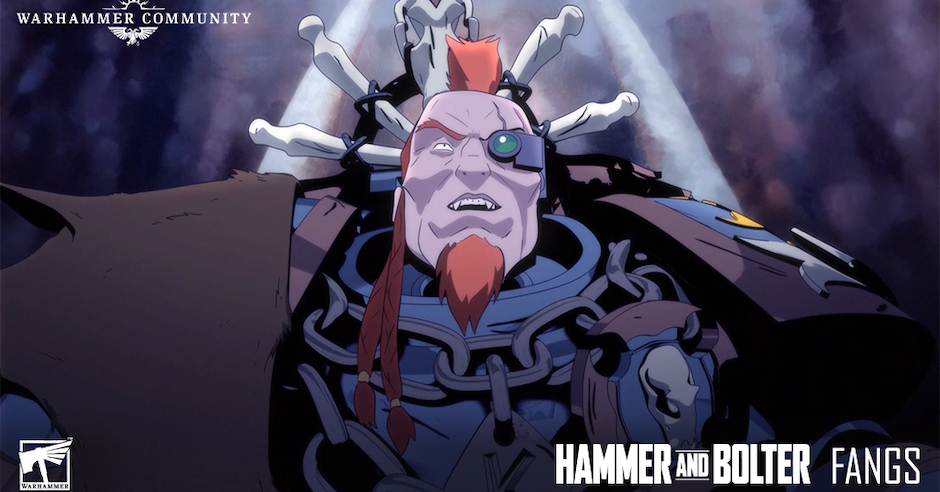 In episode 4 of Warhammer TV’s Hammer and Bolter, Fangs, we finally get to my favourite 40k faction, the Space Wolves space marines. On the death world of Fenris three veteran Space Wolves sit around a gaming board waiting to see which young human aspirants survive to join the ranks of the Space Wolves.

At the same time three young men try to attract the attention of the Space Wolf selectors (known to the tribes of Fenris as Sky Warriors) through their martial prowess in hunting down and killing some of the monsters living in the frozen desert of their world. Should they be chosen, they will become space marines.

To the space wolf fan, it’s cool to see Ulrich the Slayer and Njal Stormcaller as characters in Fangs, as is it just damned cool to see the space marines in their first Hammer and Bolter appearance. The depiction of the Space Wolves fortress, the Fang, is suitably epic, and I enjoyed the blustery manner of the Wolves—very aligned to Bill King And Lee Lightner’s version of them in the Space Wolves six book series, versus, say Abnett’s more dour and regally feral (if I can say that) version of the Wolves in the Horus Heresy series.

In Fangs the fight scenes were pretty average, to be honest. Perhaps It’s  just part of this style of animation, but they didn’t seem to have much fluidity at all, nor believability. As these scenes make up a fair amount of the episode, this left me a bit disappointed.

Overall, an episode I enjoyed because I’ve loved the faction since age 14, because I’ve read about and even gamed with some of these characters on the tabletop, not because it was a great episode.