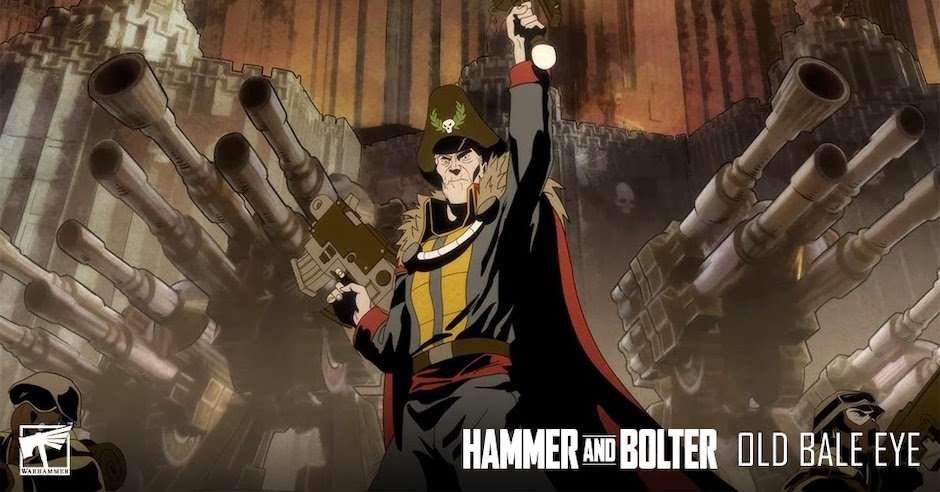 In Old Bale Eye, the latest episode of Warhammer+’s Hammer and Bolter, an orc leader (a “Nob”) tells two of his boys the story of when the ork warlord Gaskull Thraka took on Old Bale Eye (known to Imperial fans as the great Commissar Yarrick). Essentially, this is mostly the story of the legend of Yarrick, from the Orks perspective. And it’s actually a really cool way to present the story.

Orks are an odd faction, primarily a comedic kind of army. They are a green horde of pure muscle and aggression strapped with looted and bootlegged weapons of often ridiculous firepower. And they love a good scrap. They live for it and chase it. They are fun, a bit silly, and I honestly don’t see much of an opportunity for their character growth to drive much interest outside of the ork-specific fan base. It’s probably why there aren’t many ork-POV Black Library books.

But in Old Bale Eye they are shown to be storytellers—a method of passing down history that I think is really cool and a believable method of history recording for the faction. The story definitely lands as our Nob talks of battles long past and a rivalry of epic proportions that chews up orks and men in their millions as one chases the other across the galaxy.

One thing I wasn’t a fan of in Old Bale Eye was how both factions—human and ork—spoke the same language. I thought it would have worked better to have the humans shouting at the orks in gibberish, personally. There was also a twist in the story that, well, I’m not sure if it’s an older piece of lore that hasn’t been written out of the more modern lexicon, but seemed to push the suspension of disbelief just a bit too far for me.

Old Bale Eye is an interesting episode, and one I think that’ll definitely appeal to the ork faction fans more than others. It may also appeal to those Yarrick / Guard fans. Overall a great concept for delivery of an ork story, and once again I am really excited to see what next week’s of Hammer and Bolter brings.

You can find out other Hammer and Bolter reviews here.