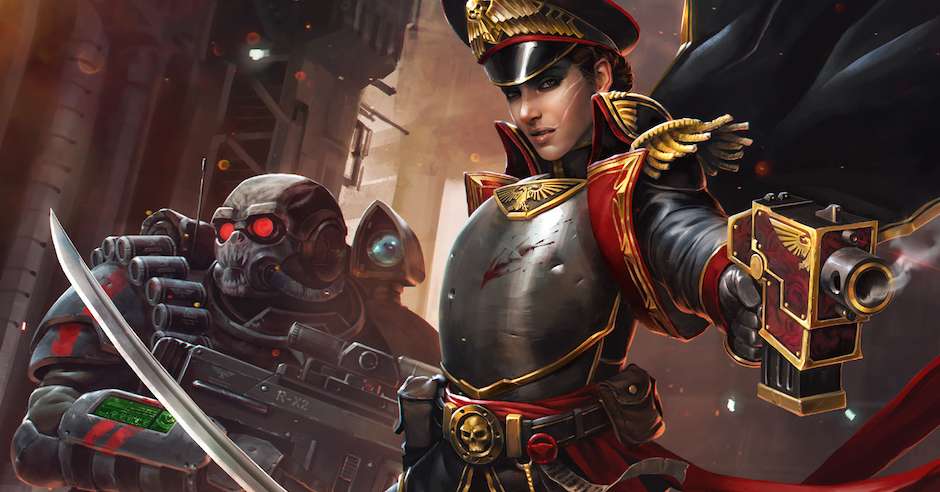 Around a year or so ago, Rachel Harrison, then the author of a few prior 40K shorts, began churning out short stories focused on Severina Raine, a commissar attached to an Astra Militarum regiment called the 11th Antari Rifles. The backdrop for these stories was the expansive Bale Stars Crusade, which pitted the Guard regiments against a massive Chaos cult known as the “Sighted”. By the time Honourbound was released, there had been two or three shorts released; there are currently five Raine short stories in circulation: Execution, A Company of Shadows, Fire and Thunder, Trials, and The Darkling Hours. I have not read/reviewed any of these shorts, therefore my take on Honourbound will be as a reader getting first acquainted with the storyline. 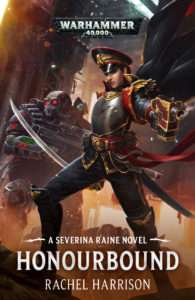 There was a bit of pomp and circumstance surrounding the release of Honourbound. An entry introducing the character made it to the Warhammer Community page; and not only did the book drop with a hardback release, but Raine, as a character, received an official Games Workshop mini right out the gate. How often does that happen? Consider how long it took for Eisenhorn to get his official mini….

The point is, there is a sense of marketing around Honourbound that makes it seem as though Black Library is looking to make a franchise out of Raine and the Antari Rifles. It makes sense, if you think about it; with the cornerstone Gaunt’s Ghosts series is winding down, why not pass the torch to another Astra Militarum series centered around a tough but caring Commissar, her doughty charges, a massive Crusade, and a huge Chaos menace?

The question comes down to the quality of the book, of course. Before breaking Honourbound down, I’d like to mention that even though Harrison has a slew of short stories under her belt, this is her debut novel (congratulations!). Also, the novel she has delivered is a hefty door-stopper, weighing in at just under 500 pages (most Guard novels come in at a leaner 200-300 pages).

Let’s look at the blurb first, and then evaluate Honourbound bit by bit:

Uncompromising and fierce, Commissar Severina Raine has always served the Imperium with the utmost distinction. Attached to the 11th Antari Rifles, she instills order and courage in the face of utter horror. The Chaos cult, the Sighted, have swept throughout the Bale Stars and a shadow has fallen across its benighted worlds. A great campaign led by the vaunted hero Lord-General Militant Alar Serek is underway to free the system from tyranny and enslavement but the price of victory must be paid in blood. But what secrets do the Sighted harbour, secrets that might cast a light onto Raine’s own troubled past? Only by embracing her duty and staying true to her belief in the Imperium and the commissar’s creed can she hope to survive this crucible, but even then will that be enough?

What makes Honourbound a tough nut to crack is that there are some truly great elements to it; and yet, there are some elements which are not handled so well. It is never anything less than ambitious and compelling; therefore it unfortunately becomes hamstrung by the poorer elements.

The content of Honourbound reflects a convergence of three storylines–first, as mentioned earlier, covers the Antari Rifles as they take the Crusade to the Sighted across the Bale stars. This arc gives us a yield of three massive action set pieces.

Secondly, we have, interspersed throughout the narrative, flashbacks to Raine’s youth. We see young Severina, and the time she spends with her sister, Lucia, her training and rise through the Schola, and her earlier interactions with the upper echelons of the Bale Stars Crusade hierarchy. These flashbacks are the best written installments in the novel; conveying genuine emotion and illustrating the inputs which forged Raine into her present-day incarnation.

Finally, there is a third arc, a subplot, which follows potential malfeasance within the Crusade itself. While ambitious in concept, it is mundane and by-the-numbers in execution. A random event sets it in motion; evidence is revealed with implausible convenience, and the climax is an overly-theatrical, melodramatic miss, bereft of any logical underpinning.

The dramatis personae in Honourbound is well-thought out, and created with care. Meticulous detail is bestowed on development for even secondary and tertiary characters; which is appreciated, as seeing characters relegated to the status of ‘window dressing’  in other novels can be frustrating.

The only problem is, these richly-developed characters are confounded by some genuinely bad dialogue. There are way too many examples of cliched, cinematic