In the Night Wood is an ingeniously written Gothic horror novel by Dale Bailey, which serves as both a tribute to classic Gothic literature and a unique, riveting story in its own right. 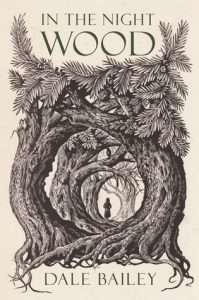 As the novel opens, the narrator, a boy named Charles Hayden, is strangely captivated by an obscure fairy tale, also called In the Night Wood, written by the enigmatic Victorian author Caedmon Hollow.

The story jumps ahead to Charles at graduate school, where Caedmon Hollow is the subject of his doctoral research. During a late-night study session, Charles literally bumps into the love of his life, Erin, at the university library. As fate would have it, Erin is a direct descendant of Caedmon Hollow. Charles promises to give her a “happily ever after,” and six months later they are married.

Fast forward another ten years, and Charles has lost his job as an English professor at Ransom College. Even worse, Charles and Erin’s only daughter, Lissa, has perished in an unspeakable tragedy. Their marriage is broken, and Erin is abusing prescription drugs to numb her pain. Charles and Erin move from America to the English countryside, where she has inherited the Hollow family estate.

Alongside the Hollow House is a dark forest curiously like that described in Caedmon Hollow’s fairy tale. The locals repeatedly warn Charles and Erin not to explore the woods, since people get lost there and never return.

Charles tries to overcome the grief of losing his daughter by throwing himself into his next academic project: an authoritative biography of Caedmon Hollow. He discovers many lost writings from the mysterious author, including a peculiar cipher that becomes a focal point of his obsessive research.

However, Charles is also haunted by the ghost of his dead daughter and by frightful images of the Horned King, the legendary fae king from Hollow’s fairy tale. The nightmarish images are shared by Erin, but the couple cannot bring themselves to discuss what they are seeing.

Meanwhile, a local girl has gone missing and is presumed dead. Four girls with similar names—Lissa, Lorna, Livia, and Laura—also share common physical features and a common story. Or perhaps a common curse?

As In the Night Wood progresses, it becomes unclear whether Charles is learning the truth about the seemingly inscrutable Caedmon Hollow and the real-life origin of his fairy tale, or if he is just descending deeper into madness.

Frankly, the beginning of In the Night Wood is a little shaky. The time jumps in the early chapters occur rather abruptly, but in the end they serve an important narrative purpose. The story improves dramatically as the novel progresses, especially in the second half. Overall, In the Night Wood is an excellent read and highly recommended for anyone who loves Gothic horror.

Read In the Night Wood by Dale Bailey