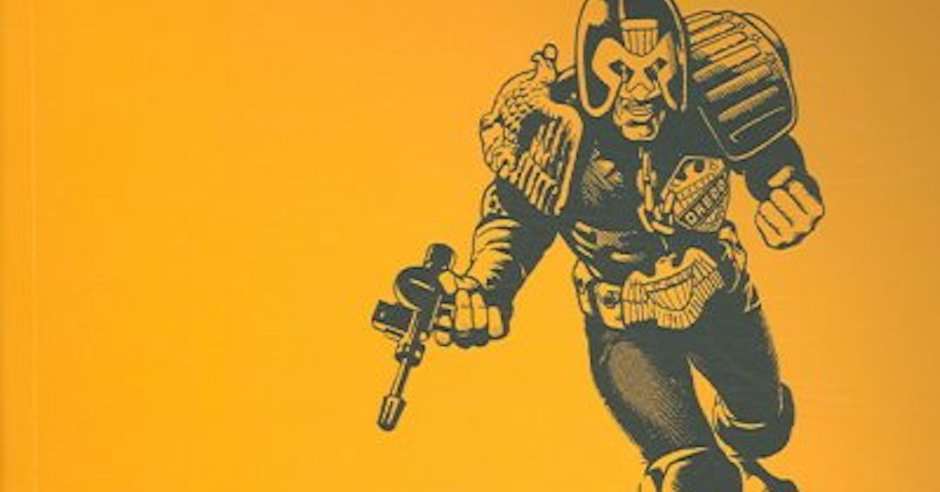 Judge Dredd: The Complete Case Files Volume 2 is probably where I would recommend readers of the classic British comic book character should “start.” While the first volume has some good stories, I think the second one is really a lot more of what readers eventually came from expect from the world’s most brutal lawman. It also has a more consistent vision of Mega City One, Dredd himself, as well as the kind of cyberpunk/dystopian satire that it wants to tell. 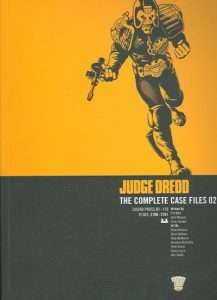 The two primary story arcs of volume two are “The Cursed Earth” and “The Day the Law Died” which had elements taken for the disastrous Stallone movie but are excellent on their own. “The Cursed Earth” is somewhat infamous story due to the fact rights issues resulted in it being incomplete. Basically, it has some satirical handling of McDonalds and KFC that resulted in the issues being pulled. Still, the story is largely episodic, and I didn’t even notice the missing stories in my readthrough.

The premise of “The Cursed Earth” is Judge Dredd having to cross the entirety of the United States on foot with his fellow Judges as well as a dragooned criminal named Spike. They’re delivering a vaccine to Mega City Two to stop what amounts to a zombie plague. Along the way they encounter sinister cults, cloned dinosaurs, giant rats, failed robot armies, and mutant psychics. For the most part, the stories are okay but only a few stand out like when Judge Dredd discovers a bunch of Kentucky hillbillies trying to stop a “vampire” feeding on their blood. A vampire that turns out to be PRESIDENT OF THE UNITED STATES!

“The Day the Law Died” is about Mega City One being taken over by the insane Chief Judge Cal. Cal is based on Caligula and not just in the vague sense but in the sense of having nearly identical features and many call backs like his foreign bodyguards as well as naming his pet his second in command. The story arc goes along a little too long and has way too many scenes of Dredd getting his ass kicked (including getting shot in the head which I am pretty sure would kill him) but is overall a solid story.

There’s also a couple of backup stories in Judge Dredd: The Complete Case Files Volume 2 that I’m not terribly fond of, including a story satirizing liberals concerned for the rights of criminals as well as a tale about Judge Dredd putting the fear of Grod in a bunch of hoodlums. Still, most of the stories you’re going to enjoy are in the two main arcs. I probably would have liked them more if not for the fact the liberals story feels a lot like how people who appreciate the Judge system unironically would view the world.

The characters are the best part of Judge Dredd, and we have a lot of memorable ones. Spike is a lovable contrast to Dredd and someone that I was unhappy didn’t become a permanent part of the strip. I also absolutely loved Tweak, the alien from a race that saw humanity and decided that contacting them was a massive mistake. Finally, Chief Judge Cal is one of the best villains in the entire franchise.

Judge Dredd: The Complete Case Files Volume 2 is a very good installment of Judge Dredd and better than the previous volume by leaps and bounds. The art is great and while black and white, manages to perfectly convey the world as well as violence.