The blurb for King of the Hollow Dark, shown below, reads like it should come with a record scratch and a voiceover that says something like ‘I bet you’re asking how it all came to this?’ In a lot of ways, it’s exactly that sort of self-narrated young adult coming of age story that Netflix absolutely loves. However, King of the Hollow Dark is a far darker tale than those tend to be and there’s not an obvious love interest to sell to the marketing department.

“Georgina Skyler Carey is not a necromancer. She’s the daughter of one. 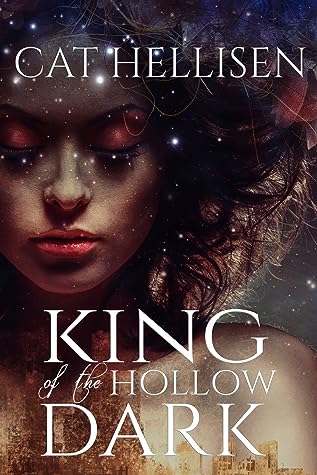 The story sees Georgina, a girl of college-age going through the motions of a painfully mundane life while dealing with the after-effects of her mother having been killed for necromancy when she was seven years old. To make things worse, she has headaches and memories from her mother’s point of view, which are getting more frequent and severe. Oh, and she seems to have a stalker who might be a ghost.

Her best friend Thalema is the lead dancer of the Umma festivities and this allows a neat exposition of the core worldbuilding tension between the Empress of Life and King of Death.

It turns out that George isn’t nearly as mundane as she thinks but is in fact, a pawn in the schemes of various powerful beings, including the Empress and her mother.

Along the way, we visit slums, witches, the islands of the dead and baronial courts in disused tube stations while being pursued by human-faced death hounds, shadowy government agents and do battle with multiple immortals-cum-anthropomorphic entities.

The worldbuilding in King of the Hollow Dark is simply delicious with the city of Umma-Lukaya being rendered beautifully with it’s winding streets, distinct districts and colourful festivals being conjured in evocative prose. Less definite but all the more otherworldly for it are the less-visited lands of the dead, from the grey beaches and burned out Baronies to the amorphous central city of Misterten-Next.

For all that King of the Hollow Dark appears like a cute coming of age tale on the surface, this is a deeply unjust world with slums and an authoritarian dictator who kills people’s parents, and where it is believed that ghosts can eat the souls of the living, a world where the stars themselves seem to be going out. Oh, and this is all before we get to the REALLY nasty manipulation and inevitable fight against entropy stuff.

While the core metaphysical concept of deities of life and death is by no means original and I can feel hints from a load of real-world mythologies and civilisations, nothing here feels wholly cut and pasted and there is a final twist to that cosmology that results in King of the Hollow Dark feeling like a fresh imagining which is very pleasant indeed.

On to our protagonist, Georgina who fills the role of feisty, somewhat unwilling and definitely not (to start with) aware of what’s going on heroine to a tee. Her mediocrity is torn between grief and duty and fear and you can see how she WANTS to be more but is both scared and bound into not being. Her best friend, Thalema is almost a polar opposite, confident, respectable and bright but also brave and generous to a fault.

Nobody else is so well realised, be it the Empress or the King of Death, her father or the various accomplices that end up helping Georgina along and that is absolutely fine because this is ultimately a story of one girl coming to terms with her place in the universe. As such, King of the Hollow Dark is quite a universal story, being about entropy, grief, loss and manipulation but also friendship, agency and sacrifice.

I said earlier that there isn’t an obvious love interest and to be honest, there’s no real romance in the book but there is an understated and awkward attraction alongside some of the most frantic action as well as a delightful depiction of platonic, queer relationships that might well be a lot more if we didn’t have to concentrate on the end of the world. There’s also the worst possible parental manipulation imaginable, so there’s that for balance…

Cat Hellisen writes beautifully with evocative descriptive prose that paints her world across the inside of your mind and makes you feel every ounce of emotion that Georgina experiences, whether through poetic deception a blunt piece of youthful snark.

I can see comparisons to Gideon the Ninth by Tamsyn Muir, the Sandman by Neil Gaiman, the DOMINION OF THE FALLEN series by Aliette de Bodard but also elements such as similar worldbuilding to the DARK SOULS series of games, all of which are high praise indeed.

King of the Hollow Dark is a wonderful story that will tear your heart out and ask you if you’ve got the will to put it back together.

Read King of the Hollow Dark by Cat Hellisen