Review: Kings of the Wyld by Nicholas Eames 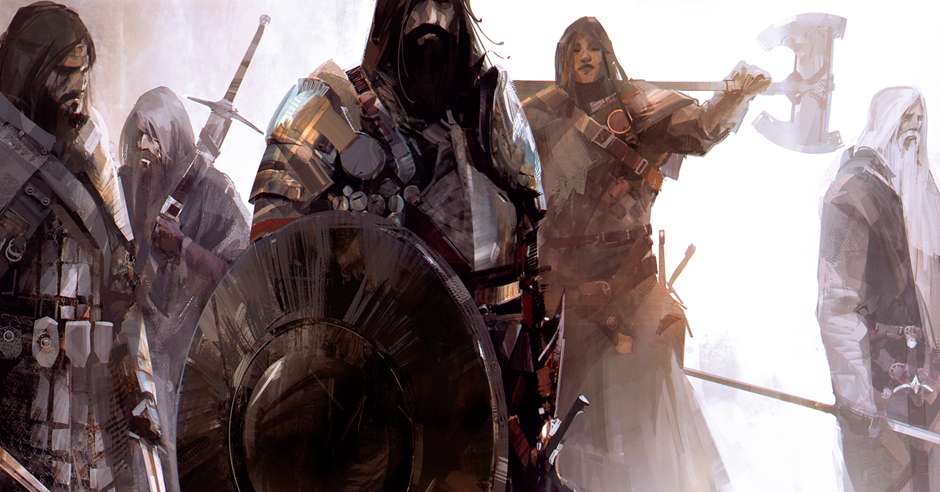 Kings of the Wyld by Nicholas Eames is the sort of book that sets out to make you laugh, and then accidentally makes you care along the way. In a world similar to D&D’s Forgotten Realms, bands of adventurers have become so revered that they’re treated like rockstars. Clay ‘Slowhand’ Cooper was in Saga, the most famous of them all, but that was twenty years ago, and now he’s settled down in a quiet town with his wife and daughter. But when Gabriel, his old best friend and the frontman of Saga, shows up on his doorstep with the revelation that his daughter is in mortal danger, what choice does Clay have but to get the boys back together and go save her?

It’s like a group of old rockers getting back together for one final tour, and starts out as an amusing look at how adventuring parties could be treated like rockers, down to the sureness that things were far cooler back in the good old days and these new kids don’t know what they’re doing. But the thing about Kings of the Wyld is that the characters are so well-crafted, the writing so solid, and the themes of getting old, friendship, loyalty and loss so well defined, that the story becomes much more than just a light-hearted romp with old warriors slaying goblins, and ends up drawing you in and refusing to let go until the end. 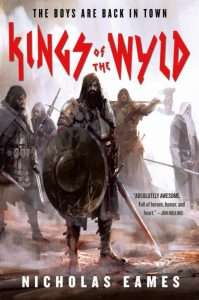 The characters are great, and Eames manages to pull off a whole-heartedly ‘good’ protagonist very successfully. Clay is tired and old, his back hurts and he just wants to go home, but he can’t abandon his brothers in arms. Joining him in Saga is Gabriel, formerly the band’s frontman Golden Gabe, although his gold is more than a little tarnished by the time we see him. There’s Moog, the scatterbrained but loveable band magician, Matrick, the rogue and pickpocket turned overweight king, and Ganelon, the brooding muscle of the group. The chemistry between them makes for some truly humorous banter and touching moments of brotherhood. They encounter some fantastic secondary characters, like an undead bard, a morally complex daeva, a vengeful ‘booker’ (essentially their crooked band manager) and a tragic villain one can’t help but sympathise with once you’ve actually heard his side of the story. My personal favourite of the secondary characters, however, was an ettin (a two-headed giant). The story of the ettin’s two heads Gregor and Dane, is genuinely touching. Dane is horribly disfigured and blind, but Gregor convinces him that he’s handsome, and that the horrors they experience are wondrous adventures. The touching way their interactions are depicted is one of the most moving things I’ve read recently, made all the more poignant by the fact that Gregor and Dane are monsters one wouldn’t think about just killing off in the sort of D&D game that clearly must have inspired the novel.

Eames has managed to lend a feeling of reality to the sort of larger-than-life, heroic fantasy setting that table-top gamers will be familiar with. This believable quality is perhaps due to the fact that we’re seeing it all from Gabe’s point of view, and he’s so thoroughly unimpressed by all the wondrous things he encounters. The ‘Wyld’, the sprawling, monster-filled, poisonous forest that the band must travel through is a particular highlight, filled to the brim with all sorts of nasties, and a few humorous surprises. Eames has also given his world a credible history and a reason for the existence of these bands of adventurers and the monsters that they exist to combat. Part of the draw of the novel is seeing how the world has changed since Clay’s time adventuring. It feels like an authentic, living world, which isn’t particularly easy to pull of with the ultra-heroic vibe of the book.

The silliness of some of the shenanigans, and the way in which Eames describes them, are reminiscent of Terry Pratchett, and Eames perfectly straddles that line between utterly ridiculous and unfunny. Clay is the sole point of view for the whole novel, and his simultaneous growth and consistency are endearing, as is the almost ridiculously pragmatic way in which he perceives everything. The humour is all the more humorous because Clay doesn’t find it funny.

Now, a caveat, Kings of the Wyld isn’t the darkest book, there’s a lot more light-hearted banter and shenanniganery than one would expect in a purely grimdark book. The protagonist, Clay, is a genuinely good guy, and not a grimdark protagonist. However, there couple of characters that are absolutely morally ambiguous, and it’s easy to find yourself conflicted over whether you’re rooting for the heroes or villains, and the lines between them blur. Because of this, and the fact that Eames is subverting the genre in a clever way with his ageing rocker angle, Kings of the Wyld would, I suspect, be extremely enjoyable for any grimdark fan.