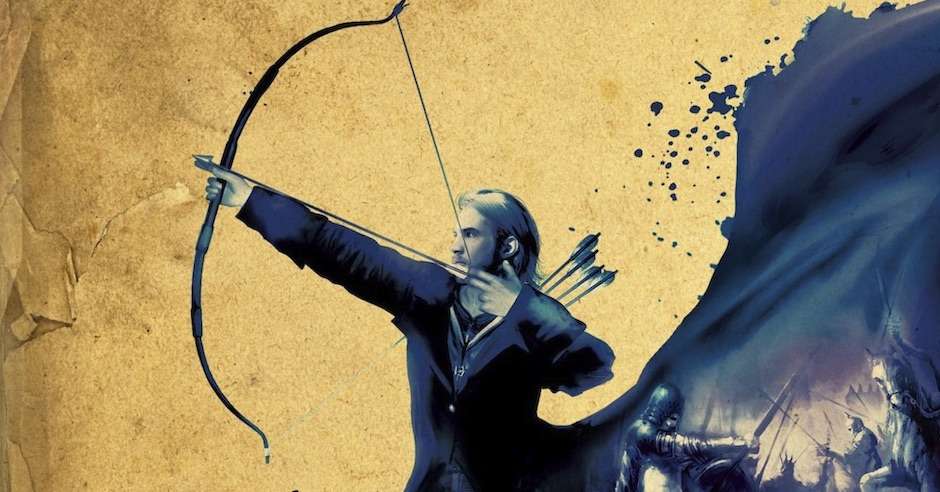 Fun, dark, witty, brutal. Knight’s Shadow is a masterpiece in fantasy writing that will put Sebastien de Castell on your favourite writers shelf. Knight’s Shadow, book two of The Greatcoats series continued from the unrelenting pace of Traitor’s Blade, but somehow manages to shift a few gears up. There is rarely a chance to pause for breath within this story, where Falcio, Kest and Brasti carry on with their adventure.

“Happiness is a series of grains of sand spread out in a desert of violence and anguish.” 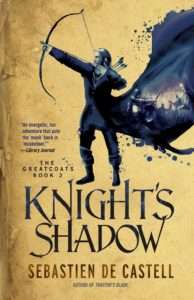 These three characters have some of the best dialogue in fantasy that I have read. Sebastien is as consistent at writing fun, witty and thought provoking dialogue as Brasti is at making an un-modest but hilarious remark about anything and everything. Each page containing these three was a pleasure to read (or listen to, this was an audible listen, Joe Jameson did a superb job).

We follow the changing band of Greatcoats as they are thrown (or seemingly run, walk, shuffle and even amble) into danger, political intrigue, swashbuckling and breath-taking action sequences, duels, immense torture, philosophical conversations and hopeless moments of frustration. There have been references through book one and two of The Greatcoat’s Lament, and the scene in this book is one of the darkest and most disturbing scenes I’ve read in fantasy. It made me feel sadness and sorrow that I really had not expected to feel from a Greatcoat instalment.

After having met Sebastien several times, I can see where his witty dialogue stems from. This story is full of moments that had me laughing out loud, much to the odd looks from people around me as I listened to Knight’s Shadow. I really love our three protagonists, and cannot wait to continue reading their journey. Also, a massive shoutout to characters who don’t have as much page time as Falcio, Kest and Brasti, but are equally as enjoyable and unique in their own rights. Valiana’s arc is a breath of fresh air, and Dariana is a force that matches Brasti in his amusing ways. Even a surprise appearance from my favourite torturer turned forgetful law-sayer.

Also, there had to be characters I hated in this story. In the words of Nigel Benn, I actually do hate them. De Castell did a fantastic job in making betrayals feel heart wrenchingly brutal, and made the baddies just an even darker shade of bad. It is rare to find a book that really explores the ‘bad’ characters, their motives and own personalities. Knight’s Shadow did this brilliantly and really made me feel anger and sorrow.

There was a lot of to and fro and this story, travelling and a lot happened. But it was done in a fantastic way and I really am sold on this story. I’m also sat here wondering, can Falcio (or even Kest) have ANY MORE BAD LUCK?

The answer, presumably is yes. Yes they can.

5/5 – a swashbuckling adventure that will have you laughing, punching the air, squirming and pondering all of the ‘good’ and ‘bad’ in the world. Scenes that will shock people, and others that will make them root forever for the Greatcoats. Sebastien de Castell is brilliant.